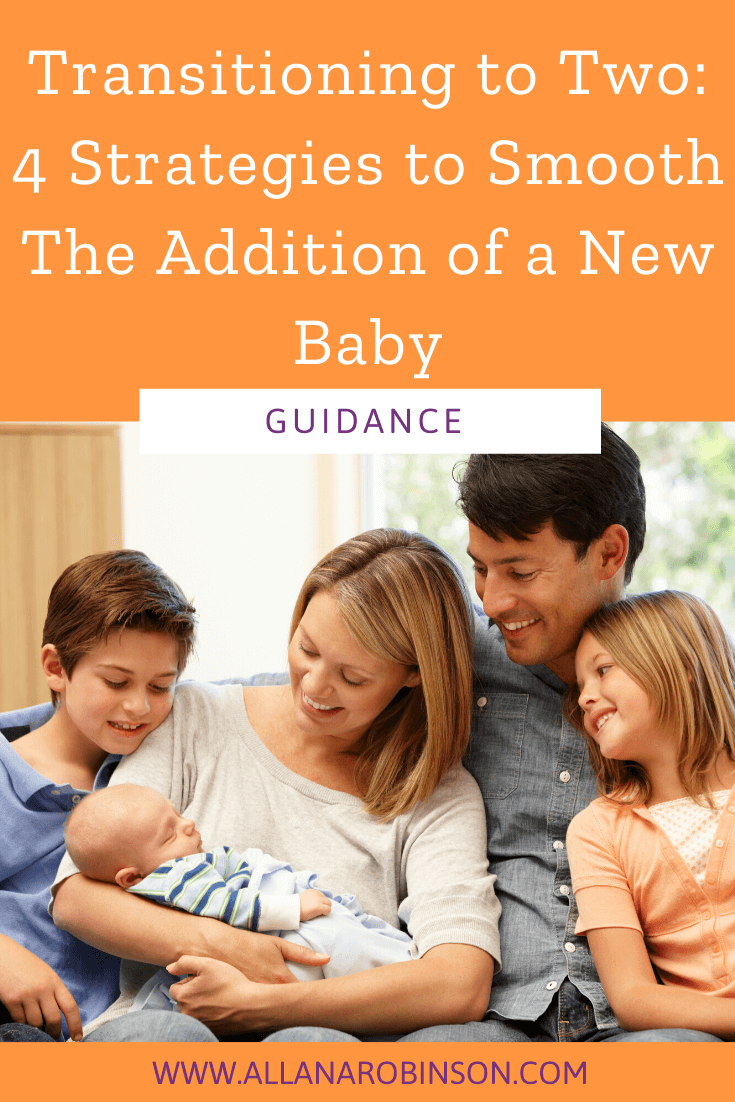 Transitioning to Two: 4 Strategies to Smooth The Addition of a New Baby

The day I saw those two little pink lines- for the second time- was more confirmation of my fears than anything.

But it was still a shock. I was pregnant with my second, and I was NOT ready.

To say this wasn’t the plan would have been a wild understatement. We’d just moved across the country with our 18month old and were settling into a new house, a new life, and I’d gone off on a bit of a wild hair the week before and gutted the kitchen while my husband was at work (lesson: don’t leave me alone with power tools and ugly, dated cabinetry.) So we were also knee deep in a DIY kitchen renovation. Not to mention my ever-growing client list…hello panic, nice to see you again.

Despite having been a Nanny and having done early intervention for more than a decade- having to care or TWO kids and transition from a family of 3 to 4 scared the pants off me.

How the HELL was I going to pull this off?! After the panic subsided I realised I had to do what I do best to get through this: create a strategy, a system, to get us from point A to B.

Recently in the Parenting Posse– my FREE Facebook community for parents of infants, toddlers, and preschoolers- a member asked for my top tips for transitioning from a family with one child to two- so here they are:

Not like- mental help, though if you’re suffering from PPD or PPA or like me PTSD- absolutely that too. Physical. Help. Don’t be afraid to call in the troops. Put EVERYONE to work- and one of the main jobs is giving the older one lots of attention. One of the biggest favours people did me when I had was a newborn was taking my oldest to the park. My Mom took him for a full week to her place. Friends had play dates set up for him almost daily. His aunties and uncles came in to just spend the day with him. It made him feel special, and it gave me breathing room.  DON’T BE AFRAID TO TELL PEOPLE WHAT YOU NEED. Sometimes you need to TELL PEOPLE, not ask. It’s okay to demand support. Because the flip side of it is- when your friends or family needs that- you’ll be there for them.

There’s a couple facets to this. The first is routine times like bedtime. If you have the luxury of time- start handing off as much of it to the secondary parent as possible. Now, in my home bath time is something that’s always been my husband’s “thing”…after being a Nanny and doing in-home therapy for over a decade, I’ve hit my fill of bath time. That’s his deal, and always has been. So for us, it was more a matter of backwards chaining everything else: teeth and books and getting dressed. All the stuff I did, we slowly transferred it to him in the months leading up to the birth. And we did this by first just having him in the room, then us taking turns, then him doing it with me in the room, then I excused myself entirely. Some stuff we were able to just hand off- but my oldest is a bit rigid about bed time so we had to use that process for everything. The result being that I was then able to bathe the baby, feed him, and put him down and have it coincide with my oldest’s routine being finished- and all I had to do for him now was go in, sing a song, and say goodnight. Now if baby’s already here you can still do this, but it may require you to push someone’s bed time up or down for a bit so that you have the breathing room to do so.

The other facet of this is adjusting your older child’s schedule so it kind of puzzles with the baby’s. Now, my youngest was a very different baby from my oldest and thankfully a wonderful sleeper. So in our case this meant making sure my oldest was napping at a consistent time every day- which gave me a solid frame of time where I could shower and tidy up and just baby snuggle without a tonne of interference. This also helped keep his mood stable. An overtired toddler is the worst thing when you’re in a transition. So making sure they’re well rested is crucial.

Yes, I’m sounding like a broken record- but now more than ever, firm boundaries are IMPORTANT. For two reasons: the first is that it makes children feel safe. And secure. Of course they’re going to boundary push because they need to see where their limits are.  But once they find them, and they’re firm, they can count on them and be confident in them. YES there are going to be extinction bursts, but we handle those how we always would.

The second is that it helps our children adjust faster. If it’s bed time, and sometimes Mommy brushes my teeth and sometimes she’s got to feed the baby- they’re going to push for their preference. Because sometimes they get it. If there’s a firm boundary that while Dad brushes your teeth, Mom feeds the baby they catch on relatively quickly that this isn’t a moveable boundary.

While in a state of transition list this, we have to really tighten things up in terms of what we will and will not accommodate. As we settle into this new reality and things even out- we can reintroduce more flexibility.

Handle misbehaviour consistently. After the birth of a new baby is not the time to be changing things up and trying new parenting techniques. If you want to make a change- do it BEFORE hand. There’s so much newness already after a baby is born. Consistency- mind numbing consistency- is key.

4) Get comfortable with strong emotions.

Your kids are going to cry. Accept it. They’re going to misbehave and be upset. Adjust to it. Nobody ever died from a bit of crying. Be it your toddler, or your newborn! Of course that’s not our goal- but it’s going to happen, so we need to expect it and be okay with it. Sometimes the preschooler is going to need your focus, and baby is going to have to cry for a few minutes while you deal with it. Sometimes baby is going to be hungry and you’re the only one available to feed them and your preschooler is going to be upset and crying. This is a state of transition. It’s uncomfortable. For everyone. And secondborns unfortunately don’t get that period of being the centre of the universe first borns do. We need to be okay with that. As long as you aren’t ALWAYS prioritising one child over the other, there shouldn’t be any jealousy or hard feelings.

Choose instances where your older child is making small, quick to satisfy demands for “their turn”. In our household that was usually drinkable yoghurts: my oldest always chose to ask for one just as I was getting ready to change a diaper or feed the baby. But- it was quick for me to fulfill, and my newborn wasn’t going to die of starvation or get an unbearable rash in the 60 seconds it took me to open the fridge, open the yoghurt, and hand it to my oldest. He got to see me prioritising his needs over his brother’s occasionally, which made it easier for him when the baby’s needs really were top billing.

Thanks to these 4 things, our transition to a family of four was much smoother than I could have ever hoped for. As terrified as I was- none of my worst nightmares came to fruition. If you’re about to make this transition with your own family take a deep breath- you can do this! And of course- if you want support from other parents who’ve gone before you- you’re welcome to join us in the Parenting Posse.