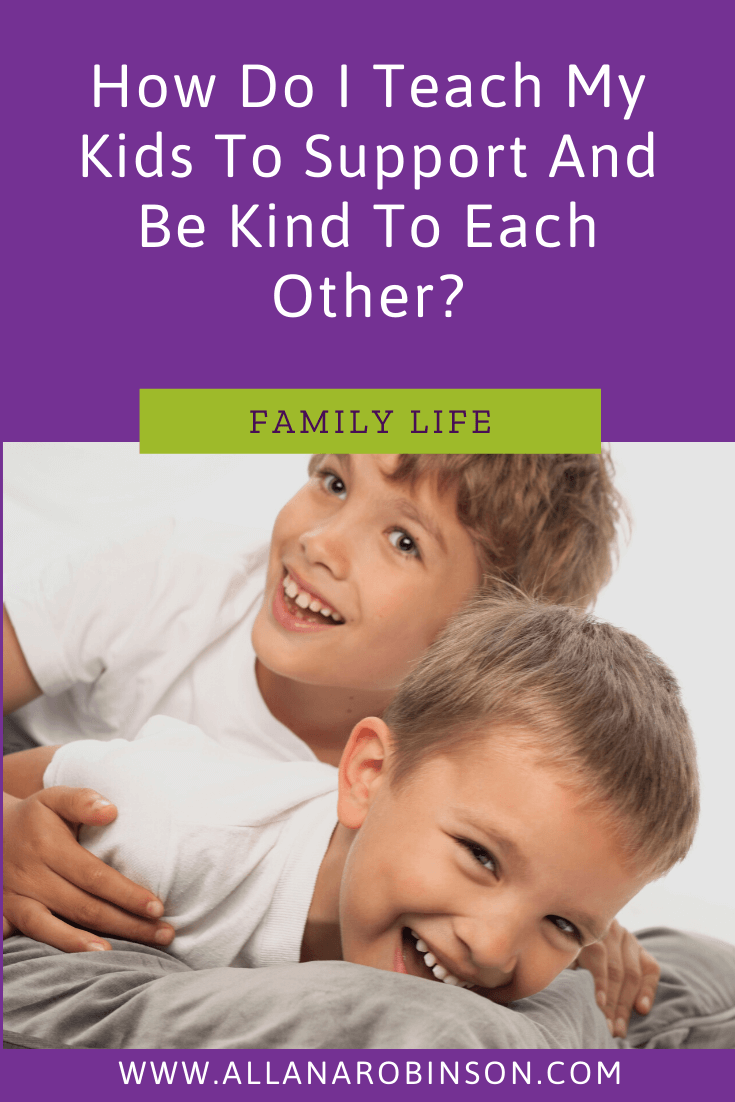 How Do I Teach My Kids To Support And Be Kind To Each Other?

My experience with siblings is pretty extensive.

I personally have a sibling, I have a younger brother whose personality is VERY different from mine. I was also a babysitter and Nanny for much of my post-secondary years so I’ve navigated a lot of siblings in that context as well.

While doing early intervention I was actually working in people’s homes, so you can imagine how it goes over when your brother or sister gets this special adult that shows up every day to play with them for 2-3 hours, so siblings usually had to be included.

Now I have my own two boys! I’ve applied everything I’ve learned navigating other people’s children to my own boys, and so far so good. They get along really well and they are genuinely each other’s best friend.

I have implemented a few things that have helped to make a difference in my home. I am sharing them in hopes that you pick you some of the nuggets to help improve your children’s relationships with each other, especially during this time of so much togetherness.

When my second son was born, we gave my eldest ownership over his little brother.

This doesn’t mean he’s in charge, but it does mean we really emphasize his role as the older, more mature one.

I am not talking about having your child-parent his younger sibling! It is his job to look out for his younger brother. As they get older, they’ll look out for each other. Since they’re 6 and 3, it is the oldest’s job to guide his brother and keep an eye out for him.

Sometimes this means helping him showing him what to do. Sometimes it means reminding his brother about the boundaries. Sometimes it genuinely just means alerting me to the fact that he needs attention. The flip side of this is that he understands that his younger brother is younger.

There’s no illusion of equality here.

Sometimes the little one has different needs than he does. Sometimes he gets to do to things the little one doesn’t because he’s older and the little one understands this dynamic too. He looks to his older brother for help, and he gets it when things aren’t exactly tit for tat.

When that causes upset we use a lot of empathy, but it doesn’t change anything. This also has given the older one a sense of pride about his little brother. He sees his accomplishments as a point of pride for himself too.

The younger one wants to make his older brother proud so he makes an effort. It’s very much a master/apprentice relationship between them and I think that that’s really one of the reasons they get along so well.

As they get older, that will even out to a bit more of a equitable relationship.

The more we reinforce turn-taking, the happier my kids are to share with the other one. The less they nag each other and pester each other, because they often know that the other one will not feel quite so inclined to give up what is they want if they do.

It also helps them communicate because we’ve walked them through the script for how to ask for something so many times in the process of teaching them to turn-take. They’re now able to really articulate what they want and why, and for the other one to articulate when they’re going to be prepared to give it up.

I’m then not the one or their Dad isn’t the one who is doing the negotiating. They are between themselves., They’ve learned to be really independent about it. I don’t have to intervene much.

Third: Make Kids Talk To Each Other

As parents, we tend to become this like messengers between our kids when they’re upset.

This is not serving us or serving them, because they begin to rely on us to deal with the other one.

If my kids are upset and come to me or my husband to be their mediator, I don’t mediate, I make them discuss it between themselves. The only thing I’ll do is reinforce what they’re saying.

So for instance, this morning my 3-year-old came running into my office complaining that the 6-year-old wouldn’t let him watch whatever it was he was watching on his tablet.

I walked the little one back to the big one and said, “Hey, Owen has something he wants to tell you.”

Owen said “I want to watch…let’s go with Ninja Turtles because I can’t remember…too!”

My 6 year old ignored him so I said “Did you hear him? He said he wants to watch too.”

Then he started protesting to me so I said “I’m not the one who wants to watch- Owen does, talk to him.”

So he turned to his brother and said: “I just need some alone time.”

Owen said “Oh. I really wanted to cuddle with you.”

Big brother was like “Oh, okay, we can cuddle and watch together.”

I still need to initiate it like that sometimes, but more often than not. It’s really just a matter of getting them to speak to each other, rather than at me and expecting me to hand down a decree that has to be followed.

This means there’s a lot less resistance because they came to an agreement, which means I don’t have to enforce it.

Fourth: To Their Respective Corners

We have two play spaces in our house, our basement, and their bedroom. The general rule is that if they can’t get along, they have to go “to their corners.” Anyone can call “to your corners.”

Often it will be me who hears things escalating and say “Okay, this seems to be getting out of hand, time to go take some time in your corners.”

Often one of them will say “I’m done playing, we need to go to our corners.” They alternate who goes where, because they share a room. One will go to the bedroom, the other will stay in the basement. The next time they swap.

The idea is making them autonomous and having a standardized process for them to get some alone time. Sometimes they’ll set a timer and put it where they can both hear it. More often than not they just start interacting again when they feel like it, they aren’t “banished” to their corners. They just can’t go in the other’s corner.

For instance, sometimes my 3-year-old will fall asleep when he’s hanging out in their bedroom, which is fine. My 6-year-old doesn’t have to stay downstairs until he wakes up. He just can’t go invading his space, that space is his space until he’s done with it.

Something you may have noticed is that all of these things have kind of a standardized process to them. We do the same thing every time.

The LCP having a standardized procedure for working out conflicts, making decisions, getting alone time, it makes things a lot simpler. You don’t have to follow the way my family does it. You can make up your own procedures, but having Standard Operating Procedures makes it consistent.

It’s impossible to favor one child over the other, it makes it predictable. They know exactly what’s going to happen and how, and it makes it easy to follow our family norms.

Often we say to siblings “be nice to each other!” but we don’t really ever teach them what that means, and often what we unintentionally teach them is that being nice to someone means giving them things.

Giving up something you want for something they want, whether that’s an object or your own comfort. That’s not true.

The definition of kindness really makes children more selfish because it’s human nature to want to look out for one’s self!

By setting systems in place where they are able to maintain their boundaries, engage in a master/apprentice relationship, and solve conflicts together there’s a lot less competition, a lot less getting on each other’s nerves, and a lot less resentment.

I’ve said most of these things in the context of my own children because that’s my most recent experience. I’ve used these same principles with kids for well over a decade now, and they’ve all responded the same way.

In fact, practicing these skills at home with a sibling is really beneficial because they’re a built-in peer. Especially when I was doing an early intervention, it was really helpful to establish these norms at home, because then it was easier for the children I worked with to generalize it out to their peers at daycare, preschool, and kindergarten.

It takes a bit of time to set things up, but it is effort that’s not wasted.

I hope this gives you some ideas for how to to tweak what you’re doing, establish some new processes with your kids, and hopefully survive this social isolation business with a bit of sanity intact.

Don’t get wrapped around the axel about trying to do everything perfectly right now.

Don’t put that pressure on yourself.

Just take it one day at a time.

If you want some more ideas of tweaks you can make that will improve your quaratine behaviour plan, make sure to grab my scripts for Managing Crazy-Making Behaviour.

If you’re past the scripts, you’re ready to really use this time at home to build some solid skills, come and join us in ParentAbility. We’re here and ready to support you and get a do-able plan in place so you can make the most of this situation we’ve all found ourselves in, without it taking all damn day.