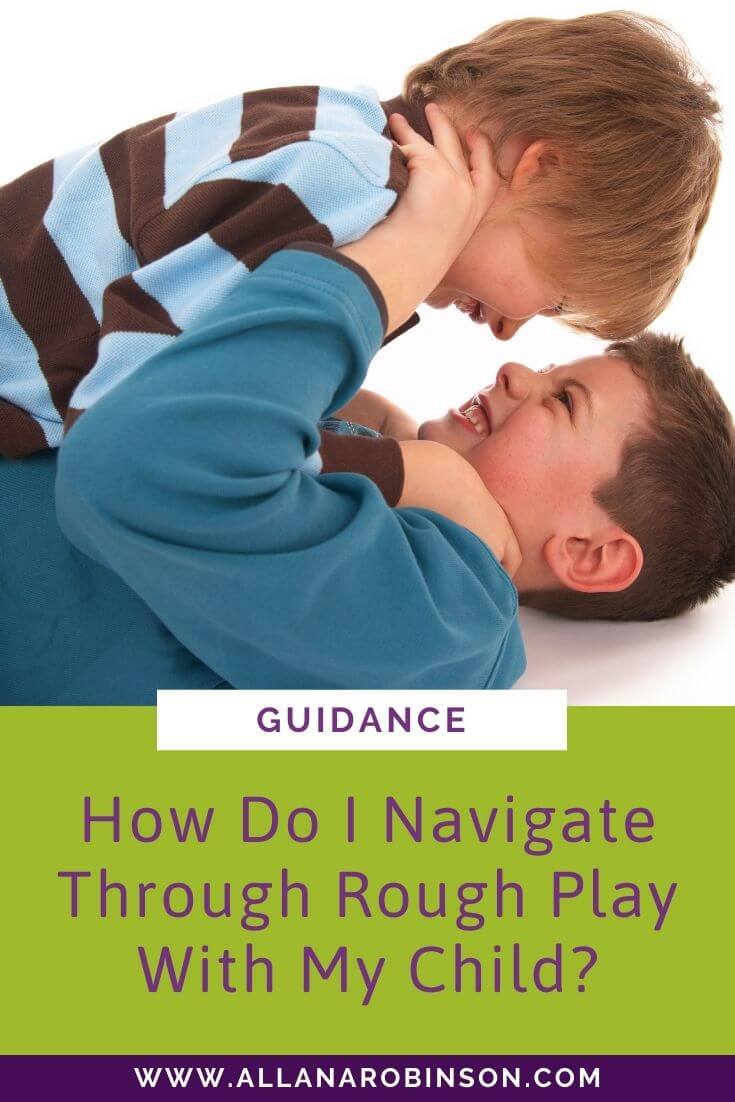 How Do I Navigate Through Rough Play With My Child?

Rough and tumble play and consent has come up a lot in the Parenting Posse. As a Boys’ Mom myself, I get it. Rough and tumble play is literally a part of your everyday life, whether you have boys or a spirited girl. If you’re the Mom of genteel boys or girls, this blog post may not really speak to your heart.

I know there’s this instinct to not allow it because “someone might get hurt.” Bumps and bruises are a reasonable risk. Rough play actually plays a very important developmental role for young kids who want to engage in it. Stop stopping it! The brain will find a way. It’s like kids who are climbers, you can’t STOP the climbing – it’s a developmental imperative that they need to climb to make whatever connections their brain is busy making.

You can glue their shoes to the floor but the brain will find a way! As a general rule: stopping children from doing things they’re naturally inclined to do is doing actual harm to them. It hurts them. Children don’t just do things for shits and giggles – they do it because there’s a purpose behind it. We may not be able to see that purpose, and they may not recognize the purpose behind it, but that doesn’t mean it isn’t purposeful.

It helps them develop emotional intelligence. It helps them learn to make sound judgments. It helps them learn how to deal with boundary crossing. It teaches them how to cooperate and be altruistic. There have been studies on many different mammals that show that when active, rough, ‘play fighting’ type of behavior is suppressed, those animals grow up miscueing social behaviors.

In other words your children won’t be able to differentiate when someone is being genuinely aggressive or playful. They won’t understand the normal give and take of social situations and will generally develop violent impulses later in life.

It’s important that we recognize that rough and tumble play and genuine aggression are different.

Play fighting, wrestling, make-believe aggression, and shouting are not real aggression. Intent plays a huge role here. And you can generally see that children are play fighting vs. genuinely fighting because they’re smiling.

What happens when it starts as play, or was intended as play, but the other person either isn’t having fun anymore or someone gets unintentionally hurt? Well, that’s why it’s important that we establish the concept of consent with our children.

Dads – this is generally in your court.

As a very generalized rule – Dads tend to be the ones’ children rough and tumble with. If you are the person your child likes to be rough with, it’s on YOU to teach them this stuff. That doesn’t mean that if they’ve moved on to play fighting with peers that you can’t teach this stuff, it’s just much easier to teach when it’s with you. It’s easier to build strong habits from the ground up than to change the old ones.

Teach your children that we CANNOT TOUCH OTHER PEOPLE WITHOUT ASKING FIRST.

This doesn’t always have to be a verbal ask – we often ask people if we can touch them by just holding our hand out and raising our eyebrows. It’s the human version of a play bow, but that’s pretty subtle for little kids. So start by teaching them to ask outright. “Do you want to wrestle? Do you want to sword fight? Do you want to fight?” That means if you are play fighting with them you have to model it, “Do you want to fight? Yes? Great.” If your children are playing with peers, stop them and ask them “Did you ask your friend if they’d like to fight with you?” Teach kids that before they touch someone they have to get consent. Period.

Once you have the consent to touch them, then we need to establish boundaries around it. This is exactly how we’d like them to navigate sexual encounters when they’re older as sex is another form of physical play. We’re laying some HEAVY groundwork here. We’re parenting in the age of #metoo and if we want our children to never have to say those words in that context we need to be raising them with these habits, not introducing them when they’re 18.

So we’re going to teach them, again either through modeling when we’re playing or by walking them through it when they’re playing with someone else, to establish boundaries around the touch:

“Can we punch? Can we kick? Can we push? Can we slap? Can we use our elbows? Where? I’m not okay with you punching me in the head, so no headshots okay? Erin is telling you she has a sore arm already so no hitting people’s arms today, okay?”

Empower your children to suggest rules and to reject rules if they don’t fit within their comfort zone. I always teach my boys to end rule-making by summing the rules up and saying “Those are the rules today. If you break the rules, we can’t play anymore.”

And then they can go HAM!

They now know that the other person wants to be touched and how and if they break the rules, it stops. Or in a group setting, the child who broke the rules is no longer welcome in the game. That teaches children that if they don’t play by the rules there are social consequences, LOGICAL CONSEQUENCES.

That doesn’t mean they can never play again! Or that they can’t reinsert themselves into the play by apologizing and re-establishing new boundaries. To quote Dr. Stuart Brown: “Play allows ‘pretend’ rehearsal for the challenges of and ambiguities of life, a rehearsal in which life and death are not at stake.”

By having them take small, reasonable social risks now, we safeguard them against BIG SCARY social risks when they get older.

Another quote, from Gerver Tully, “the best way to learn to be safe is to learn how to judge danger.”

What do you do when they DO hurt each other? I created a blog post about this process and below here is the link to grab my Scripts for Managing Crazy-Making Behaviour. If you like these little scripts “what to say when and how” tidbits I’m giving you, there’s 10 of them in that script pack and it covers the behaviours the Parenting Posse told me where driving them most up to the wall.