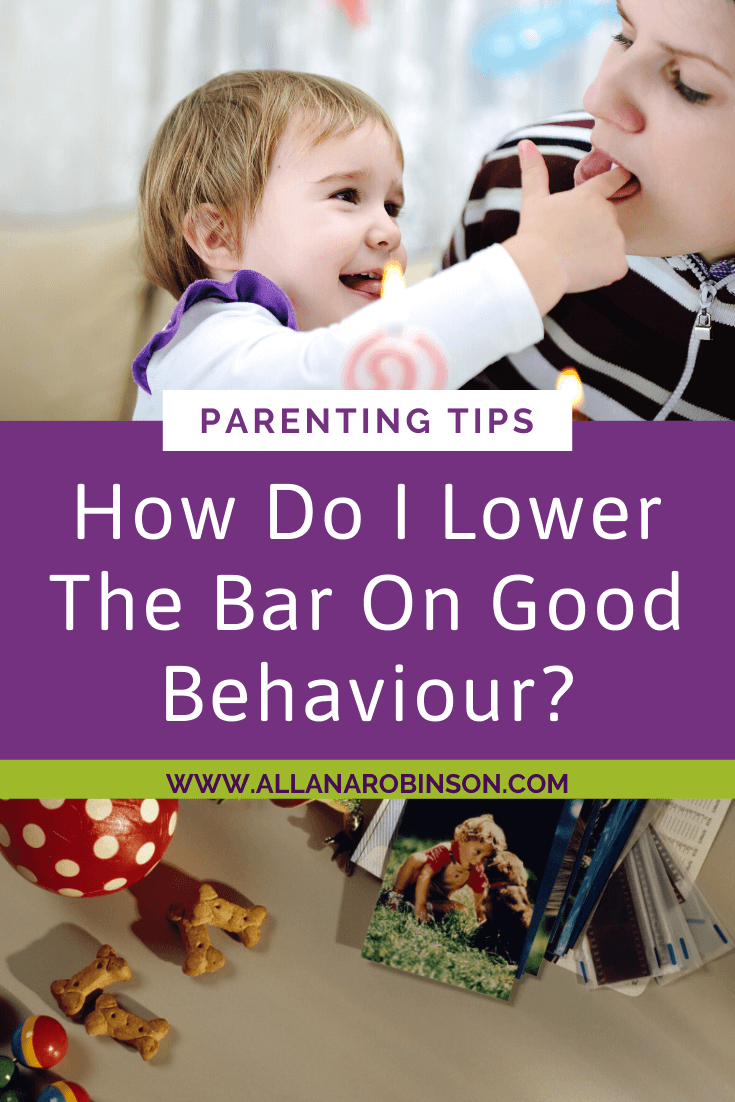 How Do I Lower The Bar On Good Behaviour?

How’s life?! Pretty much the same as last week? I feel you.

This is getting harder and harder. Let’s talk about lowering the bar on behaviour.

Last week I’ve been getting a tonne of emails from cabin-fevered parents with cabin-fevered kids saying multiple variations on “I’ve taken your advice, I’ve lowered the bar, and they’re still acting stressed, what gives?”

After reading several very detailed emails, and I’m sorry, I can’t answer all these emails personally, I am reading them though. After reading several pages, plus long emails that detailed what I consider the best case scenario, it occurred to me that a lot of you don’t know what “working towards good behaviour” looks like.

I think for most people, good behaviour looks like children playing independently quietly and never stepping a toe out of line, listening to all directions, being articulate about their boundaries and feelings, eating all their food, and being grateful for the opportunity to do all of it.

I’m sorry, but that’s an impossible bar for an ADULT to reach, let alone a young child.

Yes, we all have these moments where we’re absolute angels on earth, but that is not the status quo for anybody, other than possibly Stepford Children.

I’d like to give you an example of what most people would consider a massively poor behaviour episode my son had this weekend. Why I’m actually really proud of him, because it’s the easiest way I know to be able to articulate the perspective that I see good behaviour from.

On Easter Sunday, just two days ago, everybody in my family woke up on the wrong side of the bed. Easter is usually a pretty special day in our extended family, we all get together and eat a huge meal, my kids go to Church with my parents, everybody visits, there’s a big egg hunt in the morning, the kids get lots of attention.

We were all mourning the loss of that, along with the fact that a major low-pressure system was running through our area and my kids have unfortunately inherited my husband’s and my sinuses. Whenever there’s low pressure around everybody has a sinus headache.

My husband and I decided that we’d make Easter special in a different way this year and we declared a TV day. We turned on Disney +, we turned the screen time limits off on their tablets, and we said go for it. We put out nibbly snacks like popcorn and make pizza for lunch. It was all very cozy.

It was going great until about 2:30 when my son Logan, who is 6, chose a game on his tablet that was just a bit too hard for him. While it started out okay, it got too hard too fast for him. He started to get really agitated. When I noticed it, I asked him if he needed a break and he said no.

Over the next 10 minutes, he continued to escalate. I went over and tried to co-regulate with him, get him to show me what was happening in the game, and either guide him through it or convince him to put it down and take a breather.

He wanted nothing to do with me, he yelled at me to go away, leave him alone, he wanted to do it by himself…and then he lost it. He stopped himself from throwing the tablet, which impressed me, but he was sobbing, he was screaming, he was yelling at me to go away.

I did just that. I walked over into my office, brought up my Amazon Parents dashboard, and I shut the tablet down remotely. He lost it again, ran into his room, yelled at me that he hated me, closed the door, told me not to come in.

I said okay and I went to have a shower, and while I was in the shower he calmed down a bit, went downstairs and asked his Dad to turn his tablet back on. Dad said he couldn’t because the tablets are connected to my Amazon account, which is true. Then my husband got him into playing LEGO with him. B time I came out of the shower he was back to normal and all was well with the world.

I know what everybody is thinking: “BUT YOU LET HIM GET AWAY WITH IT!”

“You just allowed him to scream and yell at you, that isn’t acceptable! I wouldn’t just shut down the tablet for an hour, I’d take it away and never give it back! I won’t be disrespected by my child like that, that ungrateful, spoiled child!”

I get it, but you’re wrong.

Once he was calm and I was calm and we’d had dinner, and he’d had a bath, I asked him if he would like to talk about what happened with the Batman game now, or tomorrow. He chose tomorrow.

The next morning I went and sat next to him before his tablet unlocked at it’s scheduled time and said “Hey, let’s talk about what happened yesterday before you tablet unlocks.”

It all came flooding out. He’d been tired, and his head hurt, and he was frustrated, and he really wanted to do the game all by himself and show Dad that he could do it (and I later found out that Dad had told him he was too young to play a SuperNintendo game he wanted to play, so that probably factored into that.)

When I’d come and suggested he take a break and he didn’t want to take a break, he wanted to keep trying until he could do it. Which, I mean, you can’t fault the kid for the growth mindset, right?

That’s stick-to-it-ivensss! Then I’d gone and shut it down on him when he was in the middle of trying and it had made him angry and frustrated and sad.

I said, okay, do you remember what it felt like when you started to get frustrated? He understood. I told him that when he feels that feeling, it’s his body telling him he needs to take a break.

He said okay, but sometimes I’m too frustrated to do that. I said okay, if you notice you needing a break, how would you like me to tell you?

He suggested that I not ask, I tell him that it’s time for a break in 5 minutes, and set a timer. I said okay I can do that. We agreed that if it doesn’t work we’ll talk about it again.

He’s had two episodes of frustration since then and I’ve followed the plan and so has he.

I’m REALLY proud of him!

He was able to calm himself down, articulate when he was prepared to talk through it, he showed great awareness of his emotions in hindsight. He was able to collaborate with me on a solution so it doesn’t happen again.

This is what I consider good behaviour!

I did it to reduce his stress.

He didn’t like it, and that’s okay. He had to hit a wall before he could calm down. He wasn’t being disrespectful, he was disregulated. He was in red and later brown brain. He needed his stressors reduced.

I know what his weak skills, and set-shifting is one of them right now. I was asking him to do something he didn’t have the ability to do, which was set shift off of his game.

On the whole Logan’s a pretty good billboard for me. He’s generally pretty adept at all this stuff. If he, at the age of 6, still melted down, stomped, screamed, called me names and needed a good 15 hours to regroup before he was ready to talk about it and collaborate on a solution, what makes you think that your 2,3,4,5 year old should be able to calm down faster? A child with less help, without any practice, and without you being aware of all those factors?

Let alone the fact that we’re in the middle of a global pandemic that has caused us all trauma? Let’s not sweep that under the rug and pretend it isn’t a factor.

Kids are human. They’re going to mess up.

They’re going to get overwhelmed, especially right now. They’re GOING to be dysregulated. Having a well-behaved child is not about them never experiencing stress or exhibiting stress behaviour.

It’s about being able to look critically at what did happen and collaborate on a solution so that it doesn’t happen again. To learn from it. Then if that solution doesn’t work, coming back to it again and trying something else.

It’s not about them having all the answers and being agreeable all the time. It’s a cumulative effect. Imagine if every time your child had a behaviour episode like that, you were able to move through it. You were able to help them learn from it, identify which skills needed more support, and make a plan to build those skills and solve that problem so that it doesn’t happen again going forward.

Children come up against new unexpected challenges all the time, they go through developmental leaps all the time. They have a lot more variables to account for and are much less equipped to manage those variables than an adult is.

At each instance of challenging behaviour as an difficulty navigating a problem vs some kind of character flaw makes it a lot easier to grow?

Their behaviour is not about us.

It’s got nothing to do with us.

It’s got everything to do with not knowing how to navigate a problem, and not having the energy to use the skills necessary to figure it out. Whether it’s because those skills are weak, or because they just really are literally that low on energy.

Wen I say “lower the bar”, I don’t mean just accept more challenging behaviour. Which seems to be how a lot of people interpreted that.

Remember, we’re all operating on lower than normal energy. We’re operating in pandemic quo. Everyone is in survival mode, even people in the best possible case scenario. This has had a huge impact on our kids and on us!

I know this is hard. I get it. I promise it is easier if you look at it from the perspective of what is causing the problem and how can we fix it vs.

What is your problem and why is nothing I do enough for you?

Thanks so much for being here with me today.