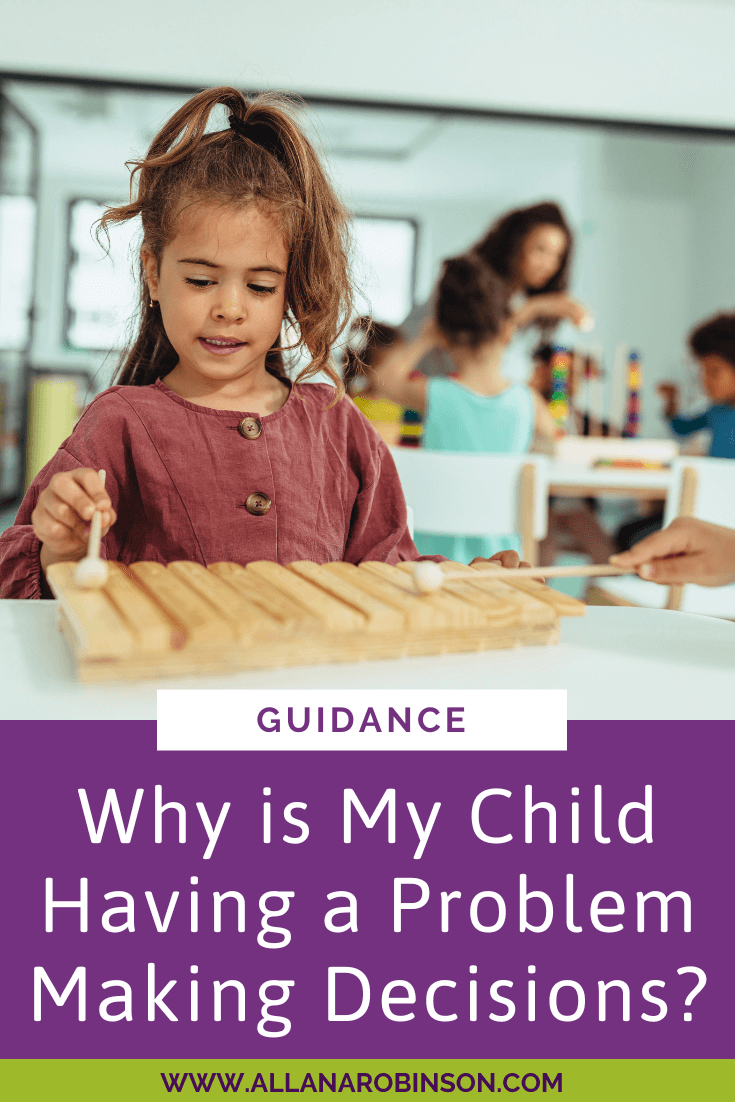 Kids who have difficulty making decisions!

Recently, Parenting Posse member Charlotte made a post about her daughter and how, whenever she’s faced with a decision, she gets increasingly anxious and upset.

This was causing huge problems because it was creating this cycle where her daughter would delay delay delay until the opportunity was no longer available, and then she’d melt down because she missed it.

I know this is extremely common because it comes up frequently in ParentAbility but we’ve worked through it with various families multiple times with success, so let’s talk it through.

Why do little kids struggle with making decisions, even when it’s just between two things?

Charlotte had specified that they’d tried reducing the options to just this or that and she still couldn’t do it until the time to make the decision was up.

Making a decision requires us to be regulated and to use our executive skills.

One is kind of contingent on the other if you’re not calm, you can’t access your executive skills, and making a decision requires almost all of them.

You have to be able to quickly think of all the different outcomes that these two options could result in, and if there are any other factors that might influence that.

You have to be able to think about how each of those outcomes could impact you and the people around you.

You also have to be aware of how much time you have to make the decision which is a different aspect of self-monitoring.

You have to be able to remember your options and all of those outcomes.

You then have to take those potential outcomes and all the factors that might impact you and others, and prioritize them based on your values and concerns.

You have to be able to organize all this information and your thoughts in your head.

Making a decision and doing it. ANY ONE of those skills being weak could completely derail a child from being able to make a decision they feel confident in.

Charlotte had mentioned that often she’ll try to talk her daughter through the decision-making process and make suggestions but they’re always dismissed.

This brings us back to regulation.

When a child is dismissing suggestions from adults before even really considering them, it’s pretty obvious that they aren’t regulated.

A regulated child if they’re struggling with using a weak skill, will still give you feedback.

“Sour, but what does that have to do with picking dinner?”

They can’t connect the information on their own- because their skills are weak.= but they aren’t dysregulated either.

A child who is dysregulated is just going to reject everything because the limbic system doesn’t have any reason.

If you’re trying to reason with your kid and you’re just getting stonewalled with “no, no, I don’t know, no I don’t want that either…”

You’ve got a dysregulated kiddo on your hands and you need to take the options off the table completely, go regulate them, and come back and try again.

This can become a vicious cycle.

Now you’re dysregulated, and you can’t access your skills to build them or use them.

This means the more you try to use them, the more dysregulated you get athis can go on and on and on.

It’s a cycle that most parents are stuck in with their kids, but very few are aware of it.

In ParentAbility, we stick a spoke in the wheel by first regulating a child.

Setting up that regulation cycle that is going to be a standard part of their day so that:

1. they learn to self-regulate and

2. they always have a refill of energy just around the corner.

Once we get them regulated, then we work on building up those skills using daily, fun, practice.

Most kids don’t get to use their skills unless it’s do or die.

There’s something on the line- people are watching them, they’re trying to meet an expectation and they can’t.

It’s not unusual for children to stall out when attempting to use their skills because now it’s associated with failure and stress.

By practicing them playfully in short increments every day where there’s no expectation, if you’re successful, awesome.

We start to rewire the brain to have a positive association with those skills while making them stronger.

I quickly want to mention anxiety because I know I’m going to get questions about it.

Anxiety is a biological stressor.

Anxiety is our nervous system’s inability to regulate in a fabricated or anticipated scenario.

You’re thinking about what could happen, and your nervous system is reacting as though it IS happening to you right now.

Some anxiety is expected and normal.

We all experience it when unpredictable or new situations come up.

Chronic anxiety, also known as clinical anxiety, is at a whole other level.

It’s often co-morbid with other clinical diagnoses such as depression, and it’s biological.

Your nervous system can’t regulate because of a hormone imbalance.

You can’t externally regulate a child out of clinical anxiety it has to be addressed medically.

If you’ve been trying to regulate your anxious child externally and it’s not helping, it’s time to talk to your doctor.

If you’re ready to come join us in ParentAbility– awesome- I strongly suggest you check out my free class first so that you have a full picture of our process.

If you know you’ve got to figure out this regulation thing but you’re not totally ready to jump into ParentAbility, go check out the Regulation Cycle Workshop, it’ll walk you through the basics of setting up a regulation cycle.