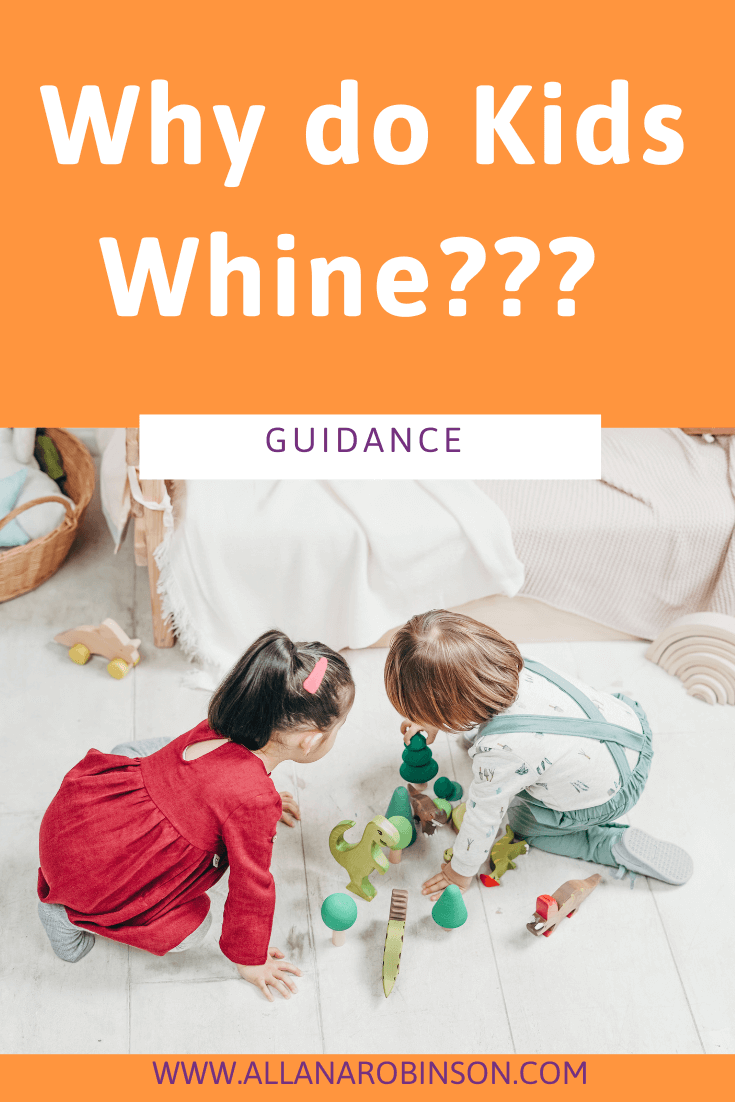 This has been coming up a lot since school started back up.

I’ve been getting DMs about it on Instagram, it’s come up multiple times in the Parenting Posse, I hosted an email AMA at the end of September and it came up in multiple responses there, and of course we’ve been working through it in ParentAbility. So let’s talk about it.

Whining…many parents, this is like nails on a chalkboard.

For me it’s the “Moooooooom!” whining that really frustrates me, but there really is never a good time for whining, is there?

Right now, it seems that a lot of parents are experiencing whining either first thing in the morning while trying to get their kids out the door to daycare, or in the evenings when they get home in particular.

One Mom who emailed me during my email AMA in September said “if I hear ‘she won’t let me have a tuuuuuuurnnnnn!” one more fucking time I’m a little worried I’ll give in to the impulse to toss them out the window.”

Why do kids whine? How can we address it?

If you’re a long-time MudRoom listener I’m almost positive you know the answer to this already:

I know! I know. I heard the chorus of “fucks!” ring out across the globe at that.

90% of behavior comes back to dysregulation.

What’s happening here is that there is a demand on your child.

Whether that’s a demand you put on them directly like asking them to follow a direction, or an implied demand through an established expectation.

Example: they share their toys or that they walk to school. There’s something they have to use energy to do and they don’t have enough of it to do it. They’re running on fumes.

Now the reason they’re running on fumes could be multiple things but generally it’s at least partially because they need to use an executive skill to meet that demand, which is on the weaker side.

When a skill is weak, it requires a lot of energy to use.

(Again if you’re a long-time listener, you already know this.)

This means that there’s three ways to reduce whining proactively:

we can either regulate our child proactively more frequently

we can reduce the demand, or

we can build up their executive skills so that they take less energy to use.

Regulating your child proactively more frequently is where we start in ParentAbility.

We start by establishing what I call a Regulation Cycle for a child.

To do this, we first have to figure out what a child finds regulating.

We do this through a lot of observation and trial and error.

It’s an unfortunate truth that for most kids, the things that work best to regulate them are rather disruptive or they require supplies that aren’t particularly portable.

The ones that work less well still work, just not as well, and they tend to be more portable and discrete.

Both have their place we just need to be aware of which is which and this allows us to work regulation breaks into our child’s day proactively so that they’re never running out of energy.

They’re never getting to that point where they run on fumes and can’t use their skills.

Reducing the demand means that we expect less from them.

Example: if your children are constantly at loggerheads over a specific toy that you own and turn-taking is constantly resulting in whining, you might get a second one so they each have one to play with.

You’ve reduced the demand that they take turns.

If your child is whining because they “can’t get dressed!” in the morning you might reduce the demand by dressing them except for one piece of clothing, or by taking turns with them.

We’re taking on some of the stress of the situation to reduce their stress.

We’re compensating for their lack of energy in this situation.

In ParentAbility we call these “bridging strategies” because they’re the bridge between point A and point B.

They compensate for the lack of skill or energy but they aren’t going to solve the problem long-term.

My personal favorite: “I CAN’T PUT MY SHOES ON!!!”

You might find their shoes and set them up for them, or get them to sit and put their shoes on their feet for them and then ask them to finish it off by closing the velcro.

The important thing with reducing the demand is that it’s a reduction, not an elimination.

Notice how in each of these examples I have the child finish off the task on their own.

They do the last step by themselves, that’s so that they finish feeling accomplished.

When children feel accomplished at a task, the next time they perform the task they’re much less likely to become overly stressed by it.

A lot of the “parenting hacks” you see on social media are actually bridging strategies or punishments.

Finally we have building up those skills.

This is where we practice our child’s weak skills with them daily.

The important thing with building skills is that you practice every day, and for a short period of time, no more than 10 minutes.

I have a whole MudRoom episode on why we say a max of 10 minutes but the short version is that if you’re asking a child to practice something they currently suck at, it’s going to take a lot of energy.

When they’ve used all their energy, they disengage.

Usually, you can tell this is happening because they start to get what I called the glazed doughnut look, their eyes go unfocused and they just start going through the motions.

The lights are on but nobody is home.

Practicing skills can be stressful in and of itself so I generally recommend to parents that they do a regulation activity before and after they practice because otherwise, their child won’t get the benefit of that practice.

The other important thing is to have fun with it. This shouldn’t be a drill.

This should be engaging and involve their active participation in a game, interaction, or activity.

The neat thing about building skills is once they get exposure to how to use a skill through more structured play with you.

You’ll notice that they start incorporating it into their free play and practicing it without your involvement!

How’s that for a parenting hack? Work your way out of a job.

What about when whining happens anyways?

Get the notion that your children will always be perfectly composed little people out of your brain because that’s FANTASY and it doesn’t exist. Kids have bad days, kids have days when they are low on energy because they’re tired or getting sick or are overwhelmed, kids are HUMAN BEINGS not robots, and they are learning to exist and navigate this world- so for every bad day you have, give them 3. It’s going to happen. So what can we do when it does?

Second- choose whether you’re going to reduce the demand, or regulate them. You can’t build skills in the moment- that has to be done proactively. And regulation is best done proactively too, but it CAN be done in the moment if need be. If you’re going to reduce the demand- great- offer to help them and define the last step they need to take. “Here, how about I help you? I’ll put your shoe on for you” [And do it while you’re saying this, don’t wait for them to agree with you- they’re dysregulated, they have no reason.] “And then you do up the velcro. There we go! All done!” High fives all around.

If you’re going to regulate them.

“How about we take a break and come back to this in a bit? Let’s go swing on the swing in the backyard for a few minutes and then we can try again.”

Hit the metaphorical pause button and take them to do something regulating for 10-20 minutes.

In general, it takes approximately 20 minutes for the nervous system to regulate.

Then obviously when you’re done come back to it.

Now, if you’re struggling to figure out what your child finds regulating, you’re not alone!

This is the most frequent feedback I get from parents: I get it, I need to regulate my kid before I discipline them…how do I do that? And previously, this is something I have taught in ParentAbility.

If you want to talk about it with other parents who are working through the same issue, I invite you to come join us in the Parenting Posse to talk it through.