Why are Kids SO Emotional?!

Parents use all these terms to describe their kids’ emotions. Angsty. Threenager. Sassy-pants. They’re these big balls of emotion, and to adults that can be very overwhelming.

Why our kids are so emotional, and how to handle it so that our kids aren’t scared of their emotions

Why are little kids so emotional?

Well, not to put too fine a point on it but their brains are under-developed.

When we’re in utero, the top level of our brain doesn’t start developing beyond grey matter. It’s there, but it’s not turned on. We have to get our big heads out of a relatively small hole which is why babies have soft spots, the head can squish.

If our neocortex was working it would get crushed and damaged. To prevent that, it’s there, but it doesn’t get turned on until we’re born and get this rush of hormones that do all kinds of things like tells our lungs to start breathing, our stomach to start digesting. Our neocortex turns on and starts learning. Our neocortex is responsible for all kinds of cool stuff like learning, language, knowledge, reason, and executive functioning skills. It doesn’t finish wiring up until about age 25. It takes a while.

However, the other parts of our brain, our limbic system, and our brain stem begin working right out of the gate. Our limbic system is responsible for our safety. You’ve heard me talk about this in regards to the limbic leap™ , but also our memories and emotions. It has no reason, it has no knowledge, it has no skills.

This means that for our little ones, their emotions are always more accessible than their knowledge and their language, and their reason. When in doubt, they’re going to lead with how they’re feeling vs what they know.

When we’re dysregulated if our brain either perceives danger or perceives that we don’t have enough energy to defend ourselves if danger shows up, it will stop sending resources oxygenated blood to our neocortex. It hoards energy for the limbic system because all that neocortical stuff is cool and all, but it’s not keeping us alive. When push comes to shove our brain will always prioritize emotions and intuition over logic and reason. Makes sense why it’s so hard to kick emotional eating and impulse buying and any other number of bad habits we have for dealing with our feelings, doesn’t it?

Now, as we age we learn ways to cope with our emotions, and our neocortex gets more mature. It has more ability to tell the limbic system  to simmer down when we feel something big that is objectively inaccurate. Little kids don’t have a mature neocortex that can go “we’re not in danger, nobody hates you. You’re just dysregulated and need a break.” Compared to the limbic system, it’s weak and easily overpowered, it’ll defer to it.

Which, in practical terms, means we have all these pint-sized people running around feeling all the feelings at 200%. There’s nothing we can do about that. It is where they are in their development.

This is why all the old-school “toughen up so they can survive in the world” crap…is crap!

All it does is teach children that their emotions themselves are dangerous, it doesn’t make them disappear and it doesn’t teach the neocortex how to manage the limbic system.

What can we do when our kids are so emotional?

First: validate, validate, and when in doubt validate!

We don’t want our children to be scared of their own emotions or perceive emotions as a threat.

When I was in early intervention I worked with this kid who had been having massive, very public meltdowns. When I got his case file my boss said to me “I think this is your match. Nobody has made any headway with this kid in two years.”

For the first month, I was working with him, I didn’t even attempt to do any work with him because he was chronically dysregulated. The first month all I did was focus on finding his calm and providing more of it. The second and third month we got like maybe 5 short periods of working on therapy goals in but that was okay because I knew if I could get him out of his entrenchment in dysregulation. We’d make progress much faster overall.

It was in month 3 that I had a huge breakthrough with him, because his Mom had offered for him to rent a video game from Blockbuster, just in case you’re wondering how long I’ve been doing this, Blockbuster still existed. He refused, which was odd. I kind of coaxed him into the Blockbuster and he was walking around covering his eyes, and he said “Lana, only tell me the available games so I can be a good boy.”

I was like “umm….what?” and this 5-year-old sighed the biggest sigh I’ve ever heard and was like “If I want a game that isn’t available I’ll feel angry and angry makes me bad.”

I launched into all his regulation strategies we’d been working on and he was like “no, if I feel mad Mom won’t let me get a game, even if I stomp my feet. Mad is bad.”

Keep in mind I’m having this entire conversation with a 5-year-old who is pressing the heel of his palms to his eyes. At that moment it hit me, he thought feeling mad was a problem.

He thought having that emotion at all was unacceptable. Here I am, sitting down in Blockbuster, to explain to him that it’s okay to feel mad. It’s what he does to show others that he’s mad that is a problem. He’s totally allowed to feel mad! He can even show he’s mad in all the ways we’d been practicing. He was blown away.

All these therapists and interventionists had been working with him for years and he had gotten the message that feeling any emotion other than happy meant he’d messed up. I’ve seen it over and over and over again with other intervention clients, and with my parent coaching clients over the last 6 years.

We want to make sure that we validate our kids emotions.

You’re mad. You’re frustrated. You’re really annoyed. You’re lonely. You really wish you could have that.

Name it, validate it.

Try to use richer language than mad, sad, and happy. Get an emotions wheel, there are thousands of them on the internet, and give them more precise words than mad, sad, happy.

My 5 year old told his kindergarten teacher recently that he was feeling ambivalent and yeah, that’s a big word for 5 year old. He used it accurately because I’ve labeled that emotion for him hundreds of times.

Children use words they’re exposed to, so give them richer language to identify what they’re feeling.

Second: Give your child a way to express that feeling safely

The magic of this is, it shortens the outburst.

Instead of screaming on the floor in Costco for an hour, we’ve had a 10-20 minute detour. Now the trick here is to not attempt to change how they express that they’re upset but to facilitate it in an appropriate way.

Kids do things when they’re upset that will regulate their nervous system.

If your child is a hitter, they hit because the act of hitting something provides their nervous system the sensory input they need to calm down. Trying to replace that with deep breathing or reading a book or squeezing a teddy bear isn’t gonna cut it.

We need to facilitate it. Hit the couch, the bed, a punching bag, the back seat of the car.

What can they hit and how can they access that?

If you can do those two things: validate and facilitate. You will see a drastic reduction in both the length and frequency of the outbursts.

What do you think?

This sounds simple, but it’s not easy.

It’s something we spend a lot of time on in ParentAbility. Some of our kids have really difficult emotional expressions to redirect. But the work is worth it.

If you need help figuring out how you could do that, we have tonnes of parents in the Posse group who would be happy to talk it through with you, or if you need more guidance, I’d encourage you to get on the waitlist for ParentAbility and consider joining so we can hold your hand figuring it out step by step. 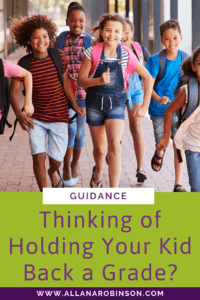