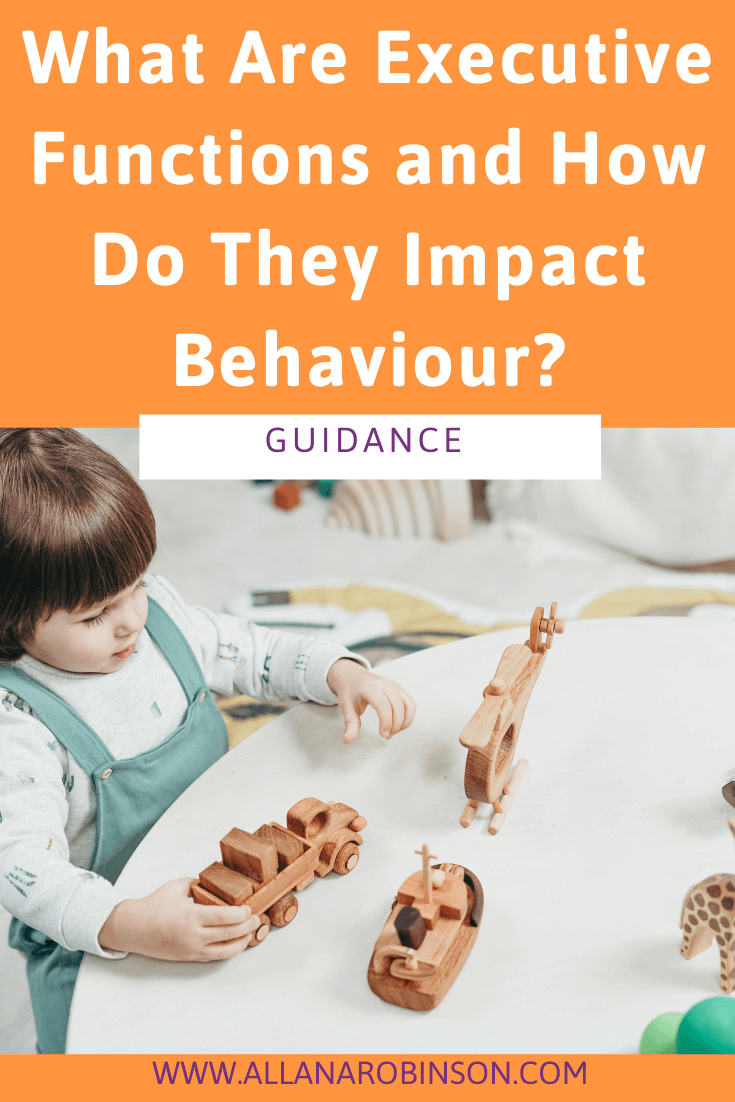 What executive skills are and why they’re so important to foster from a young age?

What in heaven’s name are executive functioning skills?

Executive Functioning Skills are, essentially, the tools our brain uses to do literally everything.

There are a tonne of different models for executive functioning but that’s what they all have in common: that they are a set of mental processes or tools.

It’s just a matter of how granular you want to get 45 skills is extremely granular, very precise, and mostly useful for fully grown adults who have disordered executive functioning in some capacity.

Three is much more useful for infants and young children.

Personally, the model I use and that we incorporate into ParentAbility identifies 8 separate skills: working memory, impulse control, emotional control, task initiation, planning and prioritizing, self-monitoring, organization, and flexible thinking.

I’ve found that that’s granular enough that we can be precise in our intervention it gives us enough information to really customize our approach but it’s not so granular that it becomes overwhelming, which is very important, because parents of young kids are, as a group, already overwhelmed enough.

Eightseems to hit the sweet spot of enough information to be useful, but not too much.

There’s a few things we need to know about executive skills in general:

First, Executive skills don’t BEGIN to develop until around age 2.

Before that, the brain has other things to focus on mainly language and regulation development.

They can’t do it.

Which shocks a lot of parents!

Most parents feel that children should already have some level of executive functioning by the time they can walk.

That’s not the case.

This is also the reason that 2-year-olds can be somewhat difficult because developing all these cognitive skills at the same time can be extremely taxing on the brain and therefore they’re using a lot of energy.

Just like any other more visible skill, once they figure it out they want to use it.

Just like once a baby starts pulling up you can barely get them to sit down, once a child starts figuring out how to use their working memory or how to use their flexible thinking they want to practice using it all the time.

Which can cause problems like suddenly proposing options you didn’t give them or that you can’t make a promise to them and bank on them forgetting in a few minutes.

They also cause problems because they need to be used in order to develop.

Theyr’e use em or lose em.

All 2-year-olds are weak in their executive skills because they’re just starting to develop.

However, you look at 3-year-olds for example we’re already starting to see that some skills are developing faster than others.

I like to use the analogy of cutting down a tree.

Imagine that I come to you, and I say to you I’ve got a tree that needs to be cut down.

Chop down the three.

You are willing and able.

Then I hand you a dull saw which is our weak tool.

Are you going to be able to cut that tree down as expected? NO!

Not because you’re defiant or unwilling or stupid or lazy or any other character flaw.

you can’t do it because your tool is weak.

You can try your hardest all damn day, and you’re barely going to make a dent in the tree.

At the end of the day you’re going to be exhausted you gave it your all but the task still isn’t completed.

This is what happens when we ask our kids to do something they know how to do, they have the time to do, the supplies to do and they just don’t do it.

One of the skills they needed to complete that task is weak.

What happens when I get you to sharpen that saw? To build that skill?

Well if you have a sharp saw and you put all that effort into it, you’re going to cut that tree down with relatively little effort and have extra energy left over to start on another one, right?

Second, Using our executive skills requires us to be regulated.

It’s not a chicken and the egg scenario.

We know what has to come first: regulation.

If I come and ask you to cut that tree down while all your energy is being expended on something of a higher priority like maybe there’s a hungry black bear roaming around the forest the tree is in.

It doesn’t matter how sharp your tool is, your focus is on making sure that black bear doesn’t come up behind you and eat you.

Which means you still can’t use your tool.

This causes problems when executive skills aren’t something that are actively fostered because often children only get the opportunity to practice these skills when it’s do or die.

There’s an expectation they have to meet.

They need to perform, even if they don’t have the energy to perform.

In which case one of two things happens: they refuse.

They stall out, become defiant, try to get you to do it for them.

They ain’t doing it.

Executive skills exist in our neocortex which isn’t actually necessary for life.

It makes us civilized human beings, but it doesn’t keep the lights on or the heart pumping for that matter.

When we’re low on energy, our brain shuts it off.

It reverts to using our limbic system which has no knowledge, reason, or skills.

It just has emotions, memories, and safety.

If they can’t access that part of their brain, the other thing that might happen is that they produce cortisol which is a stress hormone that acts as emergency energy.

The problem with cortisol is that it isn’t real energy!

It’ll give them the juice to access that skill at the level it’s currently at, but not to turn the whole neocortex back on.

Which means that they’re going through the motions in order to stay safe but they aren’t actually learning from it.

Which is why kids often won’t complete a task until you yell.

They aren’t regulated enough to use their weak skill, and when you yell you induce cortisol so they do it…

Bthe next time you ask they still can’t do it.

The third thing is that since none of these skills fit neatly in a box!

They can be broken down more granularly or clumped together more.

If even one of these skills is weak, if your child doesn’t have the energy to use one of the skills at any given moment.

They can’t complete the task at all.

For example: putting on your shoes requires you to use your working memory to remember the steps, and remember where your shoes are.

It requires you to plan and prioritize: to put the steps in order so you aren’t tying your shoe and then trying to put it on.

You have to organize: you have to get your shoes, put them on the right feet.

You have to self-monitor: you have to be aware of where you are in the process so you don’t do the same step over and over.

You also have to be aware of where you are physically in space so you’re not putting your shoes on in the middle of a mud puddle or even just in someone else’s way.

You need to use Flexible thinking: you need to be able to stop what you were doing and shift to putting your shoes on.

Finally task initiation to actually get off your butt and do it!

If any one of those skills is weak, the whole chain breaks down.

You can see how this dynamic causes a problem when you have a child who is just developing these skills, isn’t great at self-regulating, and doesn’t have the autonomy to take breaks or choose their own tasks.

This dynamic is responsible for most childhood behaviour issues.

This is why in ParentAbility we go through 3 steps:

The first is teaching kids to regulate.

You can’t access your skills if you’re dysregulated. Full stop!

This is what we focus on first teaching children the skills to calm their nervous system down and to recognize that it needs to be calmed down.

This is where building a regulation cycle comes in.

A regulation cycle is the stick in the spokes so to speak it stops the hamster wheel of doom of “skills are weak so I don’t have enough energy to use them, but then I don’t use them and they never get stronger.”

A well-regulated child will appear to be more competent than a child who has stronger skills but is dysregulated.

Part of this process is coming up with some strategies to reduce the need for our kids to use their skills, which I know sounds counter-productive, but when our focus is on regulation- demanding higher-level skill use isn’t going to move us towards our goal.

We come up with what we call “bridging strategies”…these aren’t going to solve the problem long-term, but it’s going to make life easier in the short term.

Once we have the child regulated on a fairly consistent basis, then we move to building up skills.

For just 10 minutes a day, we get our kids to engage in an activity, interaction, or game that requires them to use their weak skills in an environment where it’s safe to fail.

They aren’t hoarding their energy to protect themselves.

If you succeed awesome but if you don’t, that’s okay, no big deal.

This helps to make sure that they stay regulated while using the weak skill, and therefore that they’re actually learning from it.

Once these problematic skills get stronger parents can then back off of the bridging strategies, and their regulation cycle generally gets longer.

The windows of time between needing to regulate them get bigger.

Kind of like when a baby gets older and their wake windows get longer.

The better their brain gets at handling all the things it needs to handle, the longer they can stay awake.

Same with executive skills- the better their brain gets at using their skills, the longer they can stay regulated.

I hope that clears up the role executive skills play in children’s behaviour.

If you’d like to join us in ParentAbility and work through this process with me.