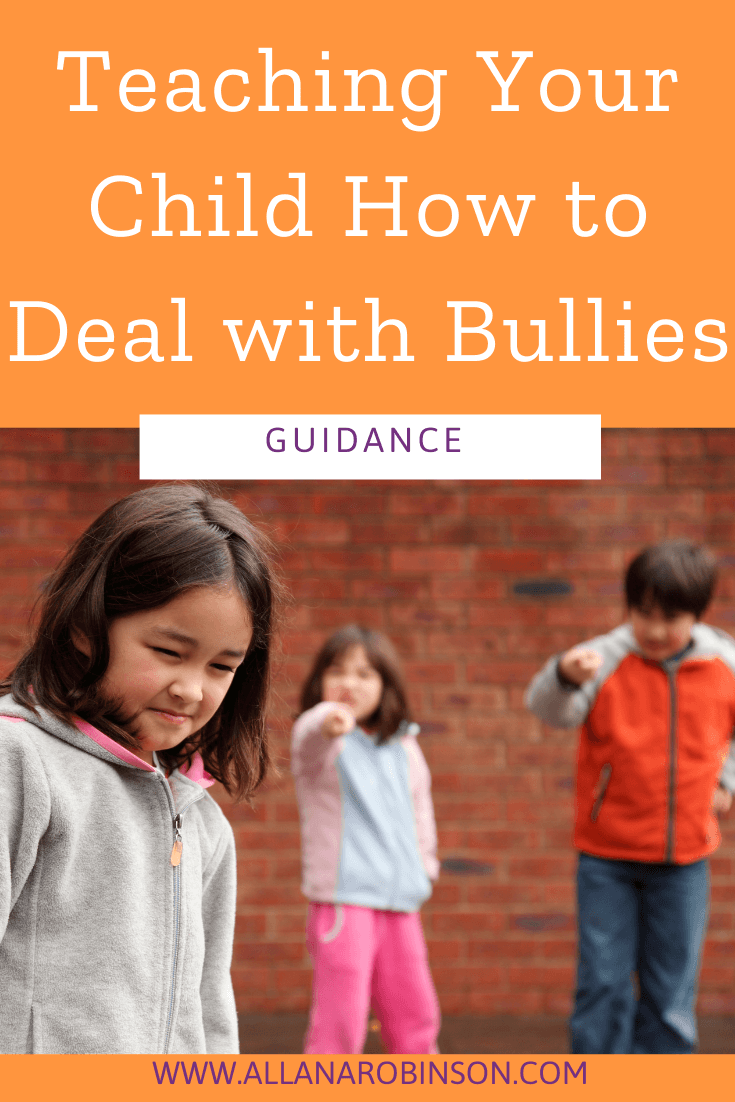 Teaching Your Child How To Deal With Bullies

Bullies are unfortunately a reality.

I’ve dealt with them, my sons have dealt with them. It’s inevitable and there’s nothing you can do to avoid them or help your child avoid them! Generally, when we find out that our child is the target of a bully, we immediately become Mama Bear right?

How dare they hurt my child, what is being done to protect my child, how could the parents allow this?

Our minds go wild and our focus is, naturally, on our own child because they’re our responsibility to protect. We naturally go into attack mode on the other kid/ parent because you want to defend your child!

I’m not judging anyone for this these are really base instincts at play here and nobody can avoid them. Not even me!

When my son told me a kid at school was physically attacking his friend, not even him, his best friend, I immediately got indignant and defensive. That’s how our brain is wired to work, in a hunter/gatherer society, if someone attacks your kid, you attack back.

So totally have your Mama Bear response in the privacy of your home. Be mad. Rue the people responsible by all means but after you’ve calmed down I want you to take some nice deep breaths and remember something:

Kids do well if they can…Even bullies.

The kid hurting your kid? That’s the best option they can think of to solve their problem.

Well, that’s what their parents and their teachers should be working together to figure out. Generally, they’re so panicked trying to mitigate the threat, and/or they have yet to discover that kids do well if they can. They’re working on punishments because they want to demonstrate to you and anyone else involved that “they’re doing something about it.” They’re “making the child pay.” But overwhelmingly, what I hear from my clients and parents on Facebook and Instagram, and my own experience reinforces theirs is that it doesn’t solve the problem.

In fact, if anything, it generally escalates it because we know that punishments don’t work. The bullying gets worse. The attacks get more aggressive or violent. The kids get more sneaky and generally, the result is that the kids end up getting separated. One of the kids changes classes or rooms, and the adults do everything in their power to avoid any contact between them. Which does generally work…as long as it’s sustainable.

If those kids come in contact again? If there’s only one kindergarten class they both have to be in at the local school? If suddenly the other kid needs aftercare and there’s only one mixed group for aftercare? Do they end up on the same soccer team or in the same swim class?

The problems are right there waiting for you.

It’s probably going to be up to you to re-focus everyone and you can do that by simply asking “What problem is this child trying to solve, and how are you helping him solve it without hurting my child?”

It’s a really powerful question because it generally catches everyone very much off guard. They’re expecting you to ask how the child is being dealt with what punishment they’re giving. This is a pretty useless question because generally, due to privacy laws, they can’t even tell you that!

All they can tell you is that it’s being dealt with.

When you ask “What problem is happening between these two kids and how can we help them solve that problem?” …that brings you back into the loop. It’s no longer us vs them. It’s no longer a that KID issue. It’s one that you need collaboration to solve. It puts you and the bully’s parents on the same team. They may not be able to tell you any more about what’s going on with the other kid- but it opens the conversation between you and the teachers vs letting them shut you down with an “it’s being handled.”

In my experience, most teachers have suggestions of how we could support our own child to no longer contribute to the problem. Not that I’m saying our kids are responsible for getting bullied they aren’t.

Like it or not, bullies don’t operate in a silo.

They’re part of your child’s community, and chances are there are some minor changes you can help your child make that will help reduce their vulnerability as a target. This can include simple things like learning to say stop loudly and forcefully.

This was at play with my oldest’s best friend. They were inseparable, but his BFF was the only one getting physically attacked. When I asked the teacher why she said my son had very firm boundaries.

If he was touched in a way he didn’t like he BELLOWED “STOP! YOU DO NOT HAVE CONSENT TO TOUCH MY BODY LIKE THAT!” and would physically push this kid away. After a few attempts, he stopped. His friend didn’t have that confidence yet. His response to getting attacked was to shut down.

We worked with both boys to practice standing up for each other and themselves. Now, in this instance, his friend’s parents did decide to move him out of the class but they still saw each other in the schoolyard and in public.

In fact, Logan actually befriended this kid and ended up teaching him how to appropriately initiate rough play with him and the other kids in the class.

My youngest’s bully was excluding him from all kinds of games that Owen was trying to involve himself in, but the other child was saying all kinds of inflammatory stuff like “no you can’t play with us” or “don’t play with him.”

Owen’s my youngest, he’s used to his older brother organizing the games, he was happy to fall in line with this kids’ game, but he just wasn’t being included. We started practicing facilitating games at home and teaching him how to organize games more intentionally. We practiced setting boundaries and expectations before playing a game and before long the other kids wanted to play Owen’s games more because they were safer. When the bully eventually asked to play, Owen knew how to set some boundaries while still allowing him to play so he wasn’t just turning around and becoming the bully.

Often teachers will say something like “they’re having difficulty sharing X toy” or similar. Great!

Can we get a second of those toys? Can I send in a social story about turn-taking?

My oldest had this issue because we do turn-taking, not sharing and another kid kept ripping the toy out of his hands when he was still using it. So by using a turn-taking social story, it helped this other kid understand why he wouldn’t just hand over the toy the second he demanded it, and how he could get that toy.

If I’d just freaked out about the fact that he bit my kid and my husband will attest that I had a nice little meltdown at home about it we never would have solved that problem. There’s so much we can do with our own children, even if we can’t be told the whole story but only if we ask the question of “what problem is this, and how can I solve it?”

All behaviour is communication. I know you’re sick of hearing it, I’m sick of saying it but everybody keeps forgetting!

Next time your child finds themselves in conflict with another child, I encourage you to ask “What’s the problem, and how can we solve it?”

Keep the focus on the problem that needs solving, not on the behavior that everyone wants to shun.

The small perspective shift makes all the difference in the world and leads to durable solutions that create a safer environment- both emotionally and physically- for our kids and for the bully!

No child wants to be the bully!

There is a more effective way to deal with it is to try and find a way to teach them to meet their needs that doesn’t involve hurting others but to do that we have to humble ourselves enough to be curious.

What do you think? Can you see how this is a more effective and durable way to deal with bullies?

This is definitely one of those situations where the theory sounds great, but when you go to put it into practice it’s rarely as simple as it sounded.

That doesn’t mean it’s not doable though!

You can always pop into the I’d love to hear your thoughts and continue the conversation in the Parenting Posse to talk it through.