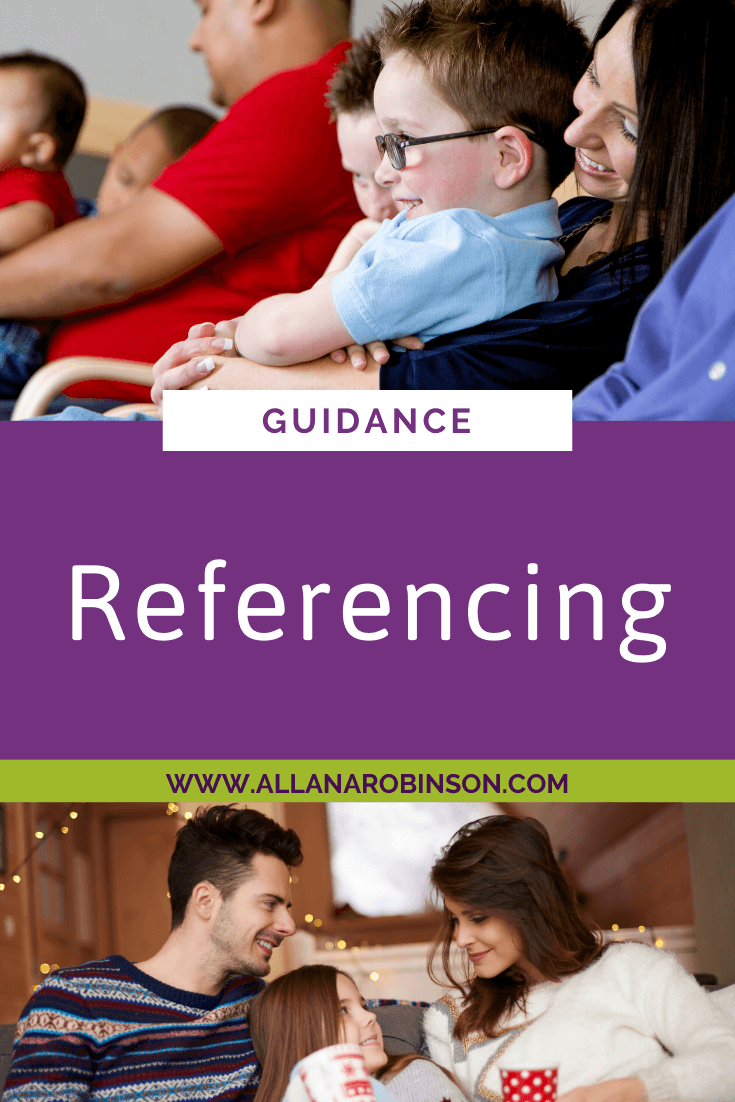 Our topic for today is something EVERY parent I’ve EVER talked to struggles with, and yet nobody seems to know what it is or why it’s important.

We’re going to be talking about REFERENCING. 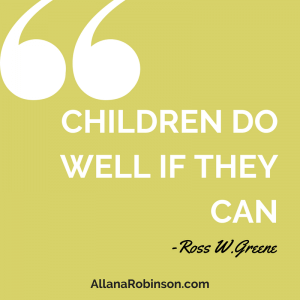 Most parents’ reaction to this is “YOU DEFIANT LITTLE SHIT!” It’s TRIGGERING for parents because it’s not like they didn’t hear your, or they didn’t understand you- they stopped, they looked at you, AND THEN THEY DID IT ANYWAYS! ARGH!!

Deep breaths. I promise you- your child isn’t evil incarnate. Don’t get me wrong- they ARE boundary-pushing- there’s no doubt about that. But there’s a very good reason for it. And I promise, once we’re done here tonight you might even be thankful for those moments.

So the reason your child does this is called referencing.

Basically, they’re looking to us- their parent, their model, their more knowledgeable other, their guide- for social cues. What’s safe, what isn’t safe? What’s acceptable, what isn’t acceptable? Am I hurt or am I okay? How do I behave in this situation? A really benign example of this is when a baby gets handed to a stranger. And they immediately whip around and look at you- and if you’re smiling and happy they’re like “Okay, this person is safe.” But if you look worried and tense they freak out and reach back for you. Whenever new Moms say something like “My Mother in Law is so upset because she won’t go to her….” My first question is always “How’s YOUR relationship with your Mother in Law?” Because typical babies and young children are REALLY ASTUTE at this and if you’re smiling tensely, they know the difference between that and when you’re genuinely relaxed and happy.

Another example would be when a toddler falls down and they don’t start crying until you go “OH no are you okay?!” Because they- very quickly- go “Well that was weird. OH NO MOM LOOKS UPSET I MUST NOT BE OKAY!” and they freak out. I had this happen with a toddler last week- I went and did a car seat check on Friday and as I was demonstrating the process for removing the slack from their thighs and while adjusting the chest clip I lost my grip on it and kind of poked the little girl in the cheek. And it wasn’t until I went “Oh I’m sorry!” that her eyes welled up and she started to cry. And when her Mom rubbed her cheek and said “Oh you’re alright, it was just a little poke. She didn’t mean to hurt you.” that she did one of those big shuddering sighs and was then totally fine.

And those are really obvious, really visible examples. But children do this for EVERYTHING. In fact- if your child DOESN’T reference, it’s a HUGE red flag for a number of developmental delays- the main one being autism. That’s actually one of the main characteristics of autism is that people on the Autism Spectrum don’t know reference naturally- they have to learn to do it. Just like everyone learns math or spelling. They need to learn that if someone is smiling at them, they’re expected to smile back. Or that smiling generally means someone is happy. Or that if someone says something to you in a snarky tone, it’s not intended as a compliment even if the words themselves are complimentary. And SO MUCH MORE- it’s one of those skills that’s like oxygen- it’s all around you and you don’t notice it’s there or how important it is, until it isn’t. So while I KNOW it’s got it’s annoying aspects to it- believe me, a child who over-references is a MUCH easier problem to solve than one that under-references.

So bringing it back to the situation where your child is doing EXACTLY what you just told them not to- what’s happening in that situation is that they’re boundary testing. Which, I mean, DUH, of course, they’re boundary testing. But there’s a reason behind it- because they already KNOW that you’re telling them to stop. They’ve referenced you enough to KNOW that you are not okay with whatever it is they’re about to do. The reason they then reference you and do it anyways is that they’re testing a theory.

What happens if I do it anyway?

Can I get away with this?

What exactly is she going to do to stop me?

Because kids are little scientists, right? They use the scientific method to create hypotheses and test them. That is literally THEIR JOB. What variables affect whether I get the screaming and yelling or the calm Mary Poppins version? This is why it’s SO IMPORTANT to be consistent because when we’re inconsistent we give them all these extra variables that they need to test. And I tend to see this behavior most right after a child’s had a cognitive development leap. Because they are very literally aware of possibilities today that they couldn’t even conceive of yesterday. Up until they had that leap they thought they’d exhausted ALL their options. And then suddenly something connects in their brain and they’re like “OH! Well I know she says not to pull the dog’s tail…but…what happens if I do it anyway?”

I know it often feels like it is- and when we’re talking school aged it may well be sometimes, although not really if you subscribe to the “kids do well if they can” mindset. But toddlers and preschoolers are NOT pre-meditating your downfall. They’re not doing this to piss you off, they’re not doing this to ruin your day or make you feel like a failure. They’re doing it because they have an idea and they need to know if it holds true in real life. Or where the edges ACTUALLY ARE- I often use the metaphor of it being like being in a pool. When your toddler boundary pushes like this- imagine them pushing against the sides of a swimming pool to make sure that yup- that’s holding up. I can rely on that. I might even be able to stand on that and jump back in. If they never test us- in big or small ways- how are they supposed to know if yup, that’s holding up. I can stake my life on that.

It’s the beginning of the more fine-tuned social referencing we do as we hit older childhood, teenagehood, and ultimately adulthood. If you’re discussing a topic with a friend and they start to shift in their chair, avoid your eye contact, their tone of voice changes- what does that mean? PROBABLY that they’re uncomfortable with the conversation. So if you’re not an asshole, you’re either going to change the subject or you’re going to change how you approach the subject. You’re adjusting based on the social cues that your social partner is giving you.

Same thing with toddlers! Only they’re learning the social cues from the starting blocks here, so cut them a bit of slack. At this point, I can look at my 4-year-old, widen my eyes, purse my lips and SLIGHTLY shake my head and he knows that’s the signal for “Mama don’t play that.” But my almost 2-year-old DOES NOT get that message when I give him the same look. Sometimes it seems like he does- but it’s usually because my older son has adjusted his behavior accordingly and he’s mimicking his brother. He’s not referencing ME in that situation, he’s referencing his big brother. HE ISN’T GETTING THE CUE FROM ME YET! He may reference me, maybe even several times, but it doesn’t matter how many languages I say “Don’t do that” in- English, French, Sorani, ASL… that’s about my linguistic limit… or how crazy I make my eyes- he hasn’t had enough opportunities of me following through on that yet to really internalize it’s meaning. My older son knows “Damn, that look means a logical consequence is coming down the pipe so why don’t I just adjust by myself?” My toddler hasn’t had as much experience so he’s still willing to give it a try. My older one knows that there’s no escaping it so he’d best just think critically about what he’s doing without adult intervention. My toddler is still like “BUT WHAT IF IT DO IT ANYWAYS!?” But he’s not doing it just to piss me off. He’s doing it for science.

So while I get it, it’s frustrating. I’ve been known to say “You little shit” under my breath when my kids do this… I may be a Parenting Coach but that doesn’t mean my kids don’t boundary push as much as the next one, and it certainly doesn’t make me frustration proof. It’s not misbehavior. At least, it’s not purposeful, premeditated misbehavior. So TRY- and I know this is hard, the struggle is real and I’m RIGHT there with you. But TRY and take a deep breath and respond calmly and CONSISTENTLY. The more you waffle, the more different tactics you attempt, the WORSE the boundary-pushing is going to be. Consistency is the KEY here. I SUGGEST you use natural and logical consequences…but whatever you do- STICK TO IT LIKE GLUE. Commit! Really commit.

If you find you’re having a hard time getting started with Natural and Logical Consequences- grab my Scripts for Managing Crazy-Making Behaviour if you haven’t already. There are 10 scripts for what the Posse told me were the 10 behaviors that drive them the most BATSHIT crazy. And there is a specific one in there for ignoring. You can grab them by clicking the link in the description or by going to prnt.link/scripts – they’re 100% free, so what have you got to lose?!

OKay. So does referencing make a bit more sense now? Are you feeling like you’ve got a bit more of a handle on it? This is a really big topic and I could honestly go on for HOURS but I feel like you’ve got the brief version with the important headlines now so that you can hopefully be less triggered by this behavior.