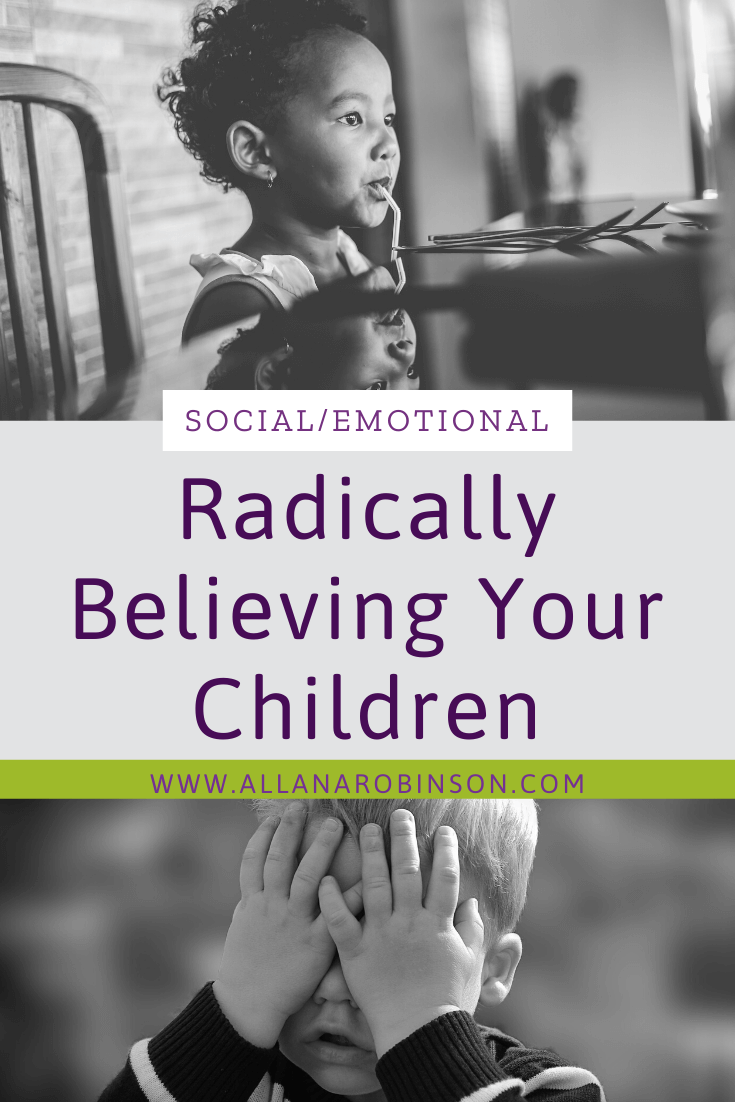 Over the last few weeks I’ve had a few conversations where parents have said some variation of “He/she can do XYZ under ABC circumstances, but when I tell them to do it they say they can’t, they avoid it, they cry, etc.” This belief that your child is lying to you, that they’re choosing not to do something.

It’s destroying your chances at EVER building internal motivation!

It’s ruining your relationship with your child!

Unfollow me, unsubscribe from my newsletter, leave the Parenting Posse.

This is THAT important.

If you’re going to be here, with me, you need to get on board with Kids Do Well If They Can. If they aren’t doing well, it’s because something is preventing them. OUR job as parents is to figure out what that something is – WITH THEIR HELP! Then to help them solve that problem, to build that skill, to remove that barrier.

I NEED you to make the choice to believe your children. Radically.

Now, where most parents get stuck on this whole radical belief thing is physical ability. I’m repeating myself- I know- everyone can’t seem to get past this.

It doesn’t matter if your child CAN PHYSICALLY DO THE THING OR NOT.

There are lots of times- even as adults, that we can’t do things that would are physically able to accomplish.

I actually had this happen to me, as an adult, just the other day. It’s the time of the year where events are booking speakers for the new year. Almost every day I have a new speaker request in my inbox. I had one come in, and while everything about it looked good. Right audience, they were willing to pay my speaking fee and my travel fees…they had a very specific date they wanted me to speak on that I couldn’t make work.

While I enjoy speaking, I find it EXTREMELY draining, therefore I only agree to speak a certain number of times a month. After that I consider myself booked, because I know I won’t have the energy to do more than that. The date they wanted (while technically free) put me over that threshold. I replied that I was fully booked.

They replied, asking if I wasn’t available, who was I speaking for that day? I was floored. It instantly put me on the defensive.

Not only is it incredibly unprofessional, but that’s really none of their business if I’m booked with another speaking opportunity or I’ve got something else (personal or professional) that that day is earmarked for.

INSTANT hyperarousal! As an adult, I was able to shut the laptop, let myself calm down, and reply calmly later. We don’t do this to adults. If someone tells you they’re unavailable or tired or otherwise not going to comply with your request- we believe them!

As a child, they tell you they don’t have the resources to do something and you say “WHY NOT? I know you can do it, you do it at school, or you did it for Nana, or you do it for Dad all the time, why can’t you do it now?!”

JUST BECAUSE YOUR CHLID CAN DO IT SOMETIMES DOES NOT MEAN THEY CAN ALWAYS DO IT.

Our job as parents is to figure out why and why now?

That’s a valid question but if you’re expecting your preschooler to be able to articulate it succinctly, that’s not likely.

It astounds me how often parents actually know exactly what the “why” is- but they dismiss it! We’ll be talking about something that happened in the evening and I’ll suggest that maybe the demand was too high for that time of day and so often they’ll say “Well, yeah, I mean, I know she was tired. We’d just been at a huge family gathering, and she ate a tonne of sugar, and she spent a lot of time running around with her cousins, so she was zonked.”

A young child, we’re talking kids between 2 and 6 years old, should be able to just power through their exhaustion and be able to complete a task with the exact same proficiency as they would at 7 am on a Saturday after a good rest!

Maslow’s hierarchy of needs: rest is the most base need out there.

Same with sickness. If your child is sick, that is a valid reason for not being able to do something. That’s not something to dismiss as unimportant!

Same goes for you can do this at school but not at home. We just talked about this last week.

One, usually kids are exhausted after a day at school. Two, usually they prioritize their energy to public spaces where failure could cause danger so they’re out of juice when they get home. They’re still giving all their energy to something else and haven’t shifted it to this new thing or with this person.

I’ll use Nana, as an example because my mom is my boys’ safe space. With Nana you can do this because Nana makes you feel incredibly safe, she’s very calming, she’s really supported your zone of proximal development. You can’t generalize that to me yet.

Figure out the why and why now.

Then work on solving THAT problem!

If your child is saying “I’m too scared”…okay, well why? What are you scared of specifically? Don’t get me wrong- this can take some digging because young kids aren’t known for being particularly articulate. Have them point. Ask them where they feel scared, that can usually give you a good clue.

My son will say he feels scared and point to his head when I ask where. Okay, so he knows that he’s thinking about something scary. He knows it’s in his head. And usually, in my experience, it’s actually that they’re scared of US.

They think we’re going to get mad. Often, they’re too tired or don’t know how to do something. They know that annoys adults.

If they’re saying they’re too tired, well then can this wait until you’ve had a nap? Or can I help you with that?

This is where that zone of proximal development comes into play again. If you haven’t consumed the episode on Vygotsky, that guy knew his stuff.

The zone of proximal development is the difference between what a child can do totally independently and what they can do with just a bit of help. Give them the minimum amount of help needed to get them through it.

This is my challenge for you: I challenge you to believe your child. Radically.

I’m just challenging you, to believe them.

Just don’t automatically assume that your child is lying to you.

Now, you’re probably going to need some support in that because as simple as it sounds, it is NOT! It is VERY hard…so if you haven’t already, I encourage you to come join the Parenting Posse Facebook group and let us support you in this.

So what do you think? Can you do it? What problems do you anticipate having if you accept this challenge? 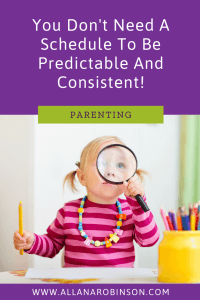 You Don’t Need A Schedule To Be Predictable And Consistent! 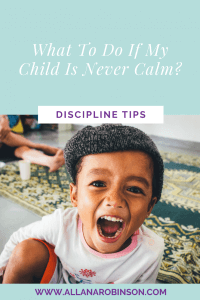 What To Do If My Child Is Never Calm? 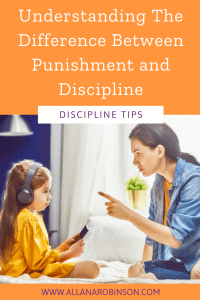 You Don’t Need A Schedule To Be Predictable And Consistent!

What To Do If My Child Is Never Calm?