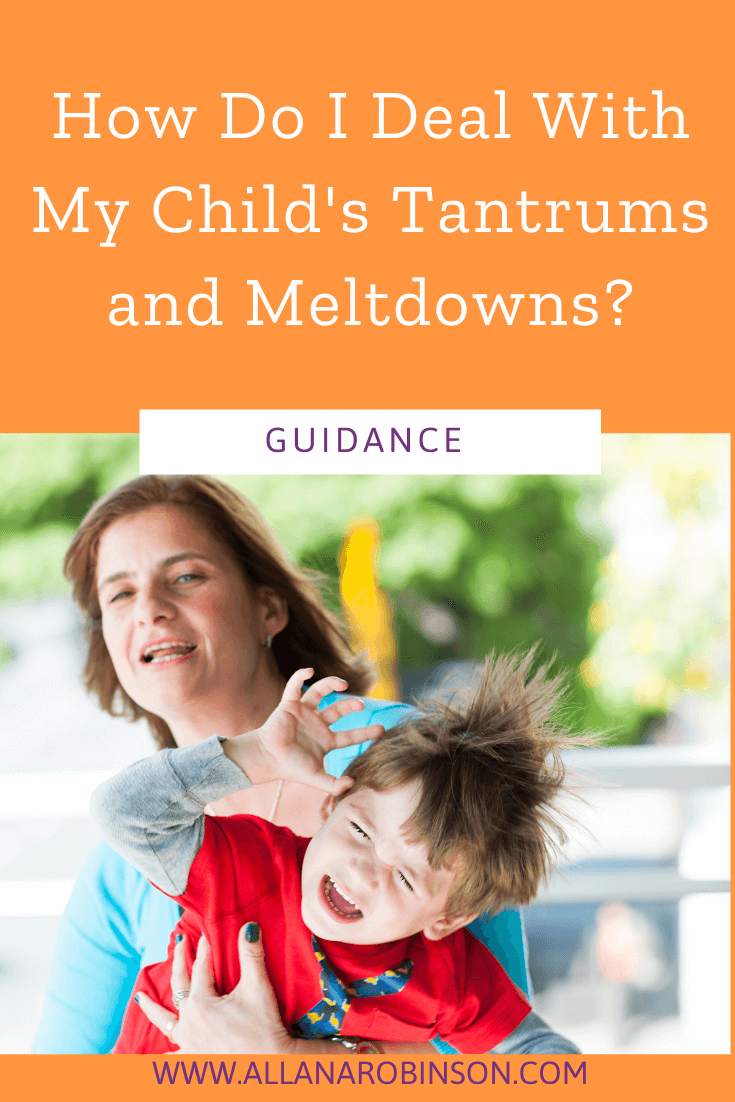 How Do I Deal With My Child’s Tantrums and Meltdowns?

What is the difference between a tantrum and a meltdown? If you follow me on Instagram, you would have noticed that I’ve been participating in a collaboration with a variety of parenting professionals called the Meltdown Movement. This collab was created by my colleague and friend Laura Petix, also known as the OTButterfly, because she’s been noticing some inaccurate information about Tantrums and Meltdowns circulating from some parenting accounts. Us, knowing there is a BIG difference between the two, are collaborating to set the record straight.

What is a tantrum?

A tantrum happens in our neocortex. That top level of our brain that is conscious, has logic and reason, our language lives in our neocortex, as well as our executive functioning skills. In other words, we need our neocortex to be civil human beings. A tantrum is conscious and purposeful. Children have a tantrum to meet an end – they don’t like their dinner, or they want candy, or they don’t like the music you’re playing, or they want the toy the other kid has. A child can have a tantrum for any reason BUT they have a specific goal. Generally, if you give your child whatever it is they’re demanding- they will instantly stop. They go “Thank you!!!” and they peace out because they got what they want.

Tantrums are a hail-mary attempt to meet an end. Usually we’ll see them during an extinction burst. Extinction bursts are the coles notes is that it’s how our brain attempts to maintain the status quo. If you want to learn more about extinction bursts, we have a whole article on our blog.

Change takes energy, and our brain’s prime directive is to conserve energy so that if we’re ever in danger we have the resources to protect ourselves. So, our brain will fight really hard to maintain the status quo. Consistency and predictability make humans feel safe. So when something changes, or our expectations aren’t met – we will try REALLY HARD to achieve what we were expecting. It doesn’t necessarily mean we LIKE what we were expecting!

I’ve had kids throw tantrums over situations that were objectively changing in their favour. There’s the REAL way you tell it’s a tantrum: once the child has calmed down, and you ask them why they got so upset – they’ll tell you. They’ll be able to say, “I wanted the candy.” or “I wanted to listen to Baby Shark.” or “I wanted the truck Hakim had.” or even things like, “I thought the dinosaur was going to come out of rock and eat me.” or “I wanted Barbie to sing a song to me.” – it doesn’t matter how CREDIBLE the reason is! It doesn’t matter how ridiculous, made up, or fantastical the reason is. If they can give you ANY REASON whatsoever, they had a reason prepared and it was a tantrum. It was conscious and purposeful.

A meltdown can happen at any age. When our amygdala senses danger and if we can’t mitigate whatever that perceived attack is – if we can’t calm our parasympathetic nervous system – we then go even deeper into our brain, and we go into our brain stem (reptilian brain) and we go into fight, flight, freeze, fawn, or fib. At this point, we are fighting for our life. Our brain has determined we’re in life-threatening danger. Often with young kids it’s sensory input – there’s too much input, or too little.

This can also often have to do with what I call the “Big 3”: food, elimination, and sleep. Those 3 basic needs, either too much or not enough of them. We cannot control what our brain perceives as danger in the moment. We can desensitize our nervous system to certain things but it takes a lot of time and intention. At the moment, there’s no reasoning with the child. Because meltdowns aren’t reasonable, because the limbic system has no reason!

Talking to your child will almost always escalate a meltdown, as they don’t have access to their neocortex where language is stored. If, once your child is calm, at a neutral moment, you ask them why they were so upset, they won’t have an answer for you. They’ll avoid the question, say “I don’t know”, or get upset again. They can’t answer you, because they had no control over it. Their autonomic nervous system took over. Autonomic meaning it’s automatic: it does what it does and we have no ability to change it.

Why is it important to be able to tell the difference, even if they look the same to the naked eye?

If you discipline a meltdown as a tantrum, you’re going to make it worse. And if every time your child melts down you keep doing things that escalate them, you become the danger they need to protect themselves from. You can’t help your child when they are avoiding you because you overwhelm them. They won’t trust you, and they might not even know why they don’t trust you, it’s just a vague feeling of “this person isn’t going to help me.”

Children behave well when they feel safe. If we aren’t a safe haven for them, they’re going to go seeking out other people who will be. We want our children to run toward us when they’re upset, not away from us.

Similarly, if you treat a tantrum like a meltdown your child is quickly going to learn that they can pitch a wee fit over anything and immediately all demands are removed. You then teach them they can manipulate you.

We need to make sure we can discriminate between these two completely separate behavioural events even though they look the same on the surface, otherwise we’re going to create secondary behaviour issues, and the original issue is going to get much worse.

How do we address a tantrum and a meltdown differently?

For a tantrum, hold the boundary you set. Wait for the extinction burst to pass, and then you reason with them when they’re calm.

With a meltdown, you try to remove the stressor if you can, make them feel safe, comfort them when they begin to calm down, and when they’re completely calm, build the skills to cope with whatever the stressor was so that it doesn’t happen again. This is something we help you learn to do in ParentAbility.

We help you recognize when your child is tantruming or melting down and create a plan and strategies that are customized to your child and your family to reduce and eventually eliminate those big behavioural events.

We’ll be opening ParentAbility for registration soon so make sure you put your name on the waitlist for that!

I hope that was helpful and gives you an idea of how to change your response the next time your child is having a tantrum or melting down so that you can deal with it efficiently and effectively.

A special thank you to Laura for bringing all of us together to educate as many parents as we can on this topic!