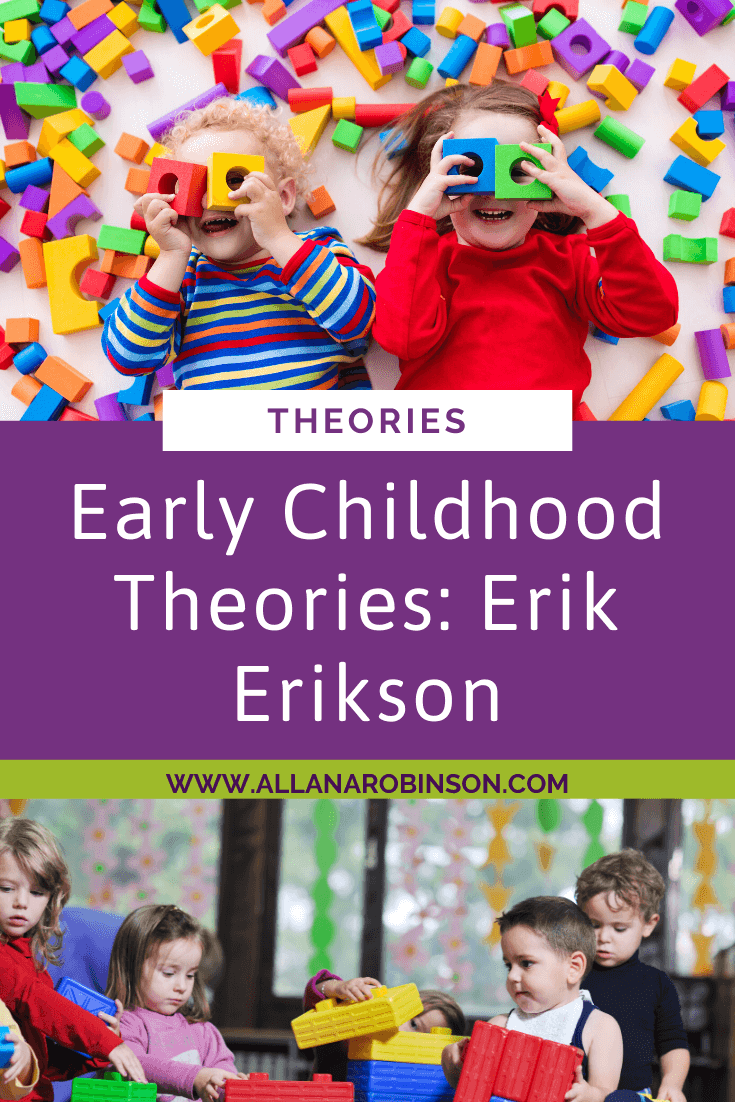 Want to watch the video version of this post? You can watch Part 1 & Part 2 here.

This series has been kind of our little “mini” degree in early childhood education for y’all. I’ve been giving you the Coles notes on each theorist so that you can start to understand how all of this stuff fits together and manifests in YOUR KIDS. We’ve already done Montessori, Piaget, Vygotsky, and Dewey.

So the biographical stuff first. Erik was born in Frankfurt Germany in 1902 and he knew Anna Freud (the daughter of Sigmund). She convinced him to study at the Vienna Psychoanalytic Institute where he specialised in child psychoanalysis. He immigrated to the States in 1933 and taught both at Harvard and Yale. His first book was published in 1950. It’s called Childhood and Society. And he passed at the age of 92 in 1994. 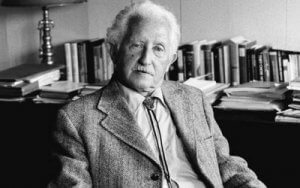 Erikson’s work is focused on how children develop the foundations of mental health. This theory is called the Eight Ages of Man and it’s focused on psychosocial development. So these Eight Ages, as he called them, cover birth to death, and each stage has a goal, a strength to be developed that is built upon in the next stage. Erikson believed that if you accomplished that goal if you developed that strength successfully while in that stage, then you were well set up for the next stage. If you didn’t, then you would continue to struggle with it as you got older. He did believe that you could go back and “fix” your shortcomings in previous stages but that it would take conscious effort and desire to do that. Very much “You can teach an old dog new tricks, it’s just a lot harder.” We talked about that the other week when we were talking about executive functions, and the same goes here. You CAN teach an old dog new tricks, it’s just going to take way more effort. So if you can you might as well do it while the brain is most pliable. And that’s really what each of these stages are, they’re windows of opportunity where the brain is most open and ready for that kind of learning. So it’s when you’re most primed to develop those strengths.

So what are these stages? I’m going to tell you all 8 but since I focus on infants, toddlers, and pre-schoolers we’re just going to go over the implications of the first 3.

So the first stage we’re going to talk about is Trust vs. Mistrust; which is the first year of life. So the goal of this stage is to develop hope, to trust in themselves, and to develop trust in the people and the world around them.

Erikson believed there were two parts to trust: EXTERNAL- the belief that significant adults will be there to meet your needs, and INTERNAL, which is the belief that you have the power to effect change and cope with things that happen to you and around you.

In this stage, babies develop an attachment to their primary and secondary caregivers. When children are securely attached they have a sense of security, of being safe, when their primary and secondary caregivers are around- typically Mom and Dad. Erikson really felt that each state set the foundation for the next stage- so a baby whose got a healthy attachment to their parents is able to move confidently into the next stage to explore their independence. And you can usually see this in babies around the age of 9months to 13 months. They’ll cling to you, and then they’ll go out and explore a bit and look at things and then come back and sit in your lap and watch for a while and then go out and explore again. I call that the satellite stage. They go out and they come back to the Mothership over and over again. That’s a sign of a secure attachment.

There are two things Erikson believed parents could do to help get their children successfully through this stage: the first is to hold them during feedings, and the second is responding when they’re in distress.

But it’s a lot harder than you might think! In our society where we’ve got to be in all places and do all the things and we’re SO touched out…it’s so easy to check out of those feedings. To put them in the bounder or keep them in the car seat and pop the bottle in their mouth. Or if you’re nursing to check out and absorb yourself in your phone during feedings. Erikson really believed that being present and engaged during feedings is extremely important for that development of hope. Of attachment.

The second is responding when they’re in distress. Again- sounds pretty easy, but we’re often so worried about “spoiling” a baby. And Erikson didn’t believe you could spoil a baby. He believed that by responding quickly and appropriately to babies we build that attachment, we build that external trust.

Now with both of these things he advocated for balance. There are people who have taken this idea and run with it and taken it way too far. “Attachment Parenting” would fall into that category. Erikson didn’t mean never allow your baby to experience distress. Erikson didn’t mean that if you check your emails while feeding your child that you’re a monster and your child will never attach to you. Not at all. BALANCE. Especially in the distress department, as babies get older they’re better able to cope with delayed gratification of their distress signals. That’s why if you follow Alexis Dubief for example, it’s not advocated to start sleep training a child before 6 months typically. This is because at 6 months they have their own coping mechanisms vs. at 3 months where they’re 100% reliant on you to provide the soothing. Balance is the name of the game.

And it’s not about quantity, but quality. The quality of the parent-child relationship is king. And that it’s important that they have this relationship not only with Mom and Dad but with other significant adults too. That could be a babysitter who cares for them consistently, a consistent caregiver at daycare if you’re in the States, a Grandmother or Aunt or Uncle. My kids both significantly attached to my Mom. The more adults your child has a significant and healthy attachment to, the more secure they’ll feel in a wider variety of situations.

Autonomy vs. Shame and Doubt.

The second stage is from 1-3 years old. The strength that should be developed in this stage is independence without suffering from extremes of shame and doubt.

Erikson felt that the big struggle of this stage is learning when to hold on and when to let go, in all things. It’s good to hold on when you’re persevering something for instance, but it can also be destructive by making you uncooperative and stubborn. Letting go is good when you’re exploring your environment and doing new things. It can also be not so great when you have LOSS of control and tantrums. So Erikson really felt that toddlers have a hard time striking that balance and finding that sweet spot between the two.

He felt there were 4 things parents could do to help them find that:

Are you starting to see where Erikson has influenced me? These are basically the tennents I preach all the time, aren’t they? These are pretty much the frameworks of the logical consequence process I teach on my blog and in my scripts, which are at the end of the post. I’m always talking about giving clear, reasonable limits, and clear, AVAILABLE choices. And that’s REALLY important. Don’t go trapping them by giving them a “right” and a “wrong” choice. If there’s a wrong choice YOU’RE doing it wrong. When we give children choices we have to be 100% okay with them choosing either choice.

Accepting their swings, though it’s not something I harp on is definitely something I think isn’t talked about enough. If you scan any Mommy group on Facebook you’ll see at least one post within 2 minutes of scrolling about children preferring one parent over the other, or how they’re clingy in one situation but not another. That’s just how they are at that age as they explore and transition from that satellite stage to full independence.

You’ll notice this stage is called Autonomy vs. Shame and Doubt. This is so important and also addressed in the scripts but from Erikson’s point of view: When we shame children when we cause them to doubt their abilities- they feel a loss of control and that’s what causes the tantrums, the fits, and the rigidity we so often see in toddlers. Giving them that control, that trust via the logical consequence process really sets them up to move on to the next stage successfully because we’re leading them down that pathway towards confidence and competence.

The third stage is from age 3 to 6 and the strength they’re supposed to gain at this stage is a sense of purpose.

Kids in this stage are more attentive and actively focused. They’ve got a larger amount of willingness to listen and learn from others be that peers, teachers, or parents. Children who have successfully navigated the second stage are coming into this stage fully autonomous so they’re behaving less to gain individual control and more towards an end goal. They want to get things done.

This stage really overlaps with Montessori. This stage is where you have to be really careful that you aren’t doing things for them that they can competently do for themselves. We want to encourage preschool-aged children to use their energy productively and actively so that their confidence improves. When we do things for children that they can actually do for themselves and when we focus on the mistakes they make their sense of initiative dies and turns into guilt and discouragement. I don’t know about you but I do nothing well when I’m guilty and discouraged. 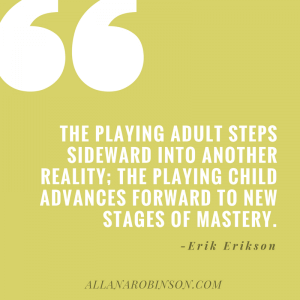 To recap, Erikson had 4 things we can do to help them move successfully through this stage:

Okay- any questions? Pop them in the comment section below!

As you can tell by his dates he was right in there with Piaget and Montessori and Vygoysky, although Vygotsky was somewhat hidden behind the iron curtain at the time so he likely didn’t come to know of his works until quite a bit later. But you can see how they all feed off of each other. How they’re kind of building this understanding of children from multiple perspectives and while they aren’t always in agreement they rarely blatantly contradict each other.