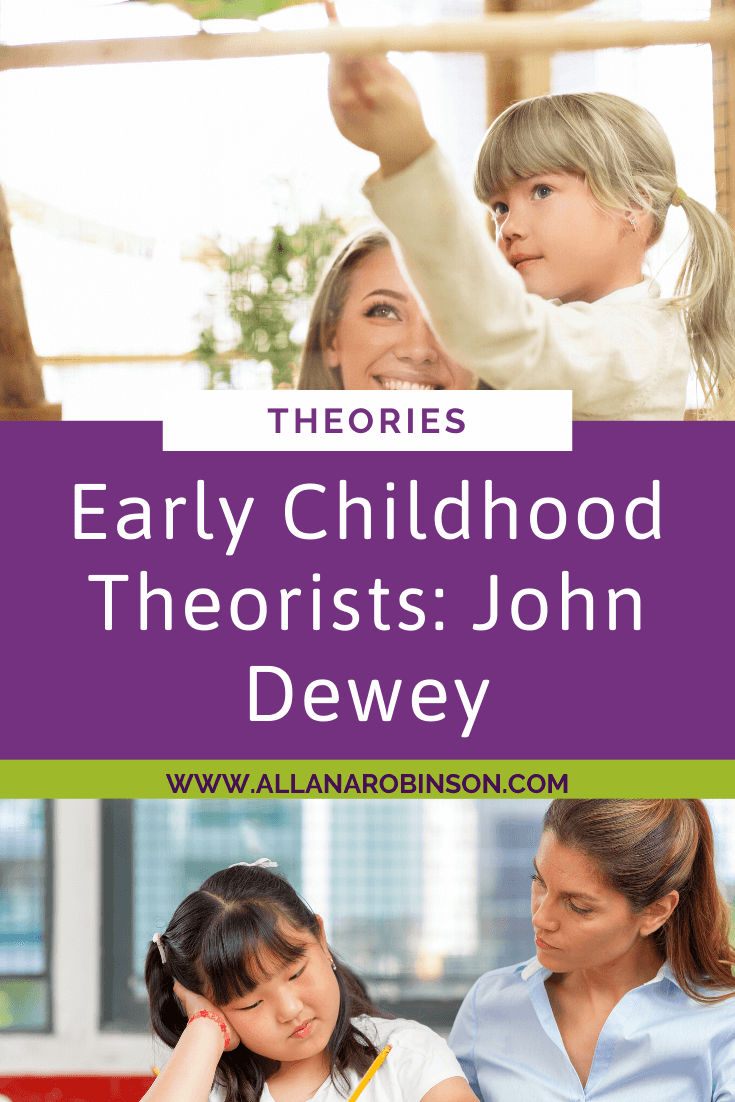 Want to watch the video version of this post? You can do that over on my Parenting Posse Facebook Page.

Today is all about John Dewey. If you’re pretty much every parent who has no previous knowledge of child development than this name rings zero bells. He is not like Montessori who we know about from hearing it in social settings. He was a contemporary of Montessori and Piaget and Vygotsky though. Unlike those three who we’ve already covered, he wasn’t so concerned about child development. He was more concerned with Education. So his work wasn’t aimed at parents at all. It was aimed at teachers, but as parents, we can still take a lot away from it.

So, in case you didn’t notice those dates are a LONG TIME AGO. The parents of the students he had in his Laboratory School at the time remembered when children were educated at home watching their parents do meaningful work. Most of them were educated that way. They were critical of the traditional formal teaching format where children were learning information by rote, and out of context. In preparing for this session- it really hit me how we’ve come so far and yet we’re still dealing with the exact same issues as we were 100+ years ago. Dewey is still very relevant today because while we’re learned all this stuff about how children learn and think and develop, very little of it has been put into practice. Education has basically remained unchanged.

Dewey agreed with Montessori and Piaget that children learn by doing and that a teacher’s role is to encourage experimentation and independent thought. Conversely, unlike Piaget and Montessori who, as we’ve already discussed believed that the environment was the main teacher, Dewey sided more with Vygotsky in that he believed that children learn best when they’re interacting with a More Knowledgeable Other, with other people. This is why I wanted to do Dewey before we move on to anyone else. He really was kind of middle of the pack. He was all about giving children the child-sized tools and enabling them to do it themselves but he felt that part of that was the teacher whose job it is to use their superior knowledge to help children make sense of the world. He thought that information coming from an experienced other was more useful to children than something they stumble upon by themselves.

Dewey was a proponent of emergent curriculum. He wanted teachers to plan their curriculum by observing the interests of the children in the room, and then creating educational experiences to extend their interests. So if the children are really interested in dogs for instance- they’re playing dog, they’re talking about their dogs a lot, they want to read books about dogs- it’s a pervasive interest in the room, then it’s the teacher’s job to create experience, plan field trips, and include materials in the classroom that support that inquiry and extend it. He wanted teachers not necessarily to lecture children but to ask them questions and put extensions in their way to help them find what we already know. So if a child drew a picture of a cow without udders we could look at pictures of cows in different contexts, read books about cows and what they do, take them to a farm and show them a REAL cow and have them watch a milking demonstration. So, you’d expose them to what they got wrong in a bunch of different contexts to help call attention to what they overlooked. That’s what he meant by using our superior knowledge to help them make sense of the world.

Dewey had some criteria for what makes something an educational experience. And this I think is really applicable to parents because I so often hear “Oh well, that show is educational” or “This outing is really educational.” even when it’s really just pure entertainment. And it’s OKAY to be entertained but I find this set of criteria really helped me as an early interventionist and now as a Mother to kind of weed out what is genuinely educational and what’s just for fun:

For Dewey, it’s not enough for something to be fun and to be interesting. It’s got to have a purpose, it’s got to stretch you mentally, and it has to leave you wanting more.

At MacEwan University where I did my second degree, they had a Child Care Lab School so we had access to actual children. And they did this really neat project that really falls in line with Dewey’s criteria and whole philosophy. As is with all institutions these days they were trying to provide healthier food so they switched out their flavoured yogurt on their menu for plain yogurt. And the kids hated it. They wanted their old yogurt back. So the ECEs were explaining about sugar and how too much of it is unhealthy and the children wanted to find a way to make the healthy yogurt still healthy but not bad for them. So they had a registered dietician and a holistic nutritionist come in and talk to the kids and give them ideas. They visually compared how much sugar were in different fruits and sweeteners. They went to the grocery store and bought every brand of plain yogurt they could land their hands on. They learned about how yogurt was made and they made some in the classroom. They taste tested a tonne of combinations of yogurt brands and different fruit additives. And then they voted on it and the whole centre- not just the preschool class who’d started this but the whole centre came to a decision on what kind of fruit would be added to the plain yogurt and what brand of yogurt the cooks would buy.

And when it was done they wanted to learn more about the rest of their menu and it kicked off a WHOLE healthy eating food pyramid type thing. It was insanely advanced work for pre-schoolers but they had ECEs who were keenly observing them, asking them the right questions, and then putting those extensions in their way so they could find the answer. That is exactly what Dewey felt was true education.

So as you can see Dewey wasn’t really concerned with parents, he was concerned with teachers but I still think we can take a lot away from him: namely making sure we observe our children and plan activities that extend their interests and follow those 5 criteria so that we’re providing them with truly educational experiences. Not everything can be educational- but it’s important to be aware of what is actually educational vs. just telling ourselves something is educational because it makes us feel better about them watching TV while we zone out on our phones for a few minutes. We’re parents- we’re NOT teachers- everything we do with our kids doesn’t have to be 100% educational. The other thing I think we can take from him is that idea of extension- putting things in our kids way to help them figure things out, asking the right questions to guide their learning. In a behavioural context- that’s why my Logical Consequence Process has so many open-ended questions in it. Because when we ask the right question- we provoke critical thought.

I hope some of this theorist stuff is starting to come together for all of you. Let me know in the comments if you’ve got any glaring questions about how all these theorists melt together in real life because I know there’s a lot of seemingly opposing views on the same topic and that can cause a lot of mental friction for us.