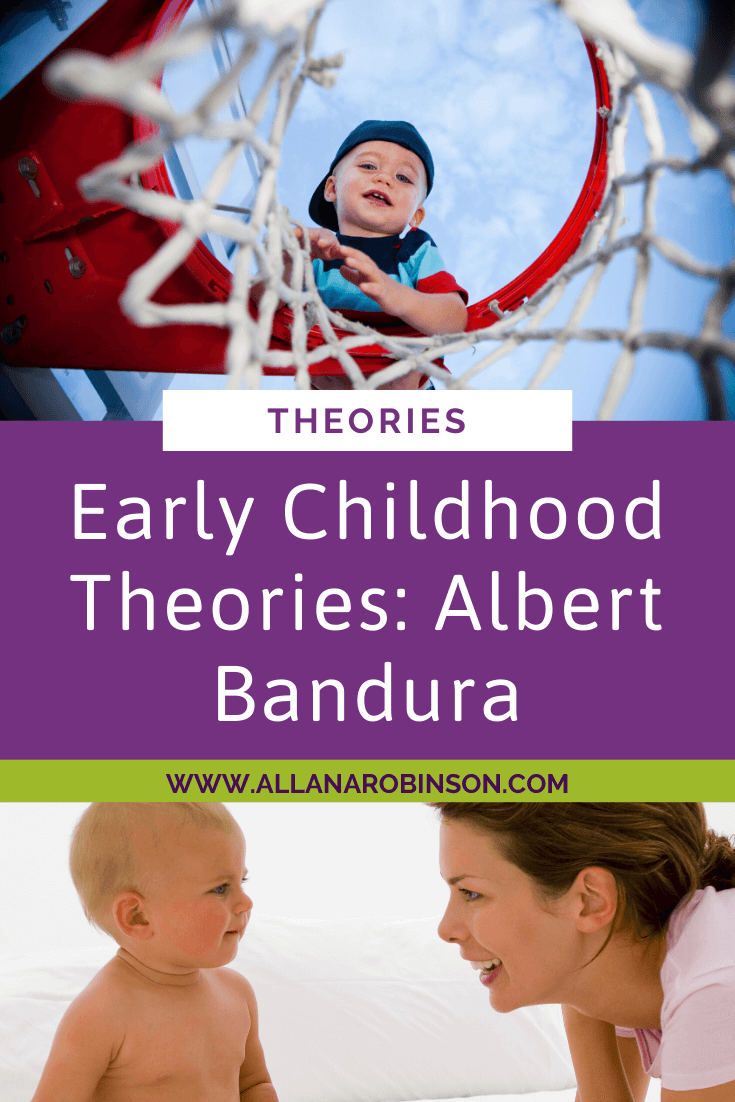 Today we’re going to chat about Albert Bandura! Albert Bandura hails from Mundare Alberta. He was born in 1925…which is a little town I’m actually very familiar with. In 1949 he moved to the United States. He is an alumnus of the University of British Columbia, then the University of Iowa for his Masters and PHD, and in 1953 he began teaching at Stanford University. He is the first of our theorists who is still with us- he’s currently 92 years old.

So Albert Bandura’s theory is called Social Cognitive Theory. The encompassing idea behind it is that children learn by observing the people around them, by being modeled to, and by imitating that modeling. Monkey see monkey do.

Bandura believes there are three factors that play into how a child shapes their behaviour: influence, reward, and self-efficacy. I like to think of these three things like when you’re learning about colours. You have those coloured but semi-transparent pieces of plastic that you can put on top of each other. So if you put down blue; it’s blue until you put yellow on top and now it’s not blue or yellow- now it’s green. That’s kind of how I think of influence, reward, and self-efficacy. They’re separate, but when layered on top of each other, they alter what’s underneath.

The first layer is influence. Influence means that children are more likely to imitate people they know, admire, and view as accomplished. A baby will mimic their Mom because she’s basically the centre of their universe but they won’t imitate a stranger, because who the hell are you? Whereas a pre-schooler will also expand their influence to other important people in their lives: Dad, teachers, older siblings, and friends, etc. As children grow, their circle of influence widens, and who they deem worthy of imitation widens. This is why you’ll so often hear parents of children just entering preschool or kindergarten complaining about how their child “picked this or that” up from a kid at school. You’re not the only informant of their behaviour anymore.

Reward is the second layer that determines what they will imitate. If a toddler sees their older sibling saying please and thank you and getting rewarded for it (either with a tangible or socially) they’re more likely to adopt that behaviour themselves. If they see their sibling having a tantrum and not getting a reward, they’re less likely to try that on for size. I know from personal experience in my real life right now. I have an 18 month old and a 4 year old. My 18 month old thinks my four year old IS THE SHIT. He idolizes him. So he’s totally got the influence thing down. So when my four year old does ANYTHING- you can bet your ass my baby is right behind him DOING THE SAME THING. If the big one eats something, the little one eats it. If the big one throws something, I’m blocking in the direction of the baby cause I know where the next projectile is coming from. Monkey see monkey do. AS LONG- as that person is someone of influence.

The final layer is self-efficacy. This means how a child views themselves and their own abilities to successfully adopt a behaviour. For instance, a child who views themselves as athletically gifted is likely to imitate what they see Sydney Crosby do on TV. A child who doesn’t see themselves as athletically gifted, won’t. A child who sees themselves as more artistically inclined is more likely to ignore Sydney Crosby and imitate a singer or dancer…I remember back when I started doing early intervention Miley Cyrus was Hannah Montanna and every little girl between the ages of about 4 and 9 that I worked with was OBSESSED with her and imitated everything she did.

And this is why it’s so important for girls to have strong role models like Wonder Woman and for boys to have gentler more caring and compassionate role models, and I honestly couldn’t think of one while I was writing my notes so if you can think of a character that displays what would typically be “girly” traits that appeals to young boys please leave a comment below!

I think we’re doing an excellent job of this for little girls and there’s some awesome books like Goodnight Stories for Rebel Girls and the website a Mighty Girl has tonnes of resources. I don’t feel that we’re doing so well with this for little boys. As a Mom of two little boys I can definitely see room for there to be more examples of caring and compassion when it comes to media aimed at males.

We want all of them to see examples of competence that they can imitate.

All this comes together to help a child actively interpret their experiences. This in contrast to theorists like Skinner who we’ll talk about another night, who see children as “operantly conditioned”. In other words, guided only by reward and punishment. Bandura sees these layers as the lens children use to interpret their truth. So they’ve got the first layer, the second layer, and the third layer. Again, think of those like coloured plastic. Blue, yellow and red. So things are going to look and be experienced very differently depending on what your layers are made up of, even within families. My oldest son who has primarily adults in his circle of influence with a few select peers thrown in, who is very used to logical consequences (or in rewards), and who sees himself as very strong and powerful and smart, is going to have a VERY different experience of the EXACT SAME EVENTS as a child who has primarily peers in their circle of influence, who experiences arbitrary rewards, and who sees themselves as weak. This is how the cycle of poverty perpetuates itself. This is how we end up with intergenerational trauma.

So why is this important to know?

Because, if we accept Bandura’s theory, it helps us understand who and what our child sees as important and what they believe about themselves. This can often be the key to figuring out what’s informing our child’s behaviour.

It’s also why one of our big goals for our children should always be competency. When we work to build competency in our children; real genuine ability, we not only feel better about the fact that they can handle responsibilities and act appropriately, but they do too. When they view themselves with self-efficacy, children take more appropriate risks and extend themselves in more positive ways in every aspect of life. They know they can do it. That changes their lens!

This is once again why I feel so strongly about Natural and Logical Consequences. It’s because of that reward layer. If we default to operant conditioning-so rewards and punishments, then our children have a lens that tells them that external forces are in control of their behaviour. I do this and I’ll get that. Which implodes when there’s nobody around to hand out rewards or punishments. When we use Natural and Logical Consequences and we teach our kids to think critically, we turn it to internal forces. I do this because it benefits me. It makes me feel good. It’s got nothing to do with anyone else. I can think this through and make the decision and that’s enough. We completely alter that reward lens. And that reward lens has such a huge impact on what our children learn from their influencers. It has such a massive impact on that self-efficacy lens. It’s, in my opinion, the most important of the lenses. It’s the peanut butter in the sandwich that holds everything together.

So that’s Bandura! I hope by now that you can see where everything I teach is coming from. I’m not just pulling this stuff out of my you-know-where. These theorists inform everything I teach. And that’s why, if you’ve ever read my website, I mention a few times that I don’t adhere to any “parenting styles”. Several people have told me to come up with a “name” for what I teach like “Positive Parenting” or “Conscious Discipline” or “Love and Logic” or “RIE” or any number more. And I understand why because trademarks are awesome but I really struggle with it because I’m pulling from everyone. I’m putting together this puzzle. I don’t think any of these theorists is wrong. We’ve already covered quite a few but none of them are wrong. They’re all just discussing different aspects, and I’m trying my hardest to pull them all together so you can get a more complete picture of your child’s development. Because, as I’ve said, you can’t change what you don’t understand.

One of the ways I’ve tried to do that are my Scripts for Managing the Top 10 Crazy-Making Behaviours. They’re that first jumping off point where I introduce you to Natural and Logical Consequences in a BITE SIZED form, in a VERY manageable way, so that you can see the actual effect it has when we change that reward lens. I get love notes from parents on a daily basis- some of which I’ve featured on the download page telling me that they’re amazed by the effect they’ve had on their parenting. They’re not going to parent for you, you have to listen to them and put in the work to use them, but if you do you’re going to get JUST A TASTE of parenting smarter instead of harder can make. So if you’d like to grab those- the link to get your paws on those are below.