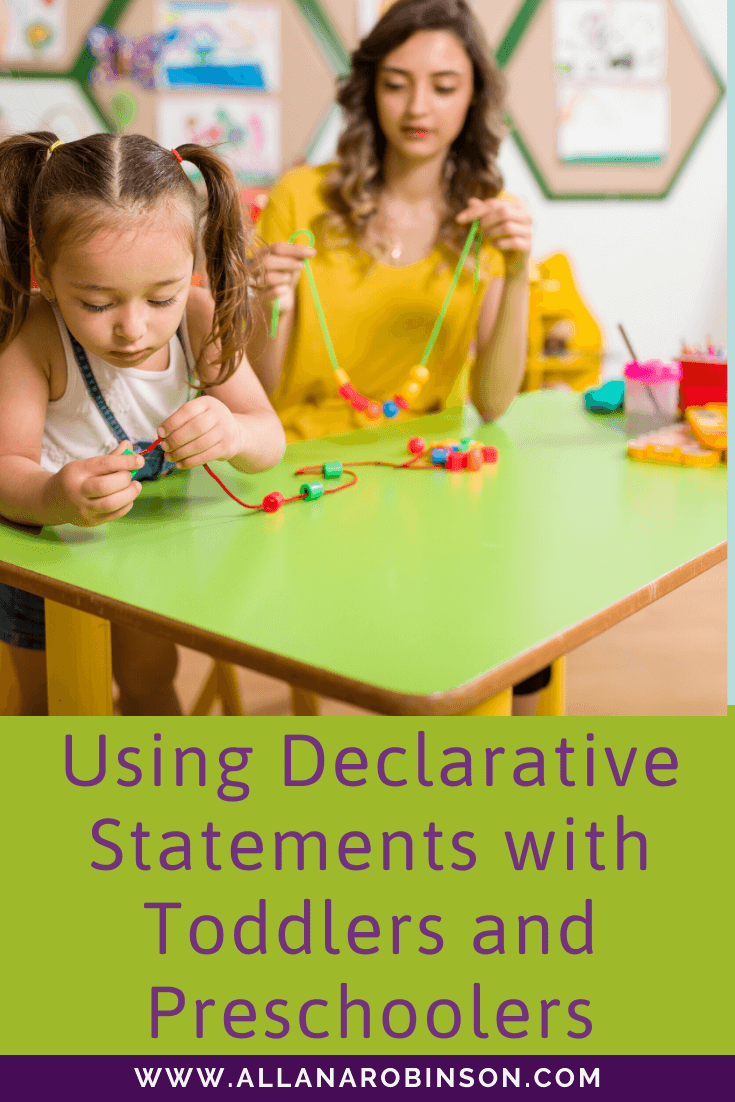 You can watch the video version of this post here.

How often do you find yourself saying things like “Stop that.” “Put that down.” “Come here.” “Sit still.” ?  I feel like as the mother I’m constantly barking commands that have little to no effect. Sound familiar? This is what’s called imperative language. Imperative language is used for functional purposes like making requests, asking questions, and stating demands. In particular, when we’re using logical consequences, using imperative language negates any of the positive behaviour guidance we’ve done to that point because it requires one correct answer- there is no grey area. It cuts off authentic communication because the response is subscribed. The alternative is using declarative statements.

So what are declarative statements?

I’ve often described it in the past as “talking like Captain Obvious.” Unlike imperative statements, declarative ones have no specific function- their goal is experience sharing. It’s the act of calling out what a child is doing/ the consequence in an extremely neutral manner- in the form of a comment. As is the case with most of our parenting strategies- using declarative language is a form of modelling. It simulates their inner voice which they use for problem-solving and planning. Declarative language also promotes a “big picture” view of issues. When we use imperative language such as “close the door” were focusing on one small detail. Using declarative language allows the child to notice the context of the exchange, integrate it with information they already know- and ultimately make a plan of action that makes sense.  The result of this is that children are forced to think critically and come up to their own conclusion vs. blindly following demands. Because the solution comes from them, they have a lot more buy-in: hello, compliance. (Yes, boiled down I just told you this is how we make kids think something is their idea.)

Timmy is constantly leaving the refrigerator door open. Every time he does- you say “CLOSE THE DOOR!” Right?

Let’s use declarative statements instead.  Were Timmy to leave the door open you could say “Timmy, the door is still open.”

What’s the difference? Well- Timmy’s got to think “Okay, the door is open. Why is she saying the door is open? Oh, because it should be closed.” Which is a much more advanced and critical thought process than “Close door? Door closed.”

We can apply this to toddlers too. Yes, even though toddlers are just beginning to be able to express their thoughts- they are able to think critically. The general rule is that a child’s expressive language is a year behind their receptive language.

Baby has just learned how to climb the stairs and is doing it every chance they get. You can’t just sit there and watch them climb stairs all day- as much as you would like to I’m sure- and rather than just gate them off you’d rather teach them to wait for an adult to climb the stairs, right? But after pulling them off and saying “Don’t climb the stairs without Mommy!” for the 400th time- you aren’t getting anywhere, are you?

So let’s reframe it using a declarative statement in the form of a logical consequence process: In this scenario, you’re trying to draw attention to the potential for getting hurt, rather than the act itself. “You’re climbing the stairs”- though declarative, is drawing attention to the act of climbing as though that is undesired behaviour. Which, in the grand scheme of things- it isn’t. You’re happy for your toddler to climb the stairs when you need them to.

In this situation- your declaration should be about the potential consequence, rather than the act itself. For instance: “The stairs aren’t a safe place to play. I’m afraid you’ll fall and get hurt.” This gives the child a chance to think “Why would I get hurt?”

Since declarative statements don’t give children the answer on a silver platter (Close the door. Stop climbing the stairs.) They have to use critical thinking skills to determine why you would be drawing attention to a behaviour they’re exhibiting, and decide for themselves to change it. This flips the motivation from external (I’m doing this because she told me to) to intrinsic (I’ve decided this isn’t a safe/good thing to do.) See how we changed this from blind obedience to their idea?

A final example from my real life:  when Logan was a toddler, he loved the dishwasher. To what I felt was a slightly unusual level. As soon as I opened it he was trying to climb inside it. No matter what else may be inside it. If I said “Stop it! Get down!” there as little to no effect- it might slow him down a bit, but for the most part, he persisted. And dishwasher doors are not built to hold 18lb toddlers. However, if I said “Logan, the dishwasher is full of dirty dishes. There are sharp knives in there, and the racks are spiky.” I got a big wide-eyed look and he would stare into the depths of the tub like he’d never seen it before. “I’m afraid you’re going to get hurt if you climb in there.” He would look up at me, sign hurt, and point at the washer tub. At this point, I would proceed with my logical consequence process by asking him what he could do instead of climbing INSIDE the dishwasher. Generally- he’d take off to another room and stay there.

I know this feels clunky. And drawn out. And snapping “GET DOWN!” is a lot more efficient- at least on the front end. However, once you’ve repeated yourself 800 times, using declarative statements and seeing results the first time becomes far more efficient.

Things to keep in mind:

Have you seen improvements in your child’s compliance when you switched to declarative statements? Let me know in the comments!