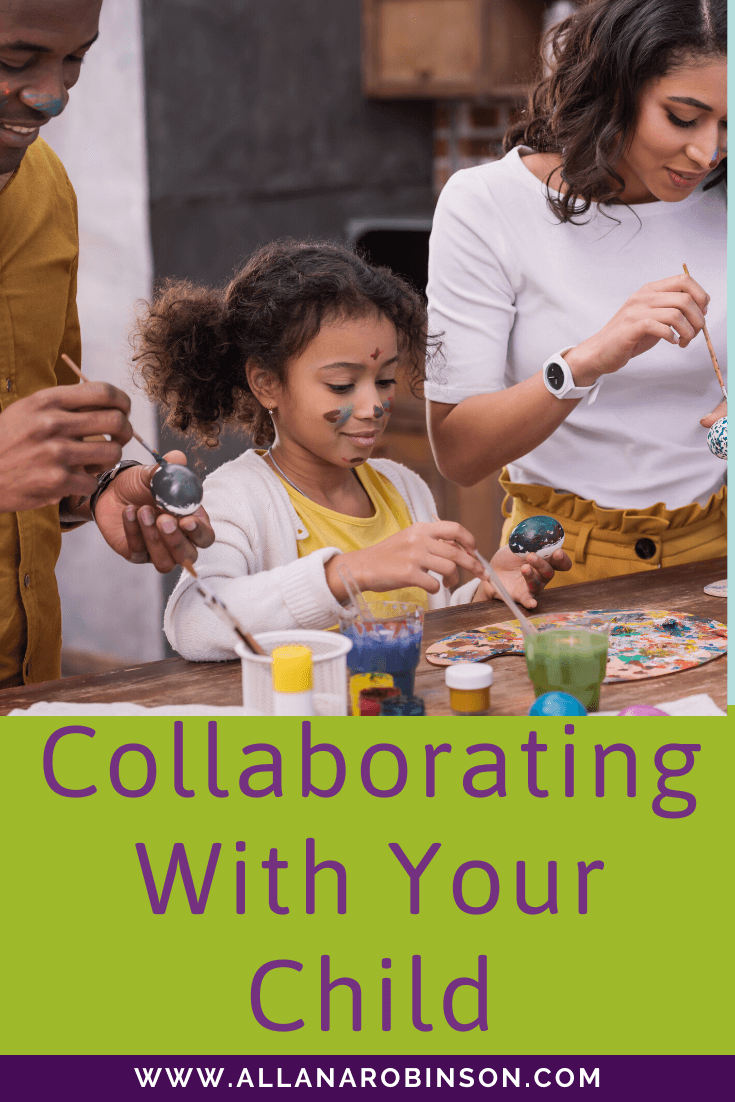 Collaborating With Your Child

Today, I want to chat about collaborating with your child and why it’s important.

Something that tends to come up in the Posse– an awful lot is people asking “What’s the logical consequence for this or that?” Because- if you don’t know- Natural and Logical Consequences are one of the main techniques that I teach and the Logical Consequence Process is one of my signature behavior management tools for when you’re in the moment, your instinct is likely to stick em’ in a timeout. But you know that’s not going to actually help. One of the main barriers to using the Logical Consequence Process is that parents seem to get really stressed out by it because they feel like they need to be able to really think on their feet a lot. And that’s really hard when you’re running on coffee and willpower.

Many parents go into the logical consequence process with the idea that they’re trying to get a certain outcome from their children. They see the LCP as a way to move their child towards a preordained solution. What they want me to say is “the Logical Consequence for X is Y.” And A LOT of people have asked me for a “cheat sheet” of sorts of typical logical consequences because they feel like they’re really bad at coming up with them. And they think that that’s why logical consequences aren’t working for them. Because the options they’re giving are bad. If I tell you that the logical consequence for throwing is that you remove the thrown item for the remainder of the day- many parents see the LCP as a way to manipulate their child into coming to that conclusion as well. And that’s NOT HOW THIS WORKS.

Here’s the missing piece: You’re not collaborating with your child.

What do I mean by that? Well, if go through the Logical Consequence Process- and I’m just going to refer to it as the LCP from now on because it’s a mouthful. So if you go through the LCP, you’ll notice that the second step is to ask a question and to wait for your child’s input. THIS IS WHERE MOST PEOPLE GO OFF THE RAILS. They skip that step altogether. They go straight from the declarative statement into giving controlled choices. THIS is why it isn’t working for you. If you’re not asking for your child’s input- and actually OPEN to it- your child is never going to move up the steps. The process is designed to be used in steps, and it’s designed in a way that- ideally- as your child gets more used to it, you stop having to go through the whole darn thing. SO many parents look at the LCP and say to me “OMG that’s so much to do!” You’re not supposed to be doing all of it forever. When you’re new to Uncommon Sense Parenting and you start using the LCP, or when your child is really young- of course, you’re going to have to go through all the steps. BUT- the idea is that as your child gets more used to the process, that THEY do it, not you. In a perfect world, you’d be able to use a declarative statement like “Your friend asked you to stop.” And they will take the appropriate action.

But while they’re learning to do it- that SECOND STEP is SO IMPORTANT. Because otherwise, they’re NEVER going to be able to do the process by themselves. They’re ALWAYS going to be looking to you to think on your feet and lead them through it. And that’s when parents start to get panicky. You’re jumping in too fast. You’ve got to give them some time to think and provide input. Because you will increase buy in 100 fold if they come up with the solution themselves. The time to move on to the controlled choices step is when they say “I don’t know.” or they give a random ass answer or they come up with a solution that is wildly inappropriate. If they come up with a halfway good idea- either go with it if you can, or you just tweak it so that it’s appropriate…like if in response to “What do we do when our friends ask us to stop?” they say “We give them a big kiss!” Okay…not really appropriate and probably going to be unwelcome- but I can see where they’re going with it so I can just roll it over into “You can tell them you’re sorry and ask to give them a hug, yes.” And then you end it with “Go do that.” Right? If they come up with a good idea- great- GO DO THAT. THAT is the Logical Consequence.

So you can breathe a sigh of relief that this ISN’T ALL ON YOU. It SHOULD be on your child. You SHOULD be working together. You need to get out of the mindset that logical consequences are punishments you need to enforce. STOP IT. They’re not. They’re a method of teaching your child what TO DO when faced with a difficulty. They’re a correction. If their friend told them to stop, and they didn’t stop- it’s not because they’re a little shit- they don’t know how to proceed. So the LCP shows them what they CAN DO. If they hit someone who grabbed a toy from them. The LCP shows them what they CAN DO in response to that. It’s not a punishment, it’s a framework for a teaching moment. BUT- if you skip the steps and you just go around throwing out consequences- doesn’t matter how connected they are- that’s a punishment. That’s an imposition of your will. You didn’t give them a chance to be an active participant. Punishments are something you do TO your child. Consequences are something you do WITH THEM. We want to work WITH our kids to teach them what TO DO so that when we aren’t there they can behave adaptively and correct when they misbehave. Because using Logical Consequences doesn’t guarantee your child won’t misbehave. But when they DO, they’ll know how to correct THEMSELVES. Whether or not you’re there to come up with choices.

If it’s THEIR IDEA- then they’re MUCH more likely to want to do it, and do it well! They have ownership over it. They aren’t relying on you to spoon feed them or monitor them- they just know how to do it.

When my son accidentally knocked a kid on his ass at daycare the other week he immediately apologized and asked the kid if they needed ice. And when the kid said yes- he went to the daycare supervisor and asked her to please help him get an ice pack from the freezer for his friend “because I hurt him, so now I have to take care of him.” And she was FLOORED. But he’s knocked his brother on his butt and kids at the park on their butt and friends on at playdates on their butts MANY TIMES so by now he’s really good at knowing what he needs to do when it happens. Would it be awesome if he didn’t knock anyone on their butt? Yes, but he’s human. He’s 4. Shit happens. I don’t want a perfect kid, I just want one who knows how to make it right when he isn’t. And then they feel competent, and like they’re trusted and self-sufficient, and that makes for confident, competent children.

That’s why I can’t make a cheat sheet for you of Logical Consequences because the solutions shouldn’t be coming from you- they should be coming from your children. What I CAN give you is the Logical Consequence Planning sheet. It’s just a quick one-page PDF that will help you keep track of your LCPs. Because almost universally, when a behavior crops up initially- we’re flying by the seat of our pants. It’s not going to be perfect unless your child is REALLY proficient at the process. So the planning sheet can help you to kind of debrief and think through the situation after the fact so that you have a plan for next time.