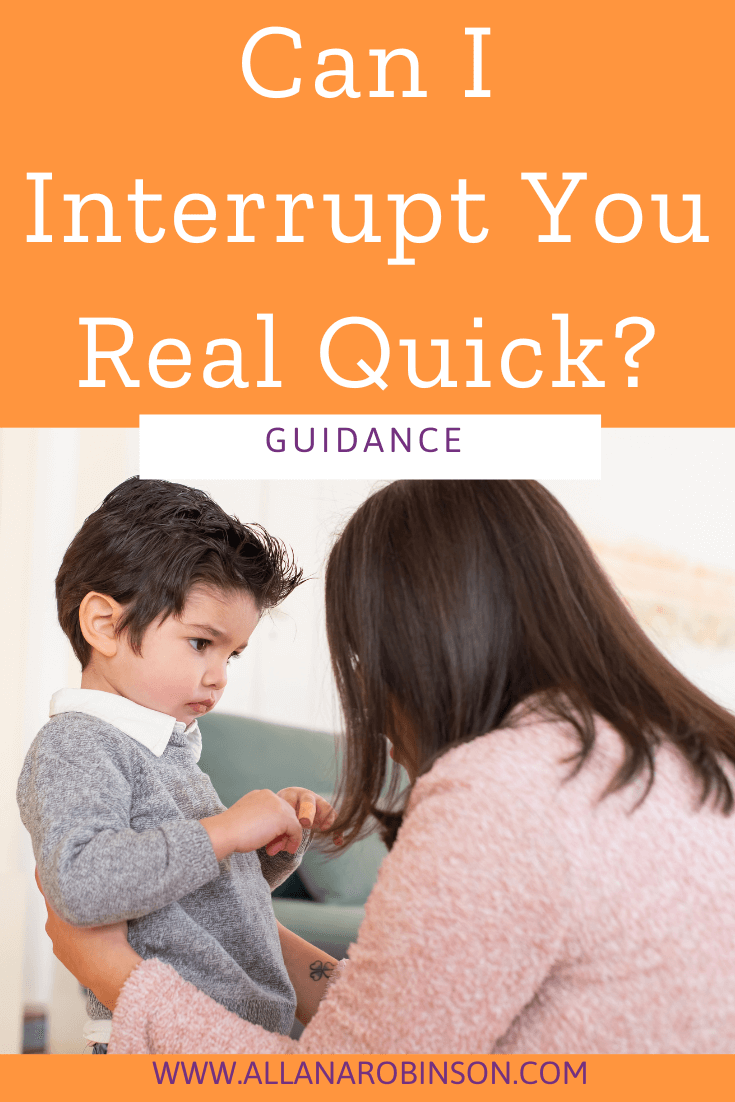 Can I Interrupt You Real Quick?

This is something I keep hearing parents complain about but very few people seem to know what to do about it other than telling kids to stop interrupting, which, unsurprisingly, doesn’t work.

Why do kids interrupt?

The short version is because their impulse control, working memory, and self-monitoring skills are still fresh out of the oven and are, in general, quite weak.

A child 6 or under has, at best, 4 years of using them under their belt which isn’t a lot in the grand scheme of things, because executive functioning skills don’t finish their natural development till around age 25.

They’re slow to grow and in order to not interrupt someone you need to be aware someone is speaking that’s self-monitoring, being aware of what’s going on around you and how it relates to you.

You need to stop yourself from blurting out what you want to say that’s impulse control and then once you control the impulse to verbally vomit, you need your working memory to hold on to what you were going to say until you have an opportunity to say it.

Therefore, ultimately, the solution to interrupting is to support your child’s executive skill development and we support building those skills through play.

Practice makes perfect when it comes to skills the more you use them, the better you get at them and figuring out which skill is causing problems, which one is the weakest link in the chain, is something we help you figure out in ParentAbility.

We have a whole library of ways for you to work on them with your child so that practicing them playfully isn’t something you have to spend hours researching you can just pick something and spend 10 minutes a day playing and be secure in the knowledge that you are actually supporting your child’s skill development.

Kids also need boundaries and direct instruction on what to do when they’re in a social situation.

Just working on their skills isn’t going to magically teach them how to apply those skills in an interaction.

I like to use stories to give direct instruction on issues like this and in ParentAbility we do have an interrupting social story for those of you who are already members it’s in the visuals library and you can just print it off and be off to the races.

For those of you who aren’t in ParentAbility, the general idea is that you want to tell the story from the perspective of your child.

When I have a really important thought, I want to tell me Mom or Dad right away.

Often, Mom or Dad are talking to another adult.

If I start talking when someone else is talking that’s called interrupting. Etc.

You’re explaining what interrupting is, how it happens, and then you’d go on to tell them what to do when they have something they want to say or talk about and someone else is talking.

I generally teach kids to put their hand on the adult’s arm to indicate they have something to say, or to stand off to the side with their hand up like they would in school.

I’ll also often teach them to use a mnemonic device to remember what they wanted to say.

If they’re wanting to tell me all about the T-Rex they saw in the book, they might remind themselves that they want to talk about T-rex and T-rex is green like the leaves on the trees or to bring the book with them so that they don’t lose their place.

Remembering takes a lot of energy and can be very difficult for some kids, especially those with potential ADHD, so often we need to explicitly teach them ways to remember what they wanted to say.

When they’re older that will obviously be writing it down, but pictures or associating what they want to say with something in their environment has worked really well for kids in the past.

Using a narrative to communicate this boundary and ideas for how to remember what they need to say works better than just verbally telling them because children are, in general, much faster at processing information they get in multiple ways, particularly visually. It also makes it really easy to review and give them the exact same information.

I hope that helps you reframe interrupting.

I know it’s extremely frustrating, but it really isn’t about a lack of respect, which is what everyone seems to assume.

It requires a lot of skill and energy because using those weak skills sucks a lot of juice, so don’t be surprised if, when your child is first learning not to interrupt, they need help regulating afterwards because using weak skills is very draining.

This is one hotspot area to keep an eye out for regulation issues. Once you attend to them it’s unlikely they’ll be able to just go back to playing or following the rules.

If you need help figuring out how to apply this to your family or you have more questions come join us in the Parenting Posse, we’d love to help you figure it out and troubleshoot any concerns that come up. I