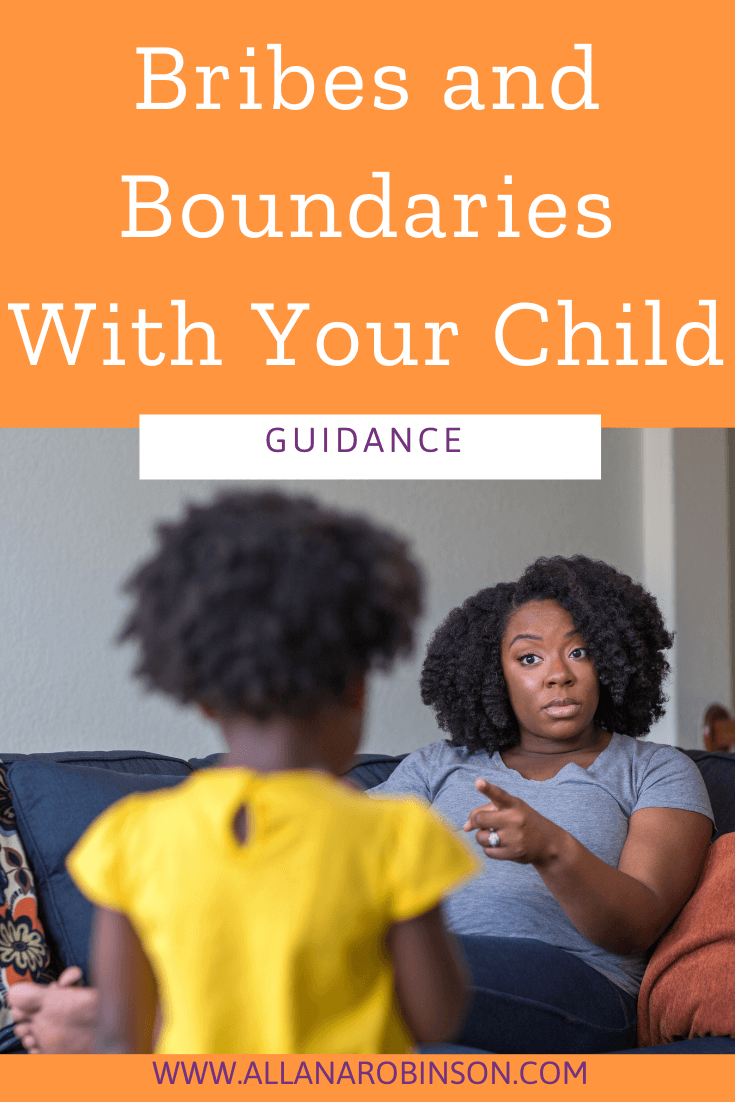 There was a discussion recently in the Parenting Posse that kind of blew my mind which, I’ll be honest, doesn’t happen much anymore. When you’ve been talking about child development and discipline and behavior management for so long I’ve been in this space for 15 years now, it’s rare that someone comes up with an interpretation of what you’re teaching that is surprising to you.

It was a bit of a shock when a Mom in the Posse got confused between how to set a boundary and bribing your child.

When I sat back to think about it, I realized there is often a very fine line between the two. If there’s one parent who has been struggling with this then there are likely thousands more who are confused and need some guidance as well.

The purpose, the function of a boundary is to give your child a space to operate within.

I’ve used the analogy of a pool before. There are concrete walls that contain that pool, and your child is able to swim around in it to their heart’s content. They’re either inside the pool, or outside the pool and it’s very clear which is which.

You can also have boundaries inside the pool, like often there will be a rope to delineate where the shallow end ends and the deep end begins.

Boundaries show us where the limits are, and they require reinforcement.

Your kid can get out of the pool, but if being outside of the pool is dangerous, you’re going to put them back in.

Same with the boundary within the pool if your child isn’t a competent swimmer and they cross over into the deep end, you’re going to bring them back to the shallow end.

You’re going to reinforce the boundaries.

Boundaries are predictable and firm, but they aren’t passive.

It’s really important for your child has to know what the boundary is before they hit it.

They must be aware that it exists, where it is, and what the consequences are for crossing it.

Taking the pool analogy further your swimmer needs to know that if they cross that rope, they won’t be able to touch it and could drown. You don’t want them to discover that through experiencing it, because by then it could be too late.

Boundaries allow children to make decisions that keep them safe.

Done right, a boundary becomes something you can lean on to rest they’re solid and can bear the weight of being tested, which means they can be learned from.

They’re a lesson in and of themselves.

They teach what will and won’t be tolerated, and they build that discernment skill for the child by experiencing the boundary over and over.

The purpose of a bribe, however, is to manipulate someone into doing what you want.

If you stay in the shallow end, then later you can have ice cream.

If you get back in the pool, then I’ll give you attention. It’s tit for tat.

First, you do what I want, then I’ll do what you want.

First, you give me what I want, then I’ll give you something you want.

Generally, the bribe isn’t offered until after the child has crossed the boundary, they’re unpredictable.

Usually, bribes have nothing to do with the limit you’re trying to set.

Ice cream has nothing to do with staying in the shallow end. They also don’t teach children what to do next time, what will and won’t be tolerated- even though that is the #1 reason most parents bribe their kids.

Similar to punishments they require kids to throw spaghetti at the wall and hope it sticks, to enter into a process of elimination.

If I go into the deep end, I don’t get ice cream. If I get out of the pool do I get ice cream? If I lean on the rope between the two, does that count?

Again, they have to push the boundary in order to figure out how to get what they want.

Often, bribes come with a counter-offer where the child will suggest a different arrangement to make the terms more favorable to them.

The line between these bribes and boundaries can be very thin.

A mother was asking what to do with her 4-year-old who had been sent home from kindergarten for misbehavior and someone in the comments suggested they tell him that his TV time in the afternoon was contingent on his good behavior at school.

That’s both a punishment and a bribe.

re: TV time in the afternoon has zero connection to his behavior at school. One has nothing to do with the other. The child had to mess up in order to discover that the adult was going to equate the two. The child has to comply with this before they get access to something they want.

There are a lot of unknowns, how much do I have to “behave” to get my TV time? What if one teacher is fine with my behavior and another isn’t? What if I get hurt and cry, is that not behaving? All of these variables need to be tested.

Where things seemed to get murky was when another mom said- go home and don’t let him watch TV and make him play by himself.

This is where context can really mess with things and children are extremely good at discerning context!

When I explained to the commenter that that would be a punishment and a bribe, she asked why?

Her toddler typically wouldn’t get TV until after dinner, so restricting TV wasn’t actually taking anything away. And that’s where that thin line of context comes in. The difference between a bribe and a boundary is often how you phrase it and enforce it.

You’re following your typical routine, TV time is at the same time it always was, and it’s not contingent on anything let alone his behavior.

The boundary you’re leaning on there is the boundary of TV after dinner.

That’s predictable, it’s been reinforced over and over, and the child expects it.

This sparked a whole discussion during a coaching call with another client.

She’d read that thread and was wondering well- how is that different from me saying “First we’re going to the park, then we’ll come home and watch a movie?”

That’s a bribe you’re expecting the allure of a movie to make your child agreeable to the park.

You said “First park, then movie.”

That’s a sequence of events.

It doesn’t matter if they enjoy the park- we’re going, and when we get home we’ll put on a movie.

A good indicator of if you’re setting a boundary or offering a bribe is was this planned?

Bribes tend to be spontaneous when an obstacle appears.

That wasn’t planned. It wasn’t on the schedule, you whipped it out to gain compliance.

However, if that was the plan, if the child was aware that your routine is to tidy up and then watch a movie afterward that’s not a bribe, that’s a boundary.

Another common one I hear is “Can I have candy!?” and the parents go “If you eat your dinner, then you can have candy for dessert.”

Bribe but just by changing the context and removing the contingency, you have a boundary.

“First we’re going to eat dinner, then you can have candy.”

The outcome of this situation is exactly the same.

If they don’t eat any dinner, then they can’t move on to candy but by removing the contingency, you give them agency.

They get to make the choice and that is a very powerful thing.

Hopefully, I cleared that up. Let me know if you’re still confused and we can revisit it. Try it out, because I find a lot of my clients are often still a bit murky on the difference between the two until they implement and they experience the difference in the tone, the reception, and the execution.

It feels different, and most parents feel that shift right away.

If you’re skeptical and this sounds like semantics, humor me and try to shift to a boundary and see how the results differ.

If you need to talk it out, come join us in the Parenting Posse and we would love to chat it out with you.