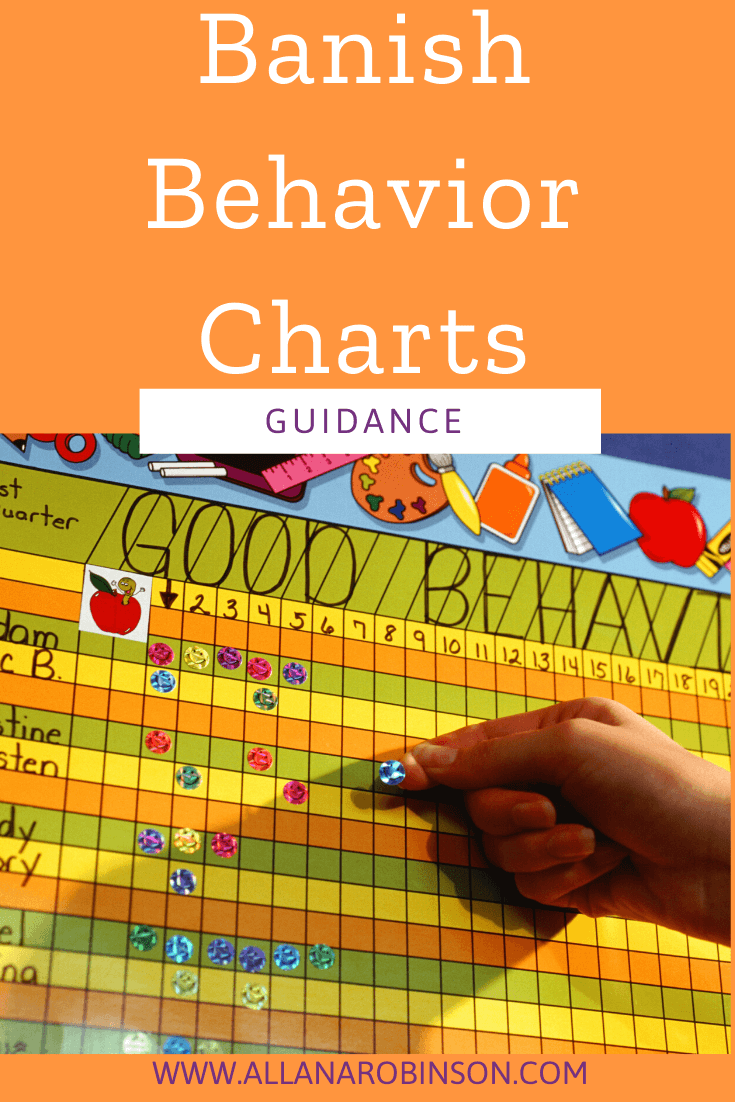 Today I want to talk about something that comes up A LOT in the Posse– especially when we add a bunch of new members, and especially at the beginning of the school year because we’re often dealing with new daycare and preschool and kindergarten classrooms with new system and teachers. And that topic is BEHAVIOR CHARTS.

These come in so many forms- a really popular one seems to be the stoplight system. But there’s also sticker charts, token economies, or any kind of extrinsic motivation! This INCLUDES when people pervert my love of visuals and start handing out rewards or punishments for completing or not completing visual schedules.

It’s one of the reasons I could not handle working in schools and that I was SO ANXIOUS about sending my oldest to school. And when I say this, people generally give me these looks of bewilderment and horror. Like- how could you hate behaviour charts?! As one of my teacher friends- who I’ve since reformed- said: “Behavior charts are one of the only control mechanisms we have left.”

And there it is folks: Control. Listen.

I get it, I’ve been there- I hate it. It’s why I never considered opening a preschool or a daycare of my own: managing 20-30 children with one or two adults on duty is HARD. WORK. You’ve got 20-30 different families that do things 20-30 different ways, you’re obviously not allowed to use corporal punishment- because it’s wrong- although apparently not illegal in much of the US. The American Pediatric Association has made a clear statement that removing recess for disciplinary reasons is unacceptable- again, for what I hope would be obvious reasons. So most teachers assume that leaves them with behaviour charts. Because- and this may shock you- teachers generally only have a couple of classes during their teaching degree in classroom management, and most of it focuses on engaging children in lessons- not behaviour management. There are LOTS of teachers both in the Parenting Posse and in ParentAbility- and repeatedly I hear about how nobody taught them how to actually effectively teach children how to behave.

So here are 4 reasons why behavior charts are no bueno:

1) They teach extrinsic motivation.
JUST LIKE TIMEOUTS- behavior charts teach you to only do something because someone else has told you to do it. They’re blackmail. “Keep your hands to yourself and I’ll give you a sticker!!” That wears thin really quickly- because chances are you have a reason for not being able to keep your hands to yourself. You have lagging skills like impulse control deficit or flexible thinking deficit. You’ve got a sensory need that isn’t being met and you’re either hyper or hypo aroused and you don’t know how to come back to calm. KIDS DO WELL IF THEY CAN. If they aren’t, it’s because they don’t know how. And no amount of stickers or rewards or removal of incentives is going to teach them skills they don’t have! Misbehavior and stress behavior are not character flaws. And “trying harder” is not a durable solution. Children have to WANT to behave in order to behave. It has to BENEFIT them, and to a greater extent than any pizza lunch or kit kat ever could.

2) They don’t teach a child what to do.
Children who are constantly on red, or never get a sticker, or never earn tokens- they begin to think there’s something inherently wrong with them. Because no matter how hard they try- they still don’t have the skills to do what you’ve asked them to do. So they try EVERY DAY- often REALLY HARD- and they NEVER get ahead. They always end up falling short. And that has a powerful psychological impact. Telling someone how much they suck at something doesn’t make them want to try harder. It makes them throw up their hands in frustration and give up. These systems basically put a marquee over a child’s head that says “FAILURE.” So they give up. If I’m never going to earn any tokens- I’m going to stop trying. If I’m going to be on red within the first 10 minutes of every day, fine, whatever, I don’t care anymore. And then we go “this works so well for some children, why not this one?” BECAUSE THIS ONE DOESN’T HAVE THE SKILLS NEEDED. And again- when you spend your time policing children for not knowing what to do, you never teach them what to do.

3) They support public shaming and group division.
What gets you moved up or down the chart, and what earns you a token or a sticker is completely decided without your input and arbitrarily. Teachers often make it up on the fly. Or parents threaten kids with losing a sticker out of nowhere. They don’t support critical thought on the adult’s end either. Rather than looking at what’s going on- thinking about and ASKING THE CHILD why it’s happening- and then solving the actual problem or supporting the child in acquiring the skills they need. And yes, I get it, you’ve got 30 kids in your room and spending tons of time figuring out everyone’s problems is hard. But if we

A) support parents in teaching children the skills at home

Then it’s actually easier and takes way less time than policing children for every misstep they make. If there’s a problem, you come together to figure it out. And you may be shocked at the self- sustaining solutions children come up with.  That is how we build a self-monitoring society. But behavior charts just label kids without skills as the “bad kids” and give the “good kids” an inflated sense of superiority. And often that means the ones who have good executive skills will figure out a way to make the children without them their scapegoats and misbehave anyways.

4)They put parents and teachers in the position of authoritarian.
Again, just like timeouts- children learn to only behave if they’re in danger of getting caught. If you’re not around, then there’s nobody to move the clothespin or revoke a sticker or deny a token or whatever asinine system you’re using. It also means the rules change based on who is or isn’t around. Or if they can just do it under the radar, then no harm no foul- nobody noticed so it’s not wrong. It makes kids sneaky. That’s not the skill we want them to have. It makes it very easy to have a thought process that goes “If I do this, I’ll lose a star, and I’m always losing starts so no big deal there, so I’ll do it anyways.” VERSUS “If I do this, I’ll hurt so and so, and that will make them sad. I don’t want to make them sad. So  I won’t do it.” CRITICAL THOUGHT. Using our executive skills. Building BETTER skills THAT’S what discipline should do. Not just condition them to check around the corner to see if you’re watching first.

All this to say that if we want our kids to truly behave better if we want to be able to back off, to trust them to do the right thing, to be responsible for their own actions- we need to teach them HOW. That needs to be the focus of our efforts- not just walking around pointing out when they’re failing to meet our expectations. These charts don’t fix the problem. And eventually, your kids grow up a little bit, have a few cognitive leaps, and realize that the fucking chart actually holds no power and they rebel HARD. Because they still don’t have the skills they need to behave. Our focus needs to be on COLLABORATING with our children to solve the problem, not on controlling them. Not manipulating them into doing what we prescribe them to.

Now, I know many parents and teachers use these charts because they genuinely don’t have any idea what skills a child is lacking or how to teach them. It’s not like math where there’s a clear progression of skills. But the FIRST STEP is to help your child begin to think clearly and to get out of the punishments and rewards habit yourself.

How’s everyone feeling about this? Make sense? When it comes down to it, they’re no different than time-outs. The exact same arguments can be made, only there’s a real public shaming/ psychological layer to charts too- especially when they’re used in schools and daycares. We have the power to be the change for our children, and for our children’s children. These methods are holdovers from the 90s and there’s been more child development research done since Y2K that was done in the 50 years prior. It’s time to stop living in the past, it’s 2018 people.