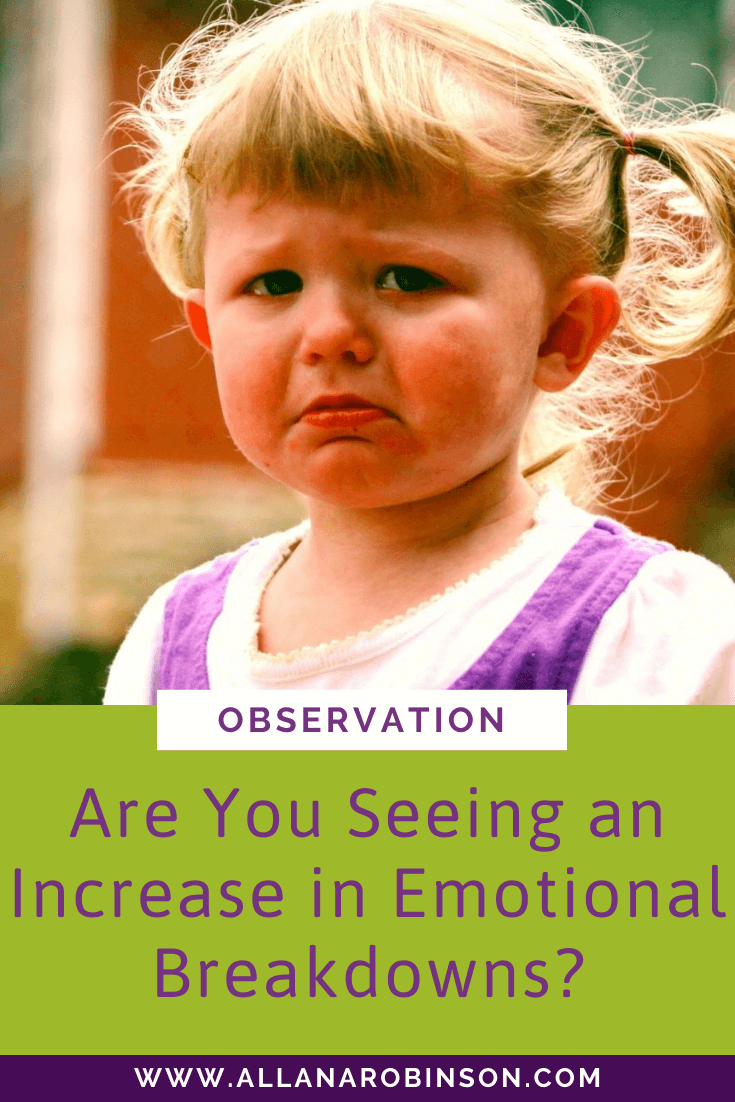 Are You Seeing an Increase in Emotional Breakdowns?

The affect the pandemic has had on our 4-year-olds

Our limbic leaping kids! This is coming up a lot in ParentAbility, it’s coming up in the Posse…It’s time to have a chat about what I’m observing and how it’s influencing our kids.

If you haven’t read to the blog on the limbic leap™  I recommend you go check that out afterwards because everything will make far more sense once you do.

The coles notes is that 4 year olds are going through a massive brain growth spurt, particularly in their limbic system their amygdala to be specific and the amygdala is the area of the brain that keeps us safe. It’s our security system. It’s going through a re-calibration. What served to keep us safe as infants and toddlers is no longer going to keep us safe as children and thus it needs to get bigger and stronger.

All that to say it’s very sensitive.

It’s often alerting to danger that doesn’t exist. It’s perceiving danger where there is none. This is why our 4-year-olds are generally super emotional and irrational.

Now, just like any other growth spurt, it’s a bit of an energy drain. Not just because growing takes energy, but also because their security system is on high alert so they’re expending a lot of energy being hyper-vigilant.

You know how after you watch a thriller movie you’re like- exhausted? This is because you were on high alert!

Well, same thing here only they perceive their life to be a thriller with unexpected and dangerous things around every corner and what do we call energy expenditure?!

You can check out this blog post on stress.

We’ve got these kids, who are going through this developmental stage that is very stressful. Who are, by design, alerting to anything new or unexpected as danger…and then a pandemic hit.

I think we all can relate to pandemic exhaustion. The hypervigilance we’ve has to sustain for the last almost 3 years now. Not only that everyone around us is hypervigilant too. We’re all on high alert for a danger that exists but that we can’t see or touch. There’s nothing we can point to and go “that this is danger.” It’s not like we can show them a hot stove and be like “this will hurt you” or point at a steep cliff and be like “if you fall off that, you’ll die.”

We can’t see COVID. We can’t touch it. There’s nothing we can put a pin in and say “this is the dangerous thing.” for them. Which, as you can imagine, is very scary for a child that is already alerting to perceived dangers that don’t exist.

This is one of those times where our biology is working against us.

We’re supposed to be able to reference the people around us to see if they feel safe too and if not increase our arousal to keep ourselves safe. Think of it in terms of cavemen if someone noticed a lion, we needed to notice them noticing the lion, and our kids to notice us noticing the lion. All that had to happen without a word to keep us safe but here’s nothing concrete like a lion here. It’s invisible and everywhere. They aren’t able to relax and calm down which means they’re expending a lot of energy on being highly alert.

Using my gas tank analogy let’s say for the sake of simplicity of argument that we typically have a full gas tank and for a typical child, the limbic leap™  is sucking half that energy during their 4th year. Add on top of that pandemic stress, and let’s say that’s taking another quarter tank. This means that our 4 year olds have been walking around doing life on a quarter tank this entire time at best. They don’t have the resources that they would typically have and when kids run out of energy that’s when those big behaviour events occur.

Here’s what I’m noticing with my own kiddo who turned 4 in June 2020, and with my clients who have 4 year olds at various points throughout the last two years:

The Limbic Leap™  is lasting Longer!

It’s taking longer for our 4-year-olds to chill out. My theory on why this is is due to something called canalization or entrenchment is another word often used.

Our kiddos who have gone through the limbic leap™  during the pandemic are not habituated to calming down and feeling safe more so than children who went through it before and that increased amount of time being hypervigilant seems to have canalized them into it.

They’re not used to feeling safe and to be fair the danger is still present! So it seems to be taking longer for them to chill out afterwards.

I’m noticing a stark difference between my own to my oldest was totally done with his limbic leap™  around 5. We had a few aftershocks, but nothing major. My youngest, however, is 5 and a half and still exhibiting limbic leap™  behaviour about half the time.

What to do about this?

Exactly what we do with the limbic leap™  we keep focusing on that predictability and consistency to help increase their feeling of safety. The more consistent and predictable you are, the less danger they will perceive. Doesn’t mean it’s going to shorten it, it just means that it’ll help manage it while it lasts.

Generally during the 4th year is when children start to understand that the people around them see things differently than they do. Both literally and figuratively. Well, the lack of social interaction over the last two years reduced the amount of exposure they got to various perspectives, and thus they have had less time to practice it.

I’m noticing that kiddos who went through the limbic leap™  in the last 2 and a half-ish years are having a harder time socially simply because that development got pushed down the road a bit, so now they’re contending with their typical 5-year-old development and perspective-taking development. The only thing we can really do about this is to continue facilitating their social exchanges when possible. There are going to be more conflicts, keep walking them through conflict resolution. There’s going to be more ego-centrism later than we would typically see. They’re just generally presenting younger social skills than we’d typically see. They’re all in the same boat, so this is mostly about adjusting our expectations vs any specific intervention they need.

oIf you need to talk it out, brainstorm some ways to cope for you OR your kiddo- come and join us in the Parenting Posse, we’d love to help you figure it out.