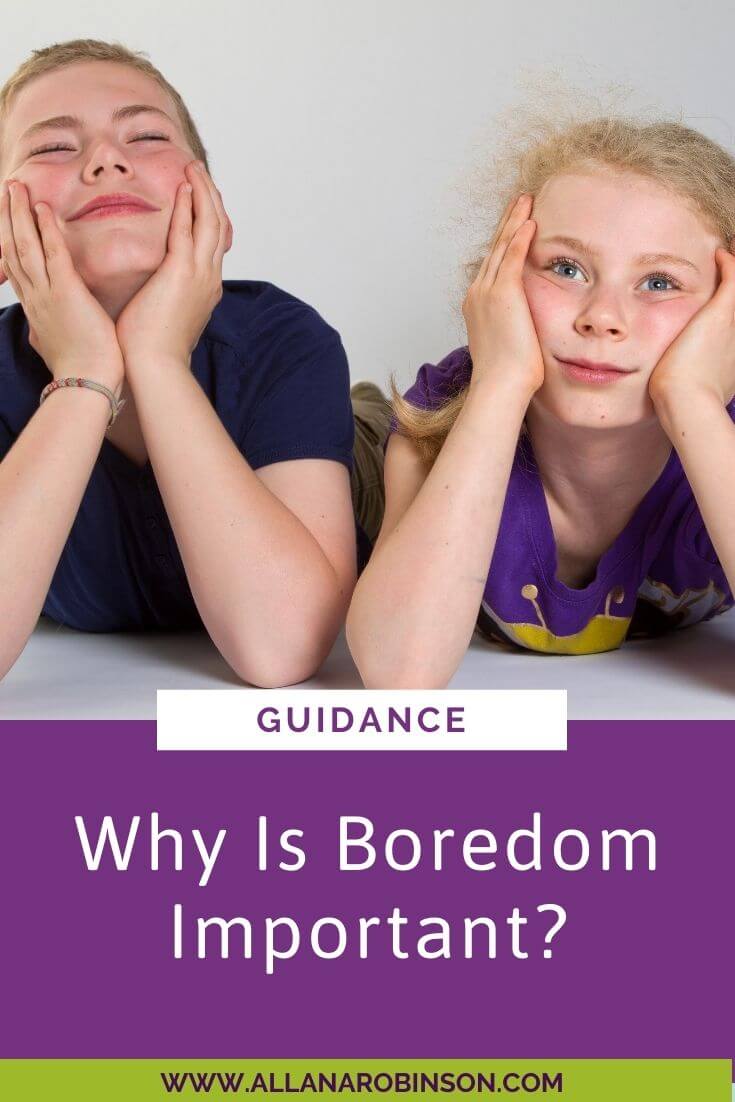 Why Is Boredom Important?

Today’s topic is boredom. One of the top questions I’m asked is, “How do we prevent our children from getting bored?” I understand where you’re coming from because bored kids get into shit. They ask for a thousand snacks, they yell, they jump on furniture, they climb things they shouldn’t be climbing, and they make messes. And as a mother who works from home full time and who has two very busy little boys home with her full time, I get it. I want us to look at what boredom really is, why it’s important that our children experience it, what they learn from it, and also why we’re so scared of it.

When we get overstimulated from being over-entertained and run out of energy, our body will produce cortisol to allow us to continue experiencing the entertainment. If the brain is being stimulated, it’s getting hits of these feel-good hormones called peptides. The brain wants to keep feeling good, so when it gets tired, it produces cortisol, the emergency energy to keep us alert enough to keep engaging in the entertainment, which keeps giving us peptide hits. This is all well and good until the entertainment stops. And now we feel…YUCKY. Because we’re full of cortisol and we’re not getting any peptides anymore!

So now our brain produces another hormone called dopamine. Dopamine makes us look for opportunities for peptides. This whole process is what is happening when you’re trying to find something to watch on Netflix at night, and nothing looks good, so you end up scrolling the catalogue for an hour. That’s your brain on dopamine.

It’s looking for something to provide you with peptides. Only with our kids, they’re scrolling life. They’re looking at their toys and their environment for something that will give them a peptide hit, to take the physical discomfort of boredom away. When they come up short, this is usually when you hear the “I’m BORED!” whine.

If you didn’t know any of this, you’re very likely to do the exact opposite of what is actually needed: which is to help your child calm down.

You’re most likely to stimulate them more. Which is a problem, because your child is already running on backup emergency energy. If we don’t help them calm down and refill their energy tank, they’re going to hit a wall. You will then find yourself in the situation where your child isn’t happy with anything you offer, nothing you set up for them is good enough – even tried and true activities, eventually ending in your child either melting down or crashing out.

The true way to avoid boredom isn’t to provide 52 Pinterest Inspired Crafts, but to teach our children to recognize when they’re running low on energy and need to take a break. Which is something we help you do in ParentAbility. The entire first month of your membership we’re focusing on helping our children recognize when they’re stressed and how to teach them to calm down. That said, this doesn’t mean your child will never be bored again.

Most adults still have times when they miss their own cues and get overstimulated. And that’s not actually a bad thing, because boredom presents an opportunity to self-regulate. The very fact that we’re bored means that there’s no easy and quick way to solve our problem, so it opens up this prime time for creativity. We start seeing possibilities in objects, our environment, and ideas that we weren’t able to see before.

And this very open, seeking, creative state means whatever we eventually land on after being bored often results in opportunities to problem solve, innovate, and practice persistence. All of which are qualities and experiences many parents pay huge amounts of money to cultivate in their child through extra-curricular activities.

If boredom can be avoided, and when it does happen it’s not even bad for us – why are we all so scared of it?

For one, boredom is not just mentally uncomfortable, it’s physically uncomfortable. Being dysregulated does not feel good! If you grew up in the late 80s to late nineties…you were fed the fantastical expectation that you should never experience any discomfort at all. When we should have been practicing feeling disappointment in the safe realm of childhood disappointments, we weren’t. Now as adults, it’s not just uncomfortable but it’s also really unfamiliar. We don’t know what to do with that.

Which leads me into the second reason we’re scared of boredom: Marion Diamond. Diamond is one of the mothers of neuroscience. In the 60s, she was running experiments on rats in her lab to figure out what kind of stimulation made them smarter. Diamond published findings that said that rats that lived in an enriched environment had bigger, thicker, more complex neocortexes- which is where all our language, executive functions, reason, and knowledge live in our brain. In other words, they were smarter.

This idea that if children are always in “enriched” environments, they’ll be smarter, took hold very quickly in popular culture. Our parents got the idea that if we’re not constantly having “enriched” experiences, then we’re going to be dumb. Enriched how? With academics mostly. With engagement. Bright lights, flashing colours, lots of stimulation.

When we actually look into the research, it shows that the kind of enrichment that made the rats get smarter was that they engaged in a lot of social play. It wasn’t passive enrichment of the environment with lots of cool stuff for them to look at and do that made them smarter. It was playing with each other. All of this to say, boredom is uncomfortable, and we got the wrong message that unless our children are being constantly stimulated, they’ll be stupid. So the idea that our child is lacking stimulation isn’t just annoying now, it’s terrifying! Ultimately, it’s not the truth.

What should you do if your child is whining that they’re bored?

Give them some loose parts and some space to be creative. Encourage them to daydream. Encourage them to go do something you know is calming for them. I discovered about a month ago that if my youngest is bored and I tell him to go sort the Lego by colour…he’ll start by sorting but before you know it he’s found a piece that inspires him and he will create the COOLEST stuff. Lego is very calming for my boys, but if I say “go play lego” they feel a lot of pressure to come up with a plot or an idea for a build. Whereas if I give them a task with the lego like sorting by colour, it’s mindless enough that they can still daydream, but they’re still interacting with a calming, creative thing and can go where their mind takes them.

For little ones often doing things like offering water play or paint or even crayons and white paper is a good place to start. I got so much work done when my two were younger by setting them up in a dry bathtub with tempera paint. They’d have a whole masterpiece going in there.

My boys know now that if they say they’re bored I’m most likely going to say “then go outside.” Outside is a perfectly balanced sensory environment, and it rarely takes long for inspiration to strike out there. The problem is that many of us haven’t created safe space in our homes for our children to play independently, we haven’t set our environments up for success, so we try to avoid boredom because our homes aren’t set up to protect against bored 3 year olds who are trying to get a peptide hit by eating a whole box of Honeycombs.

By changing how we respond to boredom, we’re most likely going to have to do a serious inventory of how our homes are set up to ensure that we can give our children the space to be bored, especially if they are unsupervised because we have to work. The good news is that as your children get more used to being bored, they’ll learn the boundaries and you’ll actually get longer work periods because when a child gets involved in something after being bored they generally become absorbed in it for quite a while. We just have to get through the discomfort first while they learn now to navigate it.

Do you see boredom in a different light now?

If you’re needing support on how to introduce and navigate boredom with your kids, please come join us in the Parenting Posse. We’d love to help you figure it out.

If you’d like to learn more about how to help your child regulate and how regulation intertwines with a couple other factors to make or break good behaviour, make sure you get on the waitlist for ParentAbility and you’ll be the first to know the next time we open up registration!