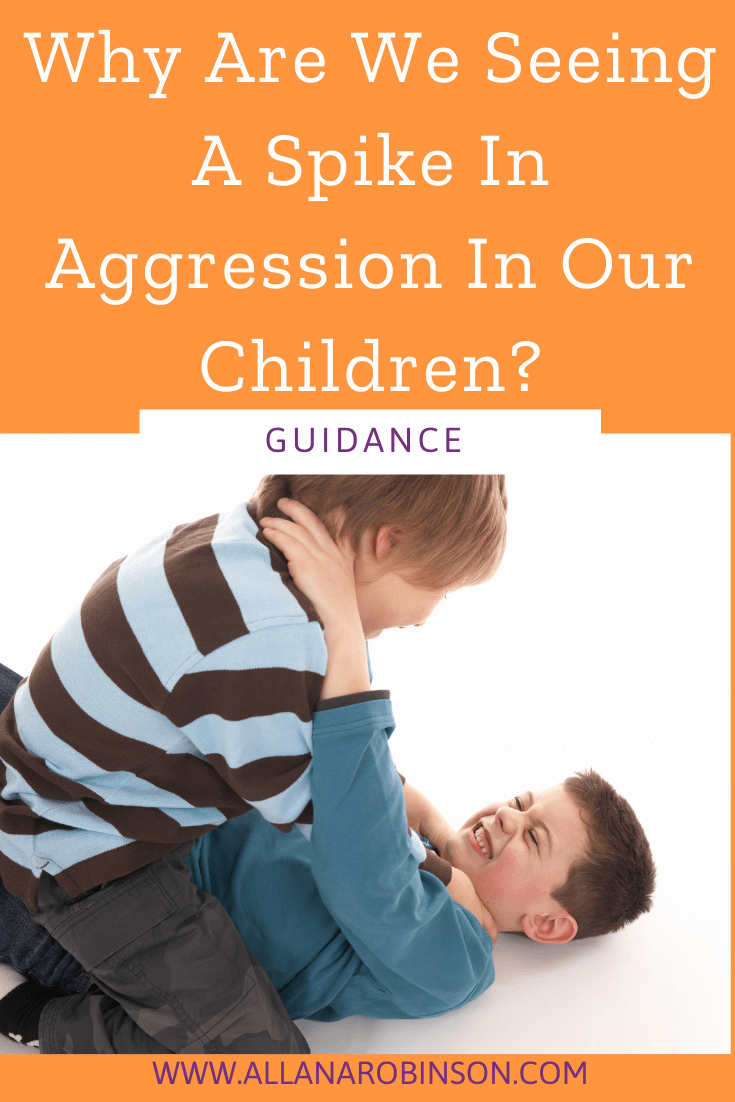 Why Are We Seeing A Spike In Aggression In Our Children?

Let’s talk about it. Hitting, biting, kicking, pushing…parents are complaining more and more of children exhibiting aggressive behaviours as we move into the better weather, many places are coming out of the Covid quarantines and are beginning to return to life as normal.

Ontario is still in a lockdown, but it is coming and generally we’re seeing more and more opportunities for out kids to interact with more people.

The move into things opening up, we’re seeing this increase in aggression and it has a lot of parents really freaked out. My job is to make sure you don’t freak out and help you do a course correct.

There are two kinds of aggression:

Rarely does a single instance of aggression fit neatly into one of those boxes. Humans are complicated. Nothing is straight forward.

However, what those two boxes DO do, is allow us to narrow down what is most likely going on. Those boxes also eliminate all those fake stories our minds make up about our kids when they’re exhibiting aggressive behaviour like “they hate me” or “they’re trying to manipulate me” or “Omg I’m raising a psychopath.”

None of which are helpful or true.

Remember our motto that we stole from Dr. Greene?

Kids do well if they can. This means if they aren’t, there’s a reason.

These 2 buckets, we have 2 good places to start looking for why they’re struggling to meet our expectations and all those catastrophic stories don’t fit into either, so we can just let them go.

Let’s start with what I feel is the simplest possibility to explore: dysregulated aggression. As the name suggests, this kind of aggression is driven by a stressor. There is a demand on them that they cannot meet given the current amount of energy they have. In other words, they don’t have the ability to stay calm enough to do the thing.

What do children do when they know there’s a demand on them, but they aren’t calm enough to do?

It wasn’t a trick question. How do children typically regulate? Through sensory input!

Chances are, if your young child is hitting, biting, kicking, pushing, that gives you a BIG CLUE as to what kind of sensory input would help them regulate! Your red flag that says “oops, they need some help calming down.”

Our brains are very efficient, they want to take the path of least resistance. The path that is most likely to solve the problem as quickly as possible and if they’re low on energy and can’t use their executive skills. Their brain is going to go “oh, well if I hit this kid I’ll get the sensory regulation I need AND I’ll solve the problem of getting them out of my face! TWO BIRDS ONE STONE BABY!”

They don’t have access to that top level of their brain that is rational and warns them “um…but that’ll hurt them and get us in trouble.” This is why often you’ll see your child hit someone or push someone or bite them and AS SOON AS THEY DO IT- you see it register on their face that they fucked up. Because when they get that energy boost they needed from the sensory input that reasoning comes back online QUICKLY. And they instantly realize that was a bad idea. Now that doesn’t always happen- sometimes they’re far more drained and it takes a lot of sensory input to re-regulate them…the kids that turn on you when you intervene and start acting like a wild animal? Those kids are DEEPLY dysregulated and they can’t calm down without help. Those kids were holding it together by a thread for a LONG time and couldn’t figure out how to re-regulate and then boom- suddenly this thing happened and it was too late.

What do you do if you think your child is dysregulated?

Regulate them. Calm them down first.

Remove them from the situation, and focus on getting them truly calm and reasonable. Then once they’re calm, move into two logical consequence processes.

The first focused on how they could have regulated more appropriately whether that’s asking for something they can bite, hitting a soft object like a bag, couch, or bed or even something not-so-soft like a tree if you’re outside. Requesting something they can safely throw like a ball or some stuffies.

Whatever will give them that input they need without actually hurting people. What they should do next time.

After they’ve demonstrated that ability through role-play, then move on to an LCP about how they can make amends.

NOT apologize, how they can demonstrate remorse for hurting their friend, sibling, or peer. There’s more information about the logical consequence process on my blog if you want to dig deeper into what that actually looks like in practice.

This does two things:

It teaches them what to do instead, and it makes them take accountability for their actions without making it a huge thing. Remember- the LCP isn’t about shame, it’s about repair. If these are your own kids or you’re the only adult in the situation, always make sure the victim is safe and taken care of first, and then go back to the aggressor and calm them down and proceed with your logical consequences. Always always take care of the injured child first- unless there’s an adult for each kid, in which case one deals with the victim while the other deals with the aggressor.

The second kind of aggression is a maladaptive play invitation. We’ve talked about Maladaptive Play Pnvitations in the past, there’s a whole article on it on my blog and we have a podcast on it too if you’d like in depth info.

The short version is that children, especially children who don’t have siblings or who haven’t had a lot of social opportunities lately, which is basically every child on the face of the planet right now, often forget to communicate their intentions to those around them and just jump straight into play with two feet. They forget about the preamble.

A really common example of this that I see constantly as a mother of two boys is little boys who will just seemingly out of the blue tackle another child. They’ll push another kid and then run away laughing and looking over their shoulder to see if they’re being chased.

In their mind, they’re initiating a physical game, but they forgot to let their play partner in on it. To the other child it feels like a random attack. Little girls can obviously do this too but it’s more common to see girls use maladaptive invitations like grabbing a toy another child was using in an attempt to insert themselves into the game.

They forget the bit where they have to say “Hey, can I play with you? What game are you playing?”

They just jump right in.

As stated, you can usually tell this type of aggression because the aggressor is smiling, or they seem confused when the other child reacts negatively. They want to play! But they don’t know how to initiate that interaction, so they do something that guarantees a response.

They need to make amends first, and then use the LCP to help them navigate inserting themselves into the play.

This might sound like “you want to play with Jorah. How can you ask Jorah if he wants to play with you? You can say “Can I play too?” or you can say “Jorah, want to wrestle?”

“Okay, let’s go ask Jorah if he wants to wrestle with you.” Then go with them and help them navigate that conversation.

The format for the LCP is on the blog. It’s the same process no matter what the situation is, you just tailor it depending on what kind of problem you’re solving.

Remember you can only use a logical consequence process if they’re CALM!!

If your child uses a maladaptive play invitation and is running away laughing maniacally and then escalates when their friend doesn’t reciprocate. You’ve gotta calm them down first. This often happens because the logic they’re using is “oh, they aren’t jumping into this game, maybe I just have to try harder or make it more explicit.”

I’ll note that I try and pause children’s play when they use a maladaptive play invitation even if the other child does reciprocate.

This is where teaching consent comes in.

If my younger son jumps on my older son and my older son immediately starts wrestling with him, I will still go “whoa whoa whoa- I didn’t see any consent received there.” I will make them pause and get consent from each other anyways because I don’t want them to think that it’s ever acceptable to just launch into play even if the other person seems mostly receptive.

Rarely is it just dysregulation vs play invitation.

Often it’s that they want to play, but they’re dysregulated, so they’re trying to get another child to play in a specific way with them to help them regulate, so they just launch into it. When the other kid doesn’t reciprocate they’ve used the last of their energy and lash out.

In which case you may find yourself doing 3 logical consequence processes!

The great thing about the LCP though, is that the more you use it, the less you have to use it. Once a child is well habituated to it, you can usually resolve a situation by making a declarative statement. Like I rarely have to walk my sons through making amends or getting consent anymore because I can just say “You didn’t get consent” or “You hurt your brother” and they now know what to do, because we’ve done that LCP about 40 thousand times.

The idea behind the LCP is that your kids will eventually become so competent that the most you should have to do is point out the problem they need to solve. The more LCPs you do, the better they get at it.

I hope that helps you reframe and rethink your child’s aggression. I know keeping those two buckets in mind really helps my clients be more empathetic and calm when their children have aggressive instances, and it’s much more productive because instead of relying on shame to deter them from being aggressive. We teach them how to actually solve the underlying problem. If you’d like more ways we can teach our kids how to do the right thing, there is a free script pack and it gives you some guidance on 10 really common behaviours and how to address them proactively and calmly.