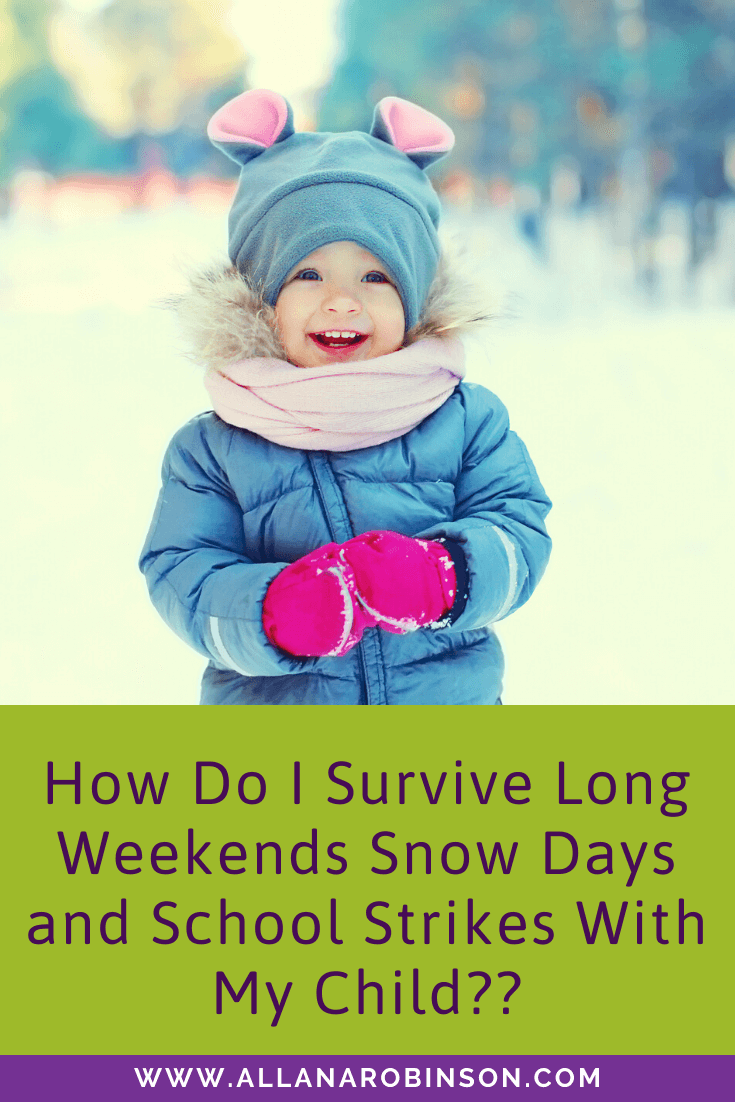 Are you trying to survive unexpected “home days” with your kids?

This issue is coming up more often in my personal life due to the Ontario Teacher strike, which means my oldest has been home a lot more than usual the last month or so.

Whether you live semi-local to me or not, everybody has those unexpected home days. Daycare closes because of a water main burst, snow days, the park has no power. The weekends can even be unexpected, I know a lot of parents find themselves kind of flummoxed with what to do at home and with little kids.

Life is complicated and sometimes the best-laid plans don’t work out. These days can be really stressful, especially if you generally have a pretty tight routine.

Here are my top 4 tips for surviving these unexpected “home days” as unscathed as possible:

One: Create Some Kind of Structure

This doesn’t mean that you still have to get your kids up at 7 am when you get a bus cancellation notification just so that your schedule stays “consistent”.

We’ve talked about the difference between routines and schedules before.

What you want to have in your back pocket for these kinds of days is an expected routine.

The “playtimes” can get swapped out for a structured activity or errands or what have you if needed. The general flow to our day, and my kids know it. It’s the same routine we use on weekends, only I might not be working. We might be doing yard work, or working on our hobbies, or laundry. The general routine to the day is there and my kids can follow it pretty independently.

Two: Give Your Kids Independence

Get out of their grill!

Teaching children to play independently takes time. It’s not just as easy as saying “go play”. On weekends, and on these home days, it is an ideal time to start working towards that.

Get your children used to not having to be entertained.

I have had several parents complain about how busy museums and indoor playgrounds and other kid-friendly public spaces are on strike days and it just blows my mind.

I would NEVER take my kids into public on a day like that, because of COURSE it’s going to be a zoo and that’s going to stress everyone out! So don’t!

This is a great time to =start working towards that independent play on these days so that you can get to the point of saying “go play” and they will.

We’ve talked about how important independent play is before.

Our children do not need us to be in their faces all the time and the fact that they’re “missing a day of school” or daycare or preschool or whatever, doesn’t mean that you have to recreate that environment at home. It also really facilitates your ability to stay in your routine because if your kids are playing by themselves then you can take that telemeeting that was supposed to be a face to face meeting. You can call into the office. You can get some work done while occasionally refilling their bowl of goldfish crackers! Which means you may not have to take a day off of work.

Three: Send Them Outside If It’s Safe to Do So

Here in Canada, a major cause of unexpected home days is the proliferation of snow we receive, but the thing is that it actually has to be somewhat mild for snow to be able to fall. Snow days are not typically extremely cold days. So bundle them up, set a timer for two hours, and send them out!!

If it’s safe, send them out!

You can use a visual timer. I generally stick mine in the window and turn the alarm off on it. The reason most kids have difficulty playing outside is just that they need time to get into their play. Once they’re in it, they’ll stay there for a LONG time. When you use the visual timer helps free up their brain because it’s not preoccupied with monitoring you, they can see how much longer they have.

Usually, once they’re in their play, if nothing interrupts them, you can get 3, sometimes 4 hours out of them. This is why I turn the alarm off, I’m happy to let them in if they notice the time has run out, but I don’t want to ALERT them to the time running out.

If you have an expected time to go outside to play, and your kids are accustomed to playing independently and they’re playing outside, then it frees you up! Work! clean! Have a hot cup of coffee.

The stress of unexpected home days usually comes from feeling like you have to be on and engaged and that you have to whip up a plan at the last second. Kids will generally come in from being outside much calmer because the outdoors is a perfectly balanced sensory environment and they’ll usually be exerting themselves somewhat outside. This means that the time after they come back in is usually more relaxed as well.

FINAL TIP: Basic Supplies In The House For Activities

If you must do some activities or your kids are really just at loose ends: make sure you keep some basic supplies in the house for activities that don’t require much supervision and are time-consuming and only pull those activities out on these days.

My personal favorite one is painting in the bathtub. I stick both my kids in our standing shower or our tub, I give them each a bunch of tempera paint. I keep those big preschool-sized jugs of tempera in our utility closet, just in primary colors, and I give them some brushes, and I tell them to go ham.

Sometimes I’ll throw some music on, which is really interesting to see because their art usually reflects the emotion of the music. They can generally do that for like an hour and a half. Once they’re done, I give them soap and sponges and they clean the tub for me, and then I wash them.

Double whammy! I get an hour and a half of relative peace, they get some artistic expression in, I get a clean tub and clean children!

I actually got my youngest these Tempera paint sticks for Christmas. They’re like- chunky paint markers, that kicked it up a notch because they can kind of draw with them, which keeps them in it for a lot longer even.

Washing toys in the sink is another one my kids really like. I’ll give them a bin of dirty toys and set them up at the kitchen sink with it about half full of soapy water and a scrubby and they will happily wash toys for eons.

LEGOS! My kids are into Lego they’ll happily play Lego forever if I give them some inspiration like “build a construction site.” Ever family and child is different, but know what those things are ahead of time so that you’re not running around like a chicken with your head cut off if. When you need them and then you end up in an overcrowded indoor playground that’s infested with the plague during flu season.

Teach your kids to play independently during routine times during the day, and these unexpected days won’t feel quite so stressful and overwhelming.

If you want a refresher on how to teach your kids to play independently, there are several posts on my blog which you can find by going to allanarobinson.com/blog and typing independent play into the search bar and they all come up!