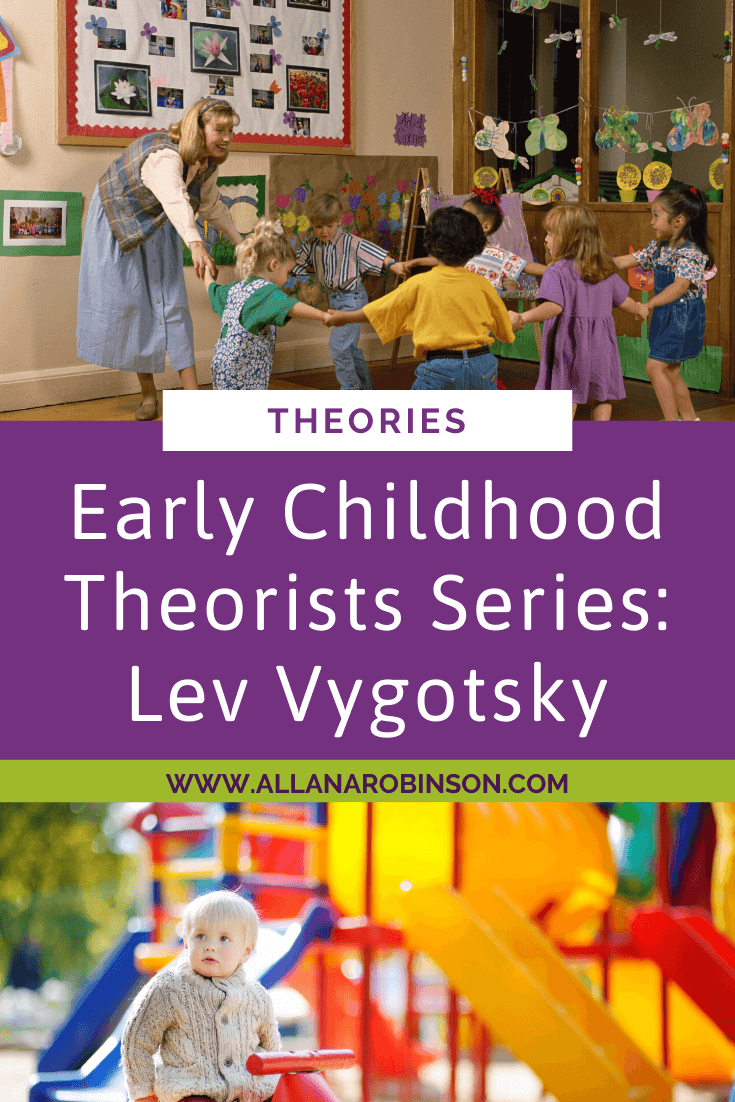 Vygotsky is the Father of Constructivism.

But we’ll talk more about what that means in a minute. First- let’s go over the relevant dates: Lev Vygotsky was born in 1896 in Soviet Russia- in an area that is now Belarus. He graduated from the University of Moscow in 1917 with a degree in literature, and he passed away in 1934 from tuberculosis. So he was around at the same time as Piaget, Freud, and Montessori, they all knew of each other and kind of challenged each other’s ideas.

Constructivism posits that knowledge is built. It’s constructed. And children construct their knowledge from their lived experiences. If you’ve ever attended one of my webinars or spent even a tiny bit of time in the Parenting Posse– you probably know that Lev and I are BFFs. Children build their understanding of the world by what they experience. If a child has an experience over and over, they’re going to understand that experience as truth until proven otherwise.

Now- when Vygotsky came on the scene he kind of turned the early childhood development world on its head because he didn’t have any specific training in psychology or child development. His degree was in literature. So he really brought a fresh and kind of unconventional perspective to the field- especially in that he really believed that qualitative research- so observation and children’s demonstrations of their competence- is just as if not more valid than their test scores. Which- modern research has really validated and the modern education system is slowly starting to incorporate.

Lev Vygotsky’s theory is called the Theory of Cognitive Development.

This is the stuff they can’t do all by themselves, but they can do with a little bit of guidance and support from what he called the More Knowledgeable Other. We tend to call these people teachers or guides. Vygotsky’s work is really centred on the fact that social and cognitive development work together and build on each other- you can’t learn in a vacuum. Your development is literally shaped by the adults and children in your environment who you interact with on a daily basis. And that’s really his primary contribution to our understanding of young children: the importance of teachers in advancing children’s knowledge and development.

So I’m sure you can see where this is going:

All this means that PARENTS have a HUGE influence on their child’s development.

So we teach, the child internalizes and then uses that internalized information to regulate their behaviour. This person doesn’t necessarily have to be an adult- it can be another child.

An example of a child moving another child through their Zone of Proximal Development from my own life:  I’d been trying to get my oldest son to understand the concept of peeing standing up outside all summer long. Which is a difficult thing to teach as a woman as I’m lacking some of the necessary parts. So it really wasn’t working all that well. I tried to help him, I tried to explain it, I tried just setting up the environment so that he had to try. It wasn’t working. I was TRYING to scaffold him through this- because “This is supposed to be one of the benefits of having boys, right? Not having to always run to the bathroom?” But I wasn’t able to.

BUT- my sister in law and her family came to visit at the end of September, among them my 8-year-old nephew. And we were out in the backyard and he said he needed to pee and his Dad was like “Well- there’s the woods.” And I got all excited and said “Hey, can you show Logan how to pee in the woods?” and my nephew gave me kind of a strange look and said “Okay Auntie” and off they went. He and Logan marched off into the woods, and Logan came out knowing how to pee outdoors. Bing bang boom. The more knowledgeable other guided him and he picked up something he otherwise wasn’t able to. My nephew gave him the example- by showing him, by explaining it to him. He scaffolded Logan through that learning. Logan couldn’t figure it out by himself. He was physically capable of doing it, he just didn’t have the knowledge of the how. He was in his zone of proximal development. My nephew gave him just the right amount of help he needed to figure it out.

Vygotsky believed that in order to scaffold children well- guides need to be keen observers.

We need to watch what they’re doing, see what they’re trying to do, and where the gaps in their knowledge are. Our job as parents, as guides, is to give them the minimum amount of help we can that will help them connect those dots. This is where that qualitative research comes in- if we see that a child can do something functionally- we don’t have to go and test them formally. That expression of competence should be just as valid.

We need to push our kids sometimes.

The other shift that Vygotsky was really the catalyst for was the idea that we need to push our kids sometimes. (We’ll talk a bit more about this when we discuss Piaget)- But…for context: because Piaget was Swiss and on the Western side of the Berlin Wall, his theories were more widely known and understood earlier. And one of the fundamental differences between Piaget and Vygotsky’s theories is that Piaget really believed that development is purely tied to age. So parents and educators who were more familiar with his theories didn’t want to push children- because they believed they wouldn’t be able to understand it anyway. When Vygotsky showed up on the scene and his theories began to come westward- the idea that we can and ultimately need to push our kids- to extend them- in order to help them achieve higher development- was really radical. Now it seems obvious. But it wasn’t back then.

Language encourages cognitive development by inciting conversations. Because growing and learning don’t necessarily happen “naturally”…humans are lazy. So by provoking conversation- either with our children or between children- we create the environment for cognitive development. Those of you who’ve attended one of my webinars are probably familiar with this idea because a form of therapy I’m trained in- Pivotal Response Therapy- that’s the central idea. No development can happen without language. So we need to provoke language first. That’s the pivotal bit.

And now it’s been proven that executive functions are the main predictor of school success- far more than any academic learning. Children who lack these skills aren’t able to learn in a deliberate manner. I’ll pull a quote from Tools of the Mind:

“Children who lack these mental tools are unable to focus their minds on purpose, consequentially, their learning is less effective and efficient.”

That is one of the big reasons I created the Brain Skills Play Blueprint– to give parents the easy guidance they need to incorporate building those skills into their daily lives in a playful, simple way. Because executive functions are built through practice, and it’s been shown through research that children really develop those skills of self-regulation in the first five years of life.

SO- how can you apply this to your child?!

It all comes back to play. Because everything does. Play is how children create a dialogue between themselves and the outside external world. Playing children are making sense of the world through a process of “inner speech”-  they talk out loud to themselves. And Vygotsky focused mainly on make-believe play because it’s during that kind of play in particular that children extend themselves- the zone of proximal development is inherent in pretend play. Because they’re pretending to be things and in situations they couldn’t be in real life yet. They behave beyond their years in make believe play, so their language and interactions are more advanced then they would be typically. This is something we stop doing as adults because it’s not socially acceptable. At that point we bring the dialogue inwards. And this is why you’ve heard me talk about how we become our child’s inner voice. The words we use, they use. Because they’re internalizing their external world. By the same token- he believed that community had an important role in making meaning…in other words: collaborative play.

Does Vygotsky’s theory bring up any interesting insights about your children for you?

Let me know in the comments! And if you’re struggling with the whole “How do I parent in a way that supports my child’s cognitive development, increases their executive function use, AND is non-punitive and developmentally appropriate”…that’s where my FREE scripts for managing the Top 10 Crazy-Making behaviours come in. It’s a pack of 10 audios- each about 2 minutes long- that teaches you the basics of speaking to your child to encourage those critical thinking skills when it comes to self-regulation and behaviour. All that good constructivist stuff. You can sign up to receive those in the purple box blow this post.