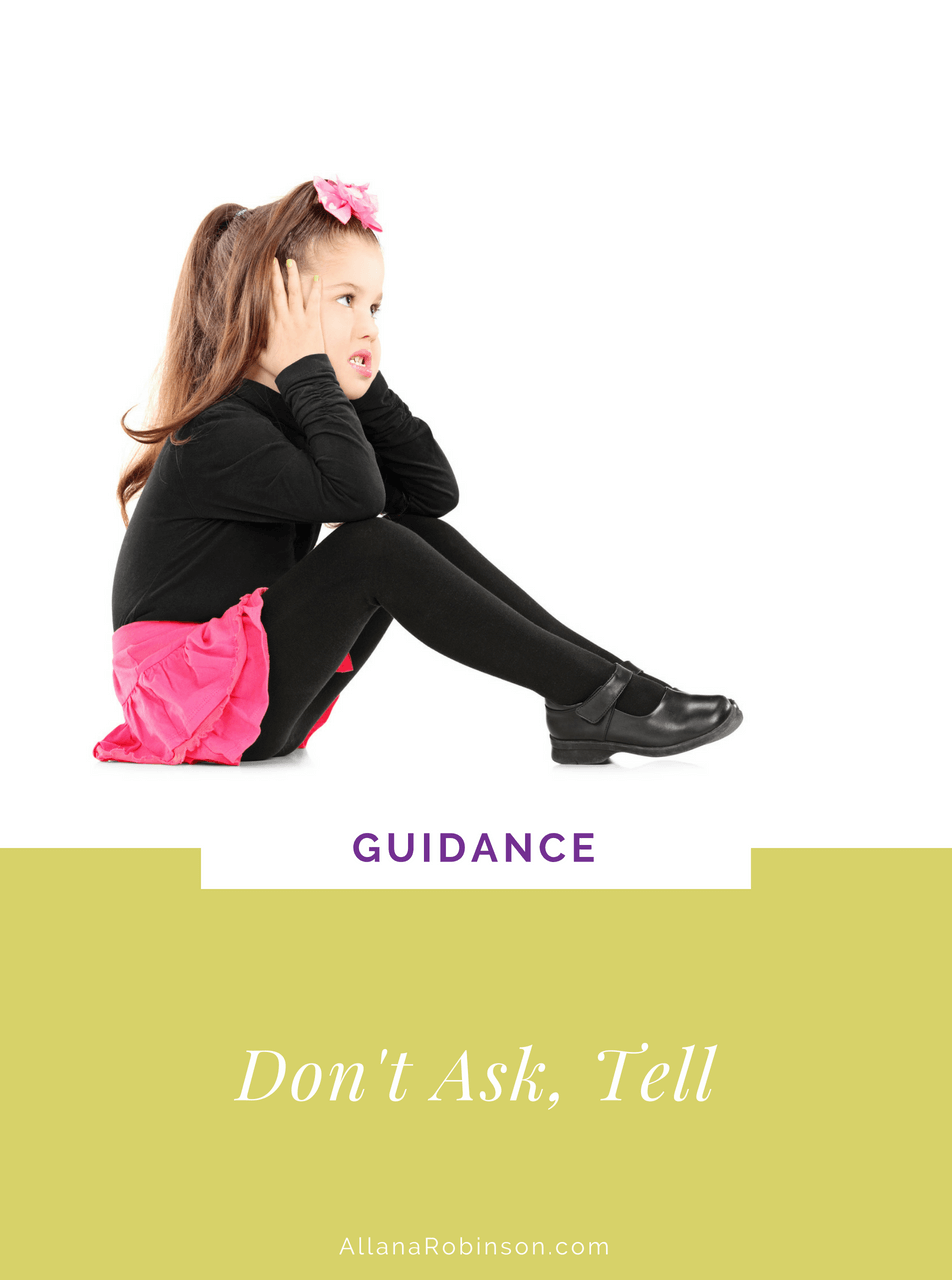 Today, I want to chat about something that EVERYONE DOES which makes your day 100% harder- and that’s asking your kids questions that you don’t actually want answers to.

This topic is something so small that makes such a HUGE difference to your children’s behavior- and that’s that you keep asking them questions that you don’t actually want answers to. This is one of those things that I can almost guarantee you’ve never thought about, but now that I’m bringing it to your attention, it’s going to be like when your friend buys a new car that you’ve never heard of and then suddenly you start seeing them EVERYWHERE, because now you’re aware of it. That actually just happened to me, a friend of mine recently bought a VW Atlas and I’d never seen one before- which is pretty significant because I am generally in about 3-5 stranger’s cars a week installing car seats in my local community. But now EVERYWHERE I TURN there’s a VW Atlas. So this is going to be like that- you will have never given it a second thought, but after I talk you through it you’re going to start noticing it and it’s going to start DRIVING YOU INSANE. Misery loves company.

So you’re getting ready to leave the house, and you turn to your 2 to 5 year old and say “Hey, can you put your jacket on?” And they immediately look at you and say “No!” And then they run away, or they flop on the ground like a fish out of water, or then you get exasperated and go to do it yourself and they FREAK OUT. Who has had that happen to them? Maybe it’s not with outdoor gear specifically. Maybe you’ve asked them if they can go to the bathroom! Or hey- can you go get Mommy ANYTHING? I know this isn’t just happening in my house for a fact because not only am I a mother, but I was a Nanny back in the day, and then I was an early interventionist and I worked IN people’s homes… so I’ve spent my fair share of time observing families up close and personal.

Here’s your homework for this week- I’m going to give it right up front: STOP DOING THAT. STOP phrasing directions as questions. This is YOUR FAULT. And I don’t usually say that to parents- but that reaction is 100% your fault. Because you just phrased something that isn’t an option, as an option. AND THEN you get frustrated and upset when they MAKE A CHOICE! So now they’re confused and frustrated because they just did EXACTLY what you asked them to do, and you’re not happy. And you’re frustrated as fuck because you just asked them to do something SIMPLE that they can probably do in their sleep- or at least with minimal effort, and you’re confused as to why they refuse to do it.

BUT- SO MANY PEOPLE DO THIS WRONG.

If I had a nickel for every time I talk to clients and they’re like “I tried it, and if anything it was worse- because she picked the wrong choice.”

ENH! WRONG! Do not pass go, do not collect $200. THERE CAN BE NO WRONG CHOICE when you’re using controlled choices. You have to be 100% positive- BEFORE giving the choices- that you are 100% okay with them picking EITHER CHOICE. Do you want to walk up the stairs or should I carry you? If my goal is to get them up the stairs, I really don’t care how we do it- I’m good with carrying them up if that’s going to get me to my end game. BUT- If for whatever reason being carried isn’t actually an option- let’s say I’ve got my arms full of baggage- then THAT’S NOT A GOOD CONTROLLED CHOICE! In that instance, I could say “Do you want to walk in front of me or behind me? Do you want to walk up the stairs or hop up the stairs? Should we go up the stairs fast or slow? I’m okay with ANY of those options”– because I just want to get them up the bloody staircase. BUT- by allowing them to make that choice, they feel empowered and in more control of their bodies and lives, and they resist it less.

Another example would be when it’s cold outside and my son refuses to wear a jacket.

OKay- dude- you’ve got two options: You can put your jacket on here in the house, or you can put it on when we get to the store. I REALLY don’t care whether he puts his car coat on in the warmth of the house or in the car at our destination. Personally, I feel he’d be more comfortable overall if he just put his freaking jacket on now, but whatever- being cold for 2 minutes while I run him out to the car and strap him into his car seat isn’t going to kill him. So if that gets me what I want- which is to get out the door and on the road ASAP- that’s fine! Or I’ve offered him his blue snowsuit or his red snowsuit. Either way, he’s going in a snowsuit and outside to play. Which one really is no skin off my back. But I couldn’t- for instance- offer “You can put your jacket on now or we can’t go to gymnastics.” Well, no… we’re going. And if he chooses to stay home, I’m going to end up overriding him and that will negate the effort I put in. So that’s wrong. Don’t do that.

The SAME CONCEPT applies to when you phrase requests as questions.

Can you go get me your dirty laundry? NO! Well… you asked a question- you have an option there- without intending to- but you did none the less. And there was a “bad choice”: the choice to say no. You are SHOOTING YOURSELF IN THE FOOT.

So here’s how you stop it:

First- STOP asking, and START TELLING. Remove the word “Can” from your vocabulary.

It’s SUCH A SMALL TWEAK- but it makes ALL THE DIFFERENCE. Because now they aren’t responding as though there was an option presented to them. Now they’re responding purely to a direction. Which doesn’t mean they’re never going to freak out- but it will dramatically reduce them.

The second thing is- be REALLY SURE that the options you’re giving ARE IN FACT OPTIONS.

And yes, “You can do it, or I will help you.” are valid options. When you stop giving your kids options that aren’t actually available to them, and you stop asking them rhetorical questions- IT’S GOING TO CHANGE YOUR LIFE. Pinky promise.

Now, personally, I think controlled choices are ALWAYS useful- I can’t even really think of an instance where it’s not appropriate- maybe possibly in an urgent safety situation? But if you’re needing a bit of guidance on where to use controlled choices- my scripts for managing crazy-making behavior have some instances where controlled choices will give you the most bang for your proverbial buck. They’re 100% free, I am insanely proud of them- I’ve had people report seeing improvements in their child’s behavior in as little as 5 hours with using them- and you can grab them by going to prnt.link/scripts.

What do you think? Is this something you’re kind of guilty of? Is this something you can see implementing- starting tomorrow morning? If you decide to make this switch- and I STRONGLY encourage you to do so- make sure to come back and let me know what differences you see over the next couple of days, either here in the comments on this video- or come join us in the Parenting Posse, which is my FREE peer support facebook group- it’s open to anyone with a child under the age of 6- so if that’s you and you aren’t a member yet, come join and let us get to know you. I promise we don’t bite. I’m ridiculously proud of the fact that the Posse is pretty much 100% drama free. And as always- if this has been helpful, make sure to subscribe and share so that you never miss any other little nuggets I have for you! 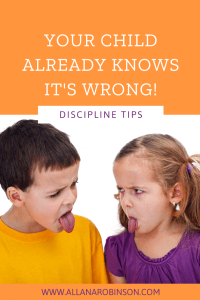