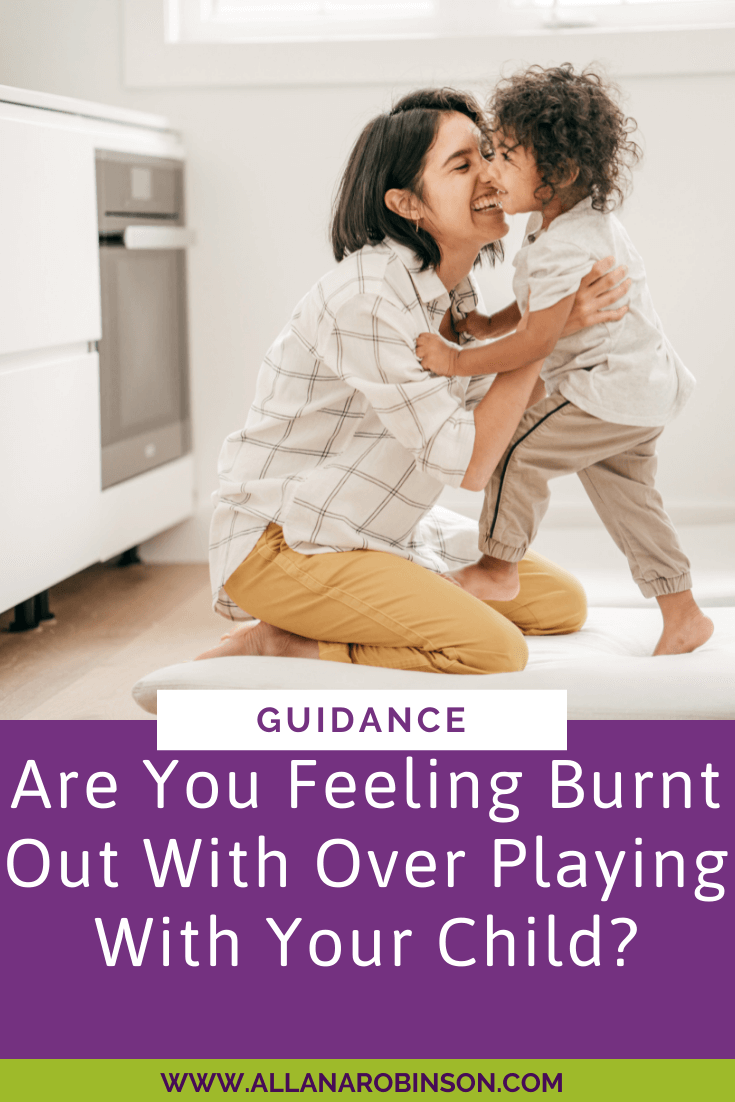 Are You Feeling Burnt Out With Over Playing With Your Child?

There’s been a lot of talk throughout the pandemic about parents and playing with their kids. Parents are feeling guilty about the lack of playmates and being stuck at home so they power through, but it usually ends in tears because they aren’t “playing right” and all they can think about is is their to-do list, all the work that they should be doing, all the household chores, not to mention all the vaccine news, politics, and social issues coming to a head.

Here’s what you need to know about play:

In order for it to have all the brain-boosting, life enhancing, social skills creating goodness that everybody talks about… BOTH PARTIES need to be in a play state.

WTF is a play state?

This is a play state.

This is one of the reasons why short recess and lack of outdoor time is such a hot topic because there’s research that shows it can take children up to an hour to settle into a play state. Which means that for a lot of kids who aren’t given BIG chunks of free play time. They’re just starting to get the benefits of play and then they have to stop.

For you as a parent, what’s the implication of this?

If you’re not in a play state, if playing with your children is a chore for you and you’re basically a warm body that’s TRYING. You’re trying, but you’re just BORED!

You’re not actually helping your child.

You may actually be hindering them. It is really hard to get into a flowy play state when your partner is just not engaged.

This is what they mean when they tell you that you’re playing wrong.

They know that you aren’t on the same wavelength as they are. They can sense it. You’re playing wrong because …

YOU ARE NOT PLAYING.

Dr. Stuart Brown in his book Play: How it Shapes the Brain, Opens the Imagination, and Invigorates the Soul stresses that PLAY IS A STATE OF MIND. It’s not an activity.

When we’re in the play state we attune with those around us, we bond, and we get on the same page. The is the benefit of you playing with your child, this creates bonding. Attunement. Co-regulation. There’s that back and forth happening.

If you’re bored, disengaged, and just plain not into it, NEITHER of you is getting the benefit of the play! You’re not accomplishing what you think you are.

You are not required to be your child’s playmate.

You’re their parent, not their friend, not a clown.

It is not your job to entertain your child!

Does that mean that you can never play with them?

NO. Of course, you can. Do it when it feels engaging and fun and purposeless. What it does mean is that you can let go of that little guilty person on your shoulder telling you that you really should put down the book and get up and play with them. If your child is engaged in independent play and is in a play state, inserting yourself into that breaks the state and removes all the good stuff!

Sit down, read that Sophie Kinsella novel, and do it guilt free.

Find something that you both find enjoyable and puts you both in a play state.

My boys and I, that’s swimming. We all get in the pool and have a grand old time and before I know it my husband is home from work. We can spend all afternoon in the pool together. That’s fun for me, its fun for them, that’s playing with them and that’s great! We don’t have to do it every day, and we don’t have to do it all day. I don’t feel guilty one bit for then telling them no. I am able to tell them “you need to go downstairs and entertain yourselves”. I know once or twice a week we have a specific activity that we both enjoy that we’ll do together.

The last year most of my play with my sons has been card games. They’re 4 and 7 now and they’ve been out of school for over a year at this point- and I have a company to run on top of educating them! I can’t always be playing with them and quite frankly they don’t want me to play with them all the time. They like to play fight and build these little worlds out of LEGO and dress up. I don’t find any of that fun. It’s a drag. I have taught them to play Uno, War And Go Fish. We all enjoy it!

We’ve been drilled on the idea that if we aren’t engaging with our children 24/7. If we’re touched out, bored, frustrated, and overwhelmed, that they’ll be stupid. We’ve somehow landed in this place of being our children’s entertainers. My Mom didn’t entertain me! Her Mom sure as heck didn’t. Somewhere in the last 30 years we got the idea that it’s our job to be our children’s playmates…

you know where this comes from?

There was a study done in the 1960’s by a woman named Marian Diamond which showed that rats raised in what they called an “enriched” environment had larger, more complex brains with a thicker cortex which is where most data processing takes place. This study, even though I’m sure you’ve never heard of it until right now, took hold in the Western society and it spread like wildfire. The idea that stimulating your child all the time was the best way to get them ahead in life took hold.

Here’s the thing: Diamond later explained that what she meant by “enriched”environments were once filled with play. The rats were exposed to a wide variety of toys, and they socialized with other rats. Diamond, as a female scientist, in the 1960’s, was getting ridiculed for being the girl who plays with rats. She changed her language to get her research taken more seriously.

What an intense impact that’s had on how we raise our kids!

Especially now that the new science is showing how important self-regulation is!

You don’t have to be stimulating them all the time. They just have to have lots of opportunities for play and that doesn’t require us.

STOP SAYING THAT YOU NEED TO WORK ON THEIR INDEPENDENT PLAY.

They do! This isn’t your job. Play is the work of childhood. What you need to do is give them the time and space to do that work, to practice.

I think that might actually be the hardest part of prioritizing independent play is holding yourself back from doing something! This isn’t something we can do for them. The absence of doing something is really hard. It’s okay if they get upset. It’s okay if they get frustrated. Children who are used to being entertained are going to have an extinction burst. It’s going to happen. That’s okay. It doesn’t mean you were indispensable and they’re totally screwed because they have no independent play skills. It just means the status quo has changed.

It’s frustrating and uncomfortable when the status quo changes. Acknowledge that, but don’t let it derail you.

Let go of the guilt!

Put your focus on giving them the space to play independently. Find an activity or two that puts you both in a play state and schedule that in once or twice a week.

You don’t have to play with your kids! unless you WANT to!

If you’re struggling to identify a common play interest with your kids or you want some guidance on how to ease your children into independent play.

The Parenting Posse group is full of parents who are all working on the same goals and I invite you to come join us!